The following is a firsthand account by Barbco’s customer Brent Scarbrough & Company of Fayetteville, Georgia. Barbco is located in the heart of the Marcellus and Utica shale plays is a world-class manufacturer of capital equipment for the trenchless excavation, horizontal directional drilling, and underground manufacturing industries.

These bores were under an active Florida DOT highway, but also under a major 36” high-pressure gas main.  We were told that this gas main is the highest pressure main in the southeastern US.  The project required 3 ft separation under this gas main, which is why it was about 21 feet.  We had to not only meet all of the requirements and restrictions of the owner, Mosaic Fertilizer, but also Florida DOT and Gulf Stream Gas. 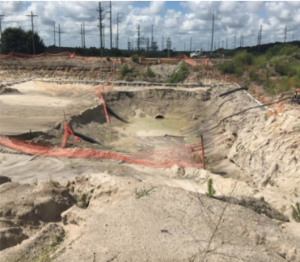 We had originally bid the job, but it was awarded to another contractor.  The other contractor started the job but had a lot of problems.  They had installed about 100 feet of 48” casing when they experienced settlement of the ground above the end of the casing, which was within the FDOT right-of-way – but just outside the highway pavement.

With the problems they were having, the owner (Mosaic) and (with influence from FDOT) terminated their contract.  The owner had to inject grout into the ground around the end of the casing to stabilize the ground and prevent further settlement and potential damage to the highway and potential interruption of traffic.

At this time, the owner approached us about revisiting the project.  We went and met with them and they wanted to try to salvage the 48” casing that was in place.  We collectively decided that attempting to simply start again with the 48” casing was not a good idea – it has been in place for several weeks at this time.  So, it was determined that the best approach would be to install a new 42” casing through the existing 48” – and into and through the grout fill that was placed to mitigate the ground settlement.   So, it was determined that due to these circumstances, the pilot tube system was not the right approach for this one.  So, we embarked on a conventional, non-steered jack and bore of the new 42” casing through the existing 48” casing.  We felt like although it was a little risky to attempt a 500 foot bore without any steering capability, with the circumstances we were dealt, this was the best approach.  We did encounter some dense, rocky material, but this bore came in very close to line and grade.

So, when it came time to do the second bore (48” x 500 ft), we elected to use the same method as the first – since it was very successful.  The idea was that if it worked once, it would work again.  While performing this second bore, we encountered rock at about 280 feet in – the other side of the highway.  After several hours of “grinding” on the rock and running very high pressures on the rig we felt like we had to do something different.  So, stopped the bore and pulled all of the auger back so that we could exchange the “sand head” for a “rock head”.  Well, when we pulled the last section of auger out, the head was not there – it had come off at some point during the bore or retrieval (of course, we did not know exactly when or where it had come off).  We knew that the end of the casing was outside of the highway – between the highway and the bypass road that had been constructed to facilitate the dragline movement through the area.  So, we decided that we needed to dig up the end of the casing to see if we could at least see the head. 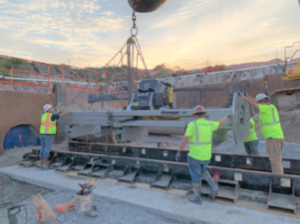 We were able to see the head and the end of the casing, so we placed the new rock head onto the auger and fed it all back through the casing to resume the jack & bore.  We were able to push the original head out the end of the casing and extract it out of the hole with the excavator.  Once the original head was successfully extracted, we quickly backfilled the hole (which was saturated with groundwater) and resumed the jack & bore.  We completed this second bore, but it was rather difficult due to the very dense coral rock we were boring through.  This second casing came in several feet off of line and about 10 feet lower than plan grade, but was deemed acceptable and usable by the owner.

We had some decisions to make regarding the last two bores.  We had one in place that was very close to line and grade and one that was off by several feet.  We knew that we were going to encounter this same dense coral rock material again on these other bores – at around 280 feet or so into the bore.  We elected to utilize the Barbco Pathfinder pilot tube system (which had been our plan all along, but had not yet been utilized due to the circumstance described above).

While we knew that we were going to encounter this dense rock material, we also knew that the first 280 feet or so of the bore was going to be through typical central Florida sand – therefore, we felt like we still needed to start the pilot tube with a conventional head.  We did weld some rock bits onto the Pathfinder head.  The thought process was that by adding these enhancements to the pilot tube system, we might be able to get these other bores through this rocky material without having to stop and pull everything out and do something different.  We felt like that was a gamble worth taking.  Well, when we go to the rock (as expected), the progress slowed to a crawl and the rig pressures skyrocketed.  So, we decided that we did need to stop the pilot tube work and exchange the conventional head for a steerable roller cone head in order to penetrate the rock.  After making this exchange, we resumed the pilot tube work and got it all the way across – and, it was within a few tenths of line and grade.

We were then ready to begin the pilot tube guided jack & bore.  Knowing that we had to get through the rocky material, we elected to utilize a 24” flat-face rock head and we also enhance both the 24” head on the lead auger/casing and the 48” primary 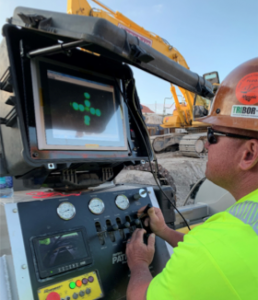 head/casing by welding on some additional rock bits.  Then, we also had the custom made 24” to 48” knife reamer built by Barbco.  The “knifes” were fabricate from high-strength 2 inch thick steel.

The owner’s rep (Jose Cueva of Fluor) expressed concern that we did not think that the system was going to penetrate and break up the rocky material.  His words were “…I have my doubts that you will be successful when you strike the “hard rock”.  He was looking at the setup of the 48” end of the transition knife reamer with the 48” auger inside – he could not see the 24” head and auger as it was already in the ground at the time.  We explained to him that the combination of having 5” steel pilot tube already across and the 24” rock head and the knife reamer transition piece were all going to work together to break up the rock and allow the 48” casing to be pushed across and bring the augered material out.

Although it was a little slow grinding through the rock, we were successful in getting this bore done and it came in within a few tenths of a foot from plan line and grade.  The owner was very pleased.  We then repeated all of the same processes for the fourth and final bore on the project and it had the same results. 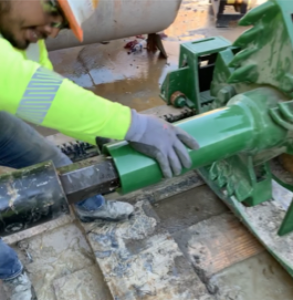 Not long after successfully completing these last two 500 ft bores on this difficult project using the rented Pathfinder pilot tube system, we decided to buy the system.  We would not have been able to be as successful as we were on this project without this system.  We believe this investment will help us on future projects – including a recently awarded new contract with Mosaic on a nearby similar project.

Barbco, Inc, located in the heart of the Marcellus and Utica Shale plays is a world 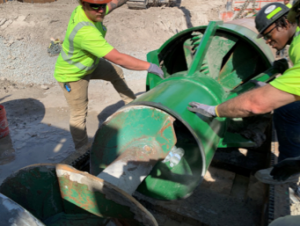 class manufacturer of capital equipment for the trenchless excavation, horizontal