Berkeley has flipped out again and this time it’s bad. The city council is banning natural gas (they think) to build up their green street cred, but… .

Several readers forwarded me an article that has to be read to be believed. There are no words adequate to describe the degree of craziness. Suffice it to say it measures the equivalent of 10 on the Richter scale for political lunacy, even for Berkeley, the most radical city in the most radical of these 50 states. Berkeley, California has always stood out as the vanguard of wackiness but now it has descended down to the ninth level and made a suicidal energy pact with itself. It has banned natural gas in new buildings and hired a $271,000 apparatchik to make sure the trigger is pulled, much like the guards Jim Jones ordered to make sure the folks at Jonestown drank the poison.

Here’s the essence of the story, from CNS News (emphasis added):

The Berkeley, California City Council has authorized paying a $273,341 annual salary to a new position dedicated to implementing the nation’s first ban on natural gas in new buildings.

On Tuesday, the council approved an ordinance proposed by Councilmember Kate Harrison, effective January 1, 2020, on any new buildings, requiring all new buildings built to have electric infrastructure and banning natural gas energy:

1. Adopt an ordinance adding a new Chapter 12.80 to the Berkeley Municipal Code (BMC) prohibiting natural gas infrastructure in new buildings with an effective date of January 1, 2020.

2. Refer to the November 2019 budget process for consideration of allocating up to $273,341 per year from excess equity to fund a two-year position in the Building & Safety Division of the Department of Planning and Development. The staff person will assist with implementing the gas prohibition ordinance and reach codes, and perform other duties as specified in the Financial Implications section of this item.

The initial version of the proposal called for creation of a “career” (permanent) position, which was revised to a two-year job before passage. Under “Financial Implications,” the council explains the position’s duties:

Staff time will be necessary to implement the new permit regulations.

Staff estimates that the total annual staff cost for a two-year position to implement a gas prohibition ordinance and reach codes would be $273,341 per year, funded from excess equity. The position would be in the Building & Safety Division of the Department of Planning and Development.

The staff person would also:

Mayor Jesse Arreguín warned of the “cataclysmic impacts” of climate change in his endorsement of the ordinance at the council’s meeting, The San Francisco Chronicle reports:

“I’m really proud to be on this City Council to adopt this groundbreaking ordinance. … We know that the climate crisis is deepening and is having cataclysmic impacts.”

Putting aside the penchant for overstatement that is the hallmark of all activists, true believers and useful idiots, there are two things that stand out here. First, is the fact Berkeley supposes substituting electricity for natural gas will somehow make a huge difference or even demonstrate the good intentions of the city council. You have to be truly ignorant to believe that as “natural gas-fired power plants fueled more than two-fifths of the total in-state net electricity generation.” There’s also this:

So, Berkeley is going to substitute electricity produced from a mixture of coal, renewables, natural gas and nuclear for natural gas. Symbolic and stupid; captured together in a single display of green political madness.

The second thing that stands out is that Berkeley is going backward on energy just as it is on free speech. Does the city imagine new building will take place without access to natural gas? At last count (2017), the Census Bureau estimates 86% of owner-occupied housing units and 62% of renter-occupied units relied upon natural gas. Sounds like it’s very much the fuel of choice and for good reason, because it’s clean and inexpensive, a step forward for life in Berkeley from the days of coal-fired electricity at some of the highest rates in the nation. Too bad, the city council says you can’t have any more even most of them undoubtedly live in gas-supplied homes.

Berkeley, of course, is simply wearing a green arm band to tell us how superior it is, much like its sister city of Los Angeles to the south. But, it ought to consider this from the Washington Post:

In recent years, Los Angeles received up to a third of its electricity from a coal-fired plant in Utah, the Intermountain Power Plant, which is set to shutter in 2025. But in its place, Los Angeles is planning to open a natural gas-fired plant, “even as it works to shut down three
gas plants in its own backyard,” the Los Angeles Times reports in this deep dive. “Critics say Los Angeles and other Southern California cities have no business making an $865-million investment in gas, especially when the state has committed to getting 100% of its electricity from climate-friendly sources such as solar and wind.” “I don’t know how he reconciles his new position with going ahead with that,” S. David Freeman, a former general manager of the Los Angeles Department of Water and Power, said about Los Angeles Mayor Eric Garcetti, who has pushed his version of a “Green New Deal,” which includes closing three local gas plants.

As the reader who sent this to me notes, “this is what happens when the reality of current needs hits a wish list for the future.” Berkeley, though, has never been about reality. I’ve visited there a few times and even stayed in the Claremont on one occasion. This beautiful hotel and spa, although too uppity for my taste, offered a sharp contrast and welcome relief from the seedy college town environment adjoining it. Walking downtown was a like visit into another world where the buildings and hippies just grow old and never grow up.

Berkeley isn’t dying, though. It’s adding housing units but they’re hugely expensive with a median value of $861,800 and more than 35% of owner units being valued at $1,000,000 or more. Some 48% of renters pay out more than more than 35% of their incomes in housing costs. Incomes, too, indicate a big problem similar to that of san Francisco across the bay. It is a city of the poor and the very rich, with a disappearing middle class. Check out this chart, plotting the latest stats from the Census Bureau: 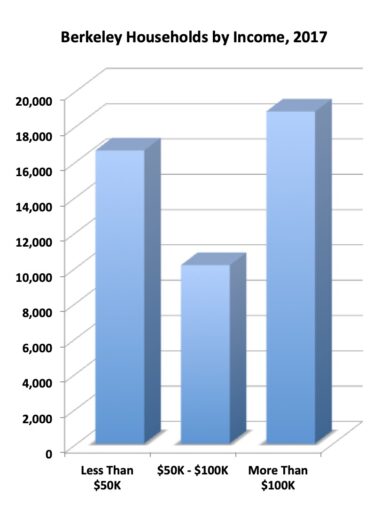 What we have with this natural gas ban, therefore, is Berkeley’s gentry class saying “no gas for you” to a middle class already being squeezed out. Housing prices and rents will go up even further and no one will build anything there except for the wealthiest of the wealthy. The middle class will continue to disappear, the poor will go on being poor and the city will remain a dingy center reflecting its inglorious past as the hills become ever richer.