Andy Dinniman is a big fellow and, appropriately enough, he has failed bigly in Commonwealth Court as a panel of judges has ruled he never even had standing.

Pennsylvania Commonwealth Court today reversed a June 2018 order by the Pennsylvania Public Utility Commission that resulted from a taxpayer-funded lawsuit brought by Sen. Andy Dinniman. The court ruled that Sen. Dinniman lacked either legislative or personal standing to file the complaint and seek emergency relief against the builder for the Mariner East pipeline network. The court’s order ultimately dismisses the complaint against the company. 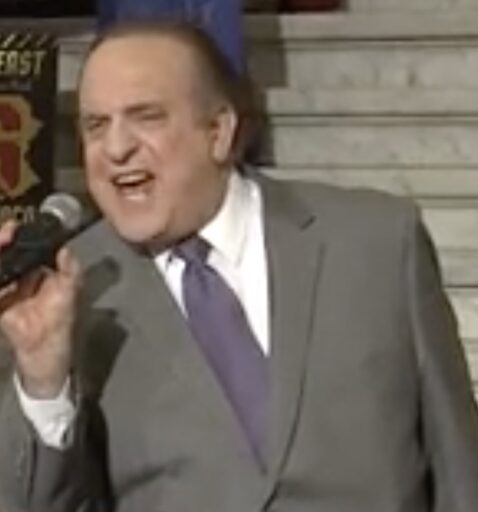 Dinniman at Harrisburg anti-pipeline rally before Commonwealth Court ruled against his frivolous lawsuit.

It is our hope that this affirmative ruling finally puts to rest the many baseless claims of legal improprieties that a few anti-pipeline activists have tried to raise about this project.

We continue to see the courts rule in favor of the pipeline because it is a legally permitted project that underwent years of public scrutiny before a shovel ever hit the ground, and it continues to be tightly regulated.

The only unfortunate turnout of this ruling are the questionable use of taxpayer dollars spent by Sen. Dinniman’s to pay for his lawsuit, which the court clearly found was based on faulty arguments.

Now that Mariner East once again has been affirmed by the courts, it is time to get the project completed and in operation to produce the countless benefits it is promised to deliver for Pennsylvania.

Editor’s Note: The Commonwealth didn’t just find against Absent Andy Dinniman; it demolished his arguments and exposed his taxpayer-funded lawsuit as a frivolous exercise. He should have known better as a State Legislator, and probably did, but he apparently imagined he could get away with it. He did get away with it for a bit when he was only dealing with the Public Utility Commission, but the Commonwealth Court was a different matter. Big Andy went down bigly. Here are a few choice excerpts from the decision:

The Senator testified that he does not “live in the valley where the problems are.” It is undisputed that construction of ME2 and ME2X has had no adverse effects on his property or public water supply. The fact that the Senator resides in the Township, two miles from the pipelines, is not sufficient to show that he is aggrieved by their construction or operation…

We hold that the PUC erred in concluding that Senator Dinniman had personal standing to file a formal complaint against Sunoco simply because its pipelines are located in the Township where he lives. The Complaint alleges neither harm to Senator Dinniman’s property nor harm to his person, and the hearing before the ALJ did not yield evidence of either type of harm…

Senator Dinniman explains that he filed the Complaint to force the PUC to “review, elucidate and improve upon the safety of a specific public utility, as operated within his district, which affects the health, safety and economic stability of his constituents.” Though Senator Dinniman desires to “protect and advocate for his constituents[,]” this desire does not constitute a basis for legislative standing. Legislators are sent to Harrisburg to propose legislation and to vote for or against proposed legislation. Legislators are not elected to serve constituents in a parens patriae capacity, with either the duty or the authority to file lawsuits on behalf of constituents who may, or may not, desire such assistance.

It seems the Commonwealth Court knows exactly who Andy Dinniman is and what he’s about.