The Pennsylvania election may still be up in the air Presidentially speaking, but it is clear blue collar centrists won the day over radicals.

The Pennsylvania election results are being challenged as I write this post. Joe Biden claims it and Donald Trump says that isn’t so, as the debate over who won and the extent of fraud proceeds in the courts. Nonetheless, one thing is clear; the attempt by fractivists and other leftist radicals to sell an anti-gas meme didn’t work. Regardless of the final outcome, blue collar centrists, some of whom voted for both Presidential candidates, prevailed. Fracking opposition was a dog that didn’t bark unless you’re looking at the internal dynamics of Democratic Party politics, where it has created a deep chasm between left and blue collar centrists within the party. 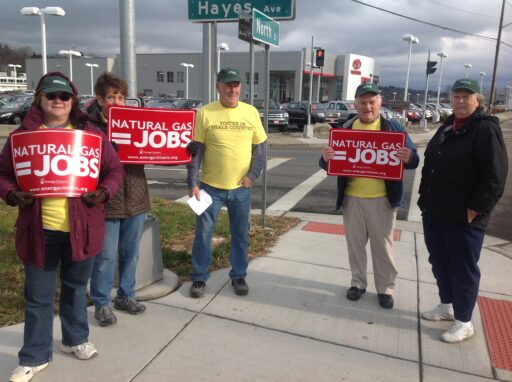 Labor has been increasingly concerned with the leftist drift of so many in the Democratic Party as it the latter has surrendered territory to environmental extremists who want to ban fracking and construct no more pipelines. Some trades, such as the Boilermakers, made the big switch and went for Trump while others leaned on Biden to back off his anti-fracking position and, after a supposed softening in his stance, endorsed him. Therefore, whether you’re a Democrat or a Republican, the blue collar centrists had their way and, frankly that’s a good thing.

The dichotomy within the labor movement is emblematic of a battle long brewing between progressive/far left factions and blue collar centrist voices in Democratic Party both statewide and nationally. Elitists who fund the party (mostly trust-funders spending capitalist wealth created by their parents and grandparents) are sympathetic with radical enviro view. This is attributable to factors. One is the fact that elitists gotta be elite; separated from the commoners with open space moats around them and wilderness playgrounds to visit. Therefore, any initiative that stifles development, progress of any sort or growth is a welcome event for these folks.

Secondly, there is the guilt thing, of course; the emotional desire these trust-funders have to support supposedly noble causes as a way to assuage their self-imposed sense of having done undeservedly well and wanting to be as successful as their parents while also claiming moral superiority.

None of that worked for these folks in this election, though. Blue collar centrist voices and rural voices across the Commonwealth either went for Trump or supported Biden with the caveat that natural gas production is critically important to Pennsylvania and must continue, regardless of the politics of other things. Energy security and the economic development produced by fracking are now givens. Period. There is no debate. The proof is to be found in the fact these centrist voices rejected the far left and voted for local GOP candidates who largely supported fracking as far too many Democrats tried to ride the fence (at best) or sided with the extremists. Indeed, Pennsylvania’s Congressional delegation will be the same, Republicans picked up three in the State House GOP and at least one seat in the State Senate.

Blue collar centrists support jobs, the energy industry and main street revitalization; they have rejected the Green New Deal and other progressive, far left energy ideas of twits such as AOC. Utilization of low cost clean natural gas produced in Pennsylvania is helping small main street communities such as Montrose and Tunkhannock with business development and job growth as new distribution systems have delivered the gas to them for the first time. Urban families, at the same time, have seen energy bill savings with rates as much as 50% lower than other Northeast states. Natural gas substitution for coal has, too, cleaned our environment by reducing carbon dioxide emissions big-time but, even more importantly, reducing other emissions such as SO2 to nearly zero.

Yes, on election day, Pennsylvanian’s rejected the premise that extraction and usage of natural gas should be frustrated or halted. They instead embraced both and gave their votes to those who stood by natural gas development, rejected fracking demonization and advocated for pipelines. Natural gas is the future of Pennsylvania’s economy and will continue delivering benefits to every Pennsylvania, especially the blue collar centrists who just made their voices heard loud and clear, irrespective of who they supported for President..