The Broome County Solar Farm is operating and the energy produced, compared to predictions, illustrates the futility of powering New York with solar energy.

Vic Furman, who frequently guest posts here, has been challenging the wisdom of the Broome County solar farm from the beginning. Recently, the facility have been operating for some time, he decided to file a Freedom of Information request for the operating statistics. The County fulfilled his request and it shows the absolute futility of Governor Cuomo’s plans to power the Empire State with solar and wind.

The Broome County solar farm has been the subject of previous NaturalGasNOW posts here, here and here. The thing makes no economic sense for ratepayers and taxpayers as a whole. Whatever Broome County gains, someone else loses big-time. That much we already know, but the data recently released to Vic Furman, shows us much more. Here is the original data from the County: 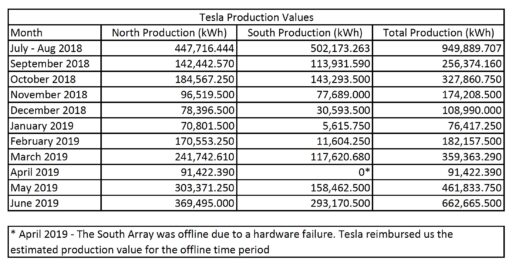 It encompasses a full year of operation. The South Array wasn’t producing in April, 2019 due to hardware issues but that’s part of the deal with any power source. There will be downtime. So, the data provides us with a nice picture of what a solar farm can produce in the way of electricity, but how does it compare to what was predicted?

Well, when it was announced in December, 2015, the Broome County Solar Farm was described this way (emphasis added):

By this time next year, the county expects to have a four megawatt solar farm installed at the Broome Corporate Park in Conklin, producing enough juice to power about one quarter of the county’s total demand…

New York will subsidize the installation with a $1.5 million grant through its NY Sun initiative, a $1 billion program designed to spur development of renewable electricity throughout the state…

Across the state there are more than 70 government-sponsored solar installations, according to a New York database, but electric generation capacity of the Broome County solar array will be among the largest in the state. Four megawatts of electricity is enough to power about 3,200 to 4,000 homes.

Another story from July, 2018 upped the numbers in at least one respect but lowered them in another:

The solar farm was built on county property in Conklin, consisting of two separate arrays. The size of the north and south arrays generate about 5.2 megawatts. The panels create energy that is measured in kilowatt-hours, with one kilowatt-hour is the amount of energy it takes to power a 100-watt lightbulb for 10 hours.

It’s expected to produce about 6.1 million kilowatt-hours of energy in its first year, enough electricity to power 567 homes, on annual average.

The spread from 567 to 4,000 homes in these two claims illustrates how difficult it is to get the truth about solar. Reporters generally don’t have a clue what a 5.2 megawatt system means and proponents are all to eager to have the public believe wild estimates of numbers of homes served and the like. The actual Broome County Solar Farm data tells us the truth, though, and it isn’t pretty.

New Yorkers homeowners use, on average about 6,500 kWh (6.5 mWh) of electricity annually The number is relatively low because so many homes in the cities are heated with natural gas. Using this number, however, tells us the 6.1 million kilowatt hours should heat 938 homes, not 567. Presumably, the number reflects the fact Broome County is not New York City and electricity demands are closer to the 10,750 kWh (10.75 mWh) implied, which is about the national average. Regardless, let’s go with it, but what happened to the other 3,000 or so homes everyone was told about in 2015?

The answer lies in understanding what a 4 MW or 5.2 MW system really is and it tells us everything. When someone says it’s a 4 MW system that means it’s capable of producing 4 megawatt hours of electricity in a given hour. Lazy reporters and readers interpret this to mean it will produce 4 megawatts per hour average. They then multiply by 24 hours and 365 days to get 35,040 megawatt hours. Divide by 10.75 mWh per home and, “et voilà,” you get slightly over 3,200 homes. Adjust for New York’s generally lower electricity use and get whatever number you want, 4,000 or higher.

There’s just one problem; the sun doesn’t shine 24 per day, 365 days per year. Not even close. So, the nameplate capacity—that is the capacity in a given hour—is worse than 100% meaningless. It serves to perpetuate a lie. The 2018 analysis is better because it talks about actual generation as well as nameplate capacity. The latter is stated as 5.2 MW which, applying the above analysis (5.2 MW x 24 hours x 365 days) yields an equally false projection of enough power (45,552 mWh) to serve a theoretical 4,240 homes or so, except this time it is acknowledged actual generation will be far less, only enough to serve 567 homes we’re told.

Now we’re getting somewhere. The ratio of 567 to 4,240 is 13.4%. That is what is known as a capacity factor. It means the Broome County Solar Farm, by the developers’ own admission, will only produce 13.4% of what we’re told it could do based on the nameplate or installed capacity figure. The average figure for solar in the U.S. is somewhere around 25%, meaning New York is a very lousy place for solar by any standard. It means Cuomo’s plan to do 6 gigawatts (6,000 MW) of utility scale solar and serve a million homes by 2025 (a mere six years from now) is really a plan to do but 800 MW and serve maybe 652,000 homes. The fact he only talks about a million homes is, itself, an admission the 6 GW means nothing.

But, is it even that good? No. Here is a little analysis of the actual Broome County figures from above: 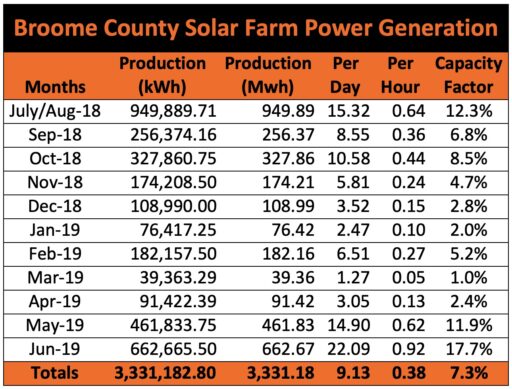 The supposedly 5.2 MW system is producing an average of only 0.38 megawatts per hour or 7.3% of its capacity; a figure that plunges well below “lousy” down to the abysmal depths of failure. It is only producing slightly more than half of the already lousy 6.1 million kWh of electricity predicted just last year when an attempt was made at projecting realism for change. By the proponents’ own standards it is an abject failure and only producing enough power for 310 homes at a humongous cost to all ratepayers and taxpayers. Worse, every bit of this power has to be backed up with other power 92.7% of the time. It is a complete and foolish waste and why New York is such a mess. This is solar reality in New York, the land of the too rapidly setting sun.