The Children’s Horse Show in Wyoming County was not only a big success but also a sign of what makes rural America so very special.

Several grassroots organizations have been formed in the course of the ongoing pandemic to keep young people active and in pursuit of their interests. Among them is the Endless Mountains Riding Club (EMRC), members of which have been conducting equestrian shows for area families at the Wyoming County Fairgrounds. 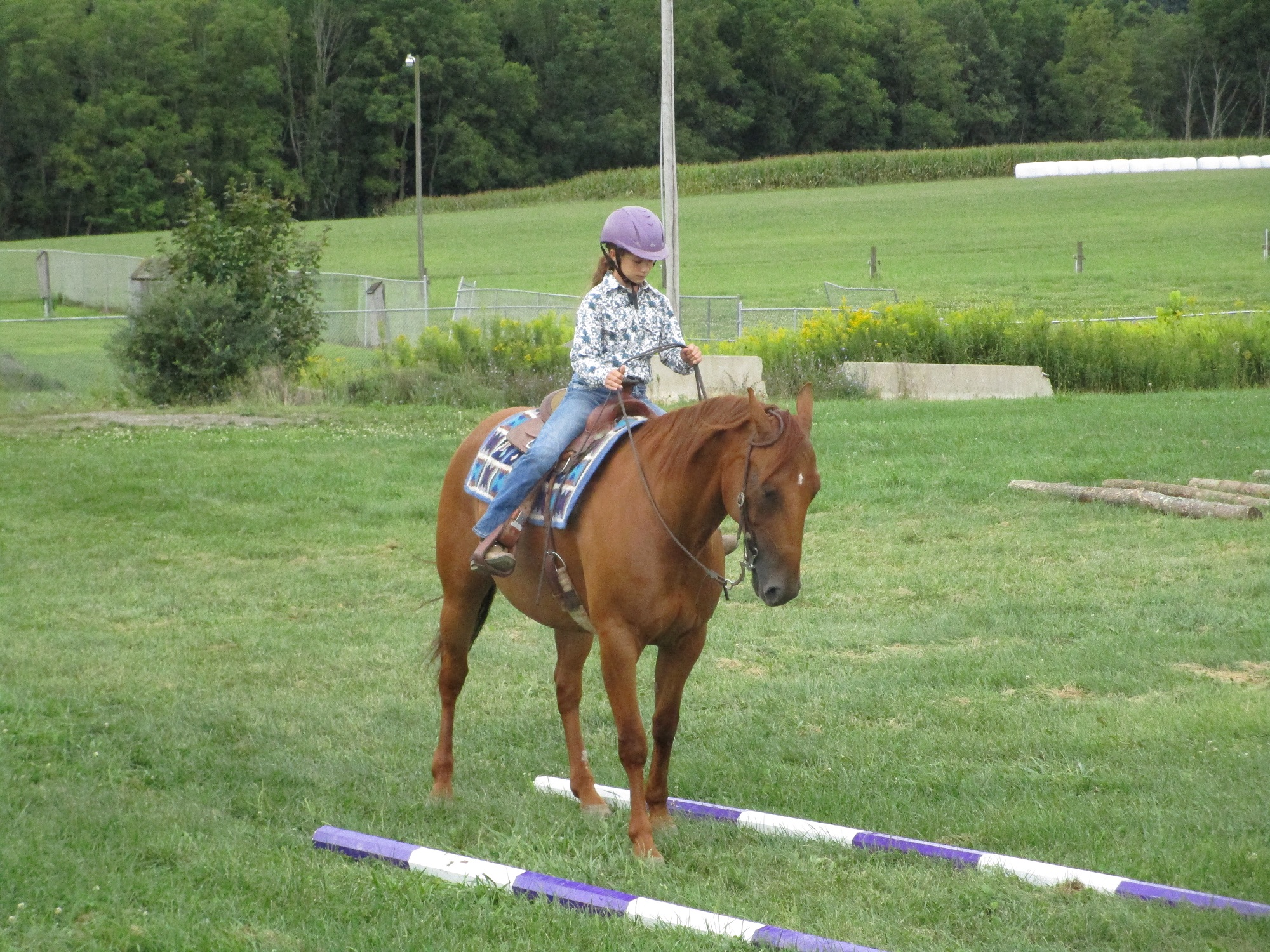 Gracie Coyne of Dallas and her horse, Betty, methodically move through the Trail division course.

On August 29, more than 50 young horse handlers and riders took to the Fairgrounds for the Children’s Horse Show. The 57 sponsored divisions included English, Hunter, Western, and Ranch, as well as trail exercises and many opportunities for beginners.

The event got off to a wet start as remnants of Tropical Storm Laura moved through the area. The rain may have impacted participation a little, EMRC president Jacqui Hunter suggested, but it couldn’t stop the show. “We just rode through it,” she remarked. “And we do have a very good crowd here today.” 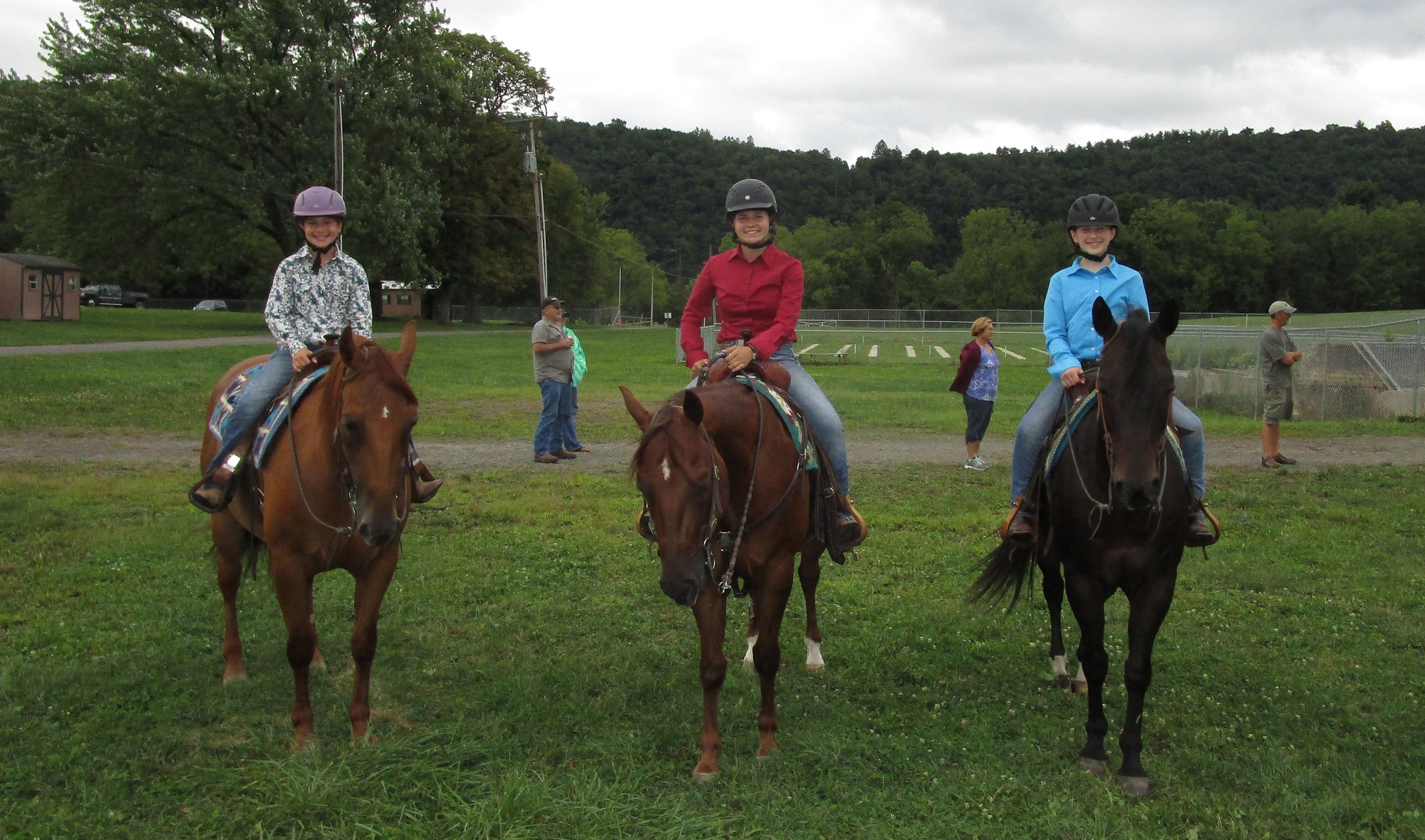 Representing SSR Performance Horse of Dallas at the show were (from left) Gracie Coyne on Betty, Issie Westler on Nash, and Erin Duffy on Rock. Issie and Gracie later garnered Grand and Reserve Champion awards, respectively, in the Ranch Open division.

Horse shows are equal parts ceremonial, cerebral, and an exhibition of skills and sportsmanship. Participants not only take handling horses seriously, key elements of the sport include their own appearance and the way they conduct themselves.

The EMRC was formed this summer with the specific purpose of keeping young riders active in the sport after the majority of equine activities were canceled due to the coronavirus pandemic. It was the fifth event that the organization had conducted at the fairgrounds. 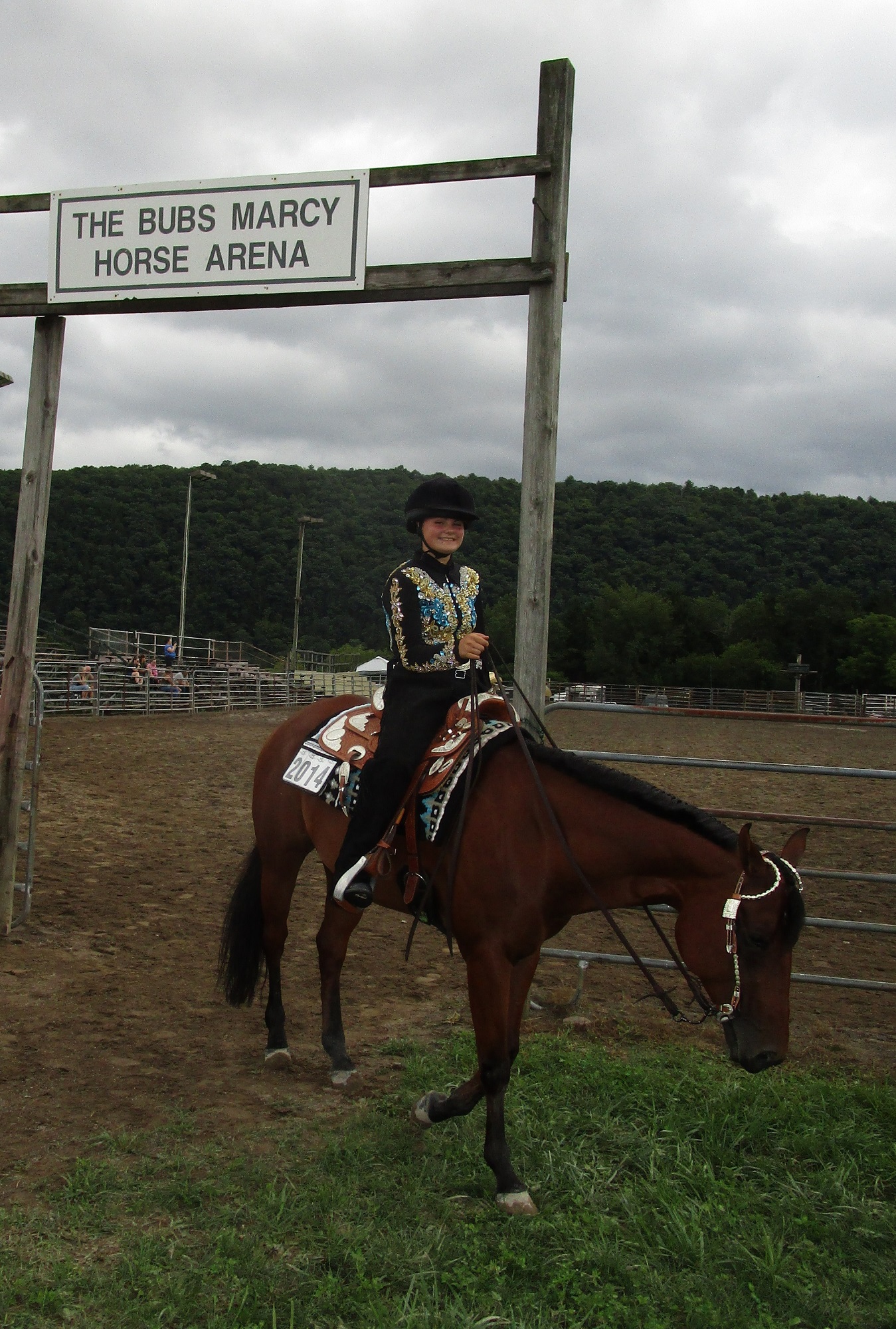 “This is the only place that has had consistent shows,” said Bailey Millard of New Milford, who sat astride her horse, Danny. She and her friend, Saige Bach, of Meshoppen had also taken part in a sorting competition the previous week. Other EMRC activities, like a full-slate ranch show earlier in the month, have allowed the girls to see more of their friends.

Jamie Johnson of Wyalusing agreed that there was not a lot for her daughter, Kayden, to do earlier in the summer. She expressed gratitude for EMRC volunteers and their financial supporters for keeping the youths engaged.

According to Sam Bach, her daughters would normally be camping and going to the beach. But Sage and her younger sisters, Aspen and Brooke, have applied themselves instead this summer to their horses and ponies.

“It is our goal as an organization to provide good quality shows,” Hunter remarked. “Hosting a show is a ton of work. Securing judges, equipment and facility, and insuring that the footing and all the grounds are ready takes a lot of time and dedication.”

Parents from Bradford, Susquehanna and Wyoming counties collaborated with the EMRC to provide the prizes for the children, while a wide variety of businesses, including tack suppliers, boarding farms, veterinarians, breeding facilities, and Cabot Oil & Gas Corporation helped cover operating expenses and other materials costs.

“We at Cabot are continuing to look for ways to support the communities in which we work to offset the many life challenges related to the coronavirus pandemic,” said Bill desRosiers, Cabot’s manager of external affairs. “Seeing the pride on the faces of the young contestants made the Children’s Horse Show particularly special for us.”

“We are committed to helping the youth in the equine industry and, without the help of our sponsors and volunteers, this could not be achieved,” Hunter stated.

Editor’s Note: There’s nothing like a horse show involving local children working with animals 15-20 times their weight and making them behave. It requires all sorts of skills, but also a deep appreciation of what rural life is all about. The natural gas industry is what makes in sustainable in places such as Wyoming County.