[Editor’s Note: China let its virus loose upon the world and is now using it to build energy reserves, while pretending to be a renewables leader.]

China is considered a developing country for purposes of the Paris Accord and certain trade treatments, despite it being the second largest economy in the world. As such, China, the largest emitter of greenhouse gases in the world, pledged to increase its greenhouse gas emissions until 2030, at which point they would begin to decrease, according to the Paris agreement. Recently, China indicated, it would be carbon free by 2060.

Despite these comments from China’s government, the country is constructing 250 gigawatts of coal-fired generating capacity—more than the entire coal fleet in the United States and adding it to the over 1,000 gigawatts of coal capacity it already has—about the size of the entire generating capacity in the United States including all technologies. And, now China is taking advantage of the low oil prices resulting from the demand destruction from the coronavirus lockdowns by building storage capacity and importing crude oil.

China, the world’s second largest oil consumer, has already pumped an extra 310-600 million barrels of oil into storage this year—more than a month’s usage. Private refiners and storage operators are expected to put about another 100 million barrels of new tanks to use in 2021. The planned new tank builds for 2021 compare with expanded tank space of about 110 to 140 million barrels this year. The new tank space is concentrated in China’s eastern refining hubs in Shandong and Zhejiang, and in northeastern Liaoning. Tanks can be leased to refiners and traders, which helps to smooth the supply chain inside China after heavy congestion at some key ports this year delayed tanker unloading.

China’s oil storage has traditionally been owned by state companies and the country’s Strategic Petroleum Reserve (SPR), but over the past four years, private firms have taken a larger role after they were allowed to import oil. Private refiners, storage firms and port authorities accounted for nearly half of this year’s inventory build. That trend is expected to continue as the government lowers thresholds for private firms to participate.

Hengli Petrochemical more than doubled its storage space in 2020 to 43 million barrels. 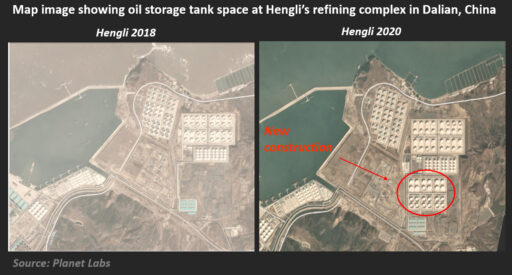 China is the world’s top crude oil importer, having surpassed the United States in 2017. China’s crude oil imports increased in 2019 due to its new refinery capacity and strategic inventory stockpiling, and fairly flat domestic oil production. 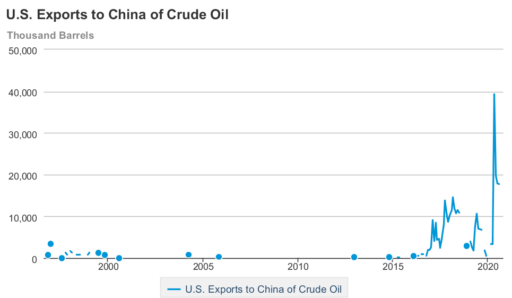 China is not acting like it is on a carbon-free venture because they are building coal-fired power plants and stockpiling crude oil, which they are getting at low prices due to the demand destruction from the coronavirus lockdowns. They have diversified their sources of crude oil imports getting them from OPEC, Russia, Brazil, and now the United States, as the ban of exporting crude oil was lifted by Congress in December 2015.  China appears to be readying its economy for sustained growth by building the infrastructure necessary to provide the ample energy supplies necessary for such growth.