China Is the Enemy and Renewables Mean Dependency On China

A great report issued last month by Power the Future highlights a huge problem for green energy schemes; they depend on China, our enemy.

Power the Future is a relatively new group that describes itself as “the voice of energy workers pushing back on radical green groups and the ideologues who fund them.” They put out a report in July that does a superb job identifying a critical issue for solar and wind energy; they essentially depend on an enemy. That enemy is China, which not only gave us the WuFlu pandemic, but has funded terrorism, employed child labor, engaged in ethnic cleansing, taken over what was free Hong Kong, is building islands in the South China Sea from which to attack its neighbors and has stolen vast amounts of our wealth by making us dependent on them for pharmaceuticals, among other commodities. Now, they want to make us energy dependent on them as well. 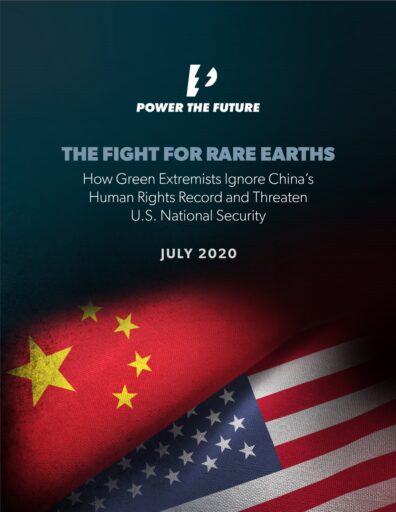 Free trade is a very good thing and agreements that permit us to sell LNG to China and China to sell us solar panels in return are very appropriate business deals, despite the adversarial positions of our two nations in the world. But, what we see with green energy schemes is something quite dangerous. This is because it would eliminate one side of the equation and make us wholly dependent on our enemy for the rare earth element (REE) resources needed to make those panels (not to mention wind turbine parts and batteries for electric vehicles). This is the threat so well laid out and fully detailed in “The Fight for Rare Earths,” the Power the Future report.

Consider, for example, the following report-highlighted statement made by Massachusetts Senator Ed Markey in 2010, before he sold out to special interests and fully aligned himself with the green devil and AOC to pander to his left-leaning Bay State voters who have lost all touch with reality and live in the dreamy world of academia where up is down, left is right and everything is inside out:

“I am troubled…that the world’s reliance on Chinese rare earth materials,” he wrote, “in combination with China’s apparent willingness to use this reliance for leverage in wider international affairs, poses a potential threat to American economic and national security interests.”

Despite Markey’s abandonment of this concern, the situation has only gotten worse over the last decade and threatens to get infinitely worse if we stake our future on solar and wind, which are not only massively subsidized, but also depend on rare earth minerals from China. Here is some of the facts from the report:

Experts have known for years that China exercises staggering leverage over the U.S. with respect to REEs and critical minerals. And just as with COVID related necessities, China is aggressively exploiting its position. “China’s rare earth producers, who control the lion’s share of the world’s output of the elements,” the South China Morning Post reported last year, “said they are ready to use their dominance of the industry as a weapon in the country’s year-long trade war with their customers in the United States.”

These threats are not new, or confined solely to the U.S. In 2010, after a Chinese fishing trawler collided with a Japanese coast guard ship near disputed islands, China dramatically reduced REE exports to Japan, forcing it to seek imports from Australia and India. Japan eventually conducted its own research and development on REEs, and by 2017, turned to Vietnam, which became the largest source of Japan’s REE imports.

Then-Secretary of State Hillary Clinton called China’s action “a wake-up call,” but “little action was taken by other countries reliant on imports to diversify their resources or develop minerals action plans of their own,” including the United States. Why does this matter? Among other things, China’s actions, enforced through quotas, licenses, and taxes, “led to record high prices for REEs,” and as a result, highlighted “the potential supply risks and supply chain vulnerability for rare earths and other raw materials and metals needed for national defense, energy technologies, and the electronics industry, among other end uses.” 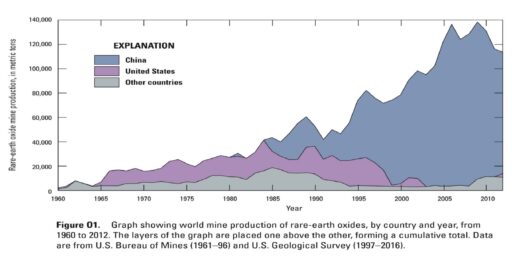 What happened? In 1992, Deng Xiaoping, China’s then-leader, said that while “the Middle East has oil, China has rare earths.” Deng and Chinese Communist officials set out to dominate REEs. They did this by “strategically flooding” the global REE market and pumping up Chinese state subsidies for favored companies. When these typical Chinese tactics were “coupled with lower labor costs and less stringent environmental standards,” the rest was history, enabling “China’s rare-earth rise.”

In 2016, as it launched its “Made in China 2025” initiative, which aims to “build strategic industries in defense, science, and technology,” China empowered its Ministry of Industry and Information Technology to produce an “action plan for its metals industry to achieve world-power status.” “By deploying state-owned enterprises and private firms to resource-rich hot spots around the globe,” according to Foreign Policy magazine, “China would develop and secure other countries’ mineral reserves—including minerals in which China already holds a dominant position.”

All over the globe, China bought mines, purchased equity stakes in mines, and forged long-term agreements to takeover mining companies’ supplies, all with the goal, since achieved, of gaining “outright control or influence over large shares of the global production of these resources.”

America’s vulnerability is not just about China’s supply of REEs; China also overwhelmingly controls the processing of certain REEs. According to the Center for Strategic and International Studies, Chinese firms “control more than 85 percent of the costly processing stage of the supply chain and produced more than 70 percent of the world’s rare earth metal supply in 2018.”

While that number is lower than the eye-popping 97 percent in 2009, it still is unacceptably high.

And keep it mind that it would take “years to build enough processing plants to match China’s processing capacity of 220,000 tonnes—which is five times the combined capacity of the rest of the world.” As Foreign Policy magazine explained, “the critical bottleneck for the United States, and especially the defense sector, isn’t access to rare earth ores…it’s that the rest of the value chain— processing those ores, refining them into metals, and turning that metal into advanced products like permanent magnets—is dominated by China.”

Get the picture? Well, there’s a lot more and I encourage everyone to read the full report, which is fully footnoted and easily digestible. It’s a truly important issue and just adds more to the heavy downside of supposedly green energy and the scams that surround it.