Climate change fever has apparently taken over on public service television in New York and facts shall not get in the way, no shall debate be permitted.

On August 26,2019 Public Broadcasting Service WCNY Syracuse NY aired the Connect New York program “Climate Change in New York, a Changing Landscape”.   I stopped listening within the first two minutes because there were three gross mis-characterizations in that time and that was too much for me to swallow.  This post documents those three mis-characterizations. 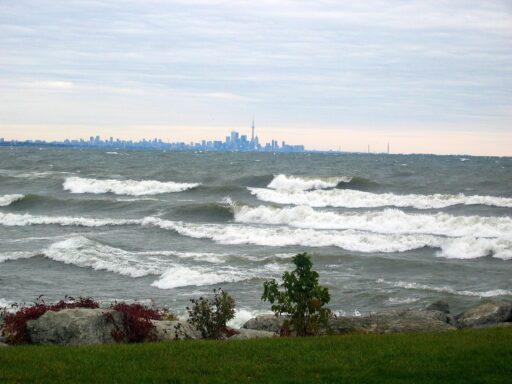 Waves of climate change hyperbole was up on Lake Ontario as Toronto skyline looms in background.

WCNY’s description of their show states:

“Summer 2019 has been an illustration of climate change in New York – from a record breaking heat wave to flooding along the shores of Lake Ontario. In July, Governor Cuomo signed one of the most aggressive climate bills in the nation. We ask climate experts if the new law will be enough when the International Panel on Climate Change has warned that the world has 11 years left to act.”

In the opening monologue of the show host Susan Arbetter said: “Summer 2019 has been a graphic illustration of climate change from a record-breaking heat wave in France to flooding along the shores of Lake Ontario.”  After introducing the panel Ms. Arbetter referced the UN Intergovernmental Panel on Climate Change asking Sandra Steingraber why we have to act quickly.  Dr. Steingraber said “Climate change now is a real emergency” and I stopped watching.

I believe that the heat wave and high water only represent extreme weather within the range of natural variability and that there is no climate emergency.   One of my pragmatic environmentalist’s principles is Alberto Brandolini’s  Baloney Asymmetry Principle: “The amount of energy necessary to refute BS is an order of magnitude bigger than to produce it.”  The explanation of the reason why Lake Ontario flooding is not an illustration of climate change exemplifies that principle.

If climate change were the cause of record Lake Ontario levels and resulting flooding then we would expect that there would be a trend of increasing lake levels.    That presumption is very easy to check. The US Army Corps of Engineers, Detroit Office provides monthly mean lake-wide average levels for all the Great Lakes.  The Great Lakes water levels 1918 to 2018 figure shows these data for all the lakes.  A quick scan does not reveal any obvious trend for Lake Ontario.  Moreover there are high lake levels in 1943, 1947, 1951, 1952, 1973, and 1974 as well has values in 2017 and the record breaking levels in 2019.

In order to determine if there is a possible trend I fit a linear regression model to determine if there was a statistically significant trend. I use Statgraphics Centurion software from StatPoint Technologies, Inc. to do my statistical analyses because it provides flexible plotting and regression tools.  Statgraphics enables the user to choose the best relationship from 27 different linear regression equations.  It is also nice because it presents clear summaries for the non-statistician like me.

I found the maximum monthly Lake Ontario water level for each year and plotted those values versus the year.  The Maximum Annual Monthly Lake Ontario Lake Levels 1950 to 2019 figure plots the water levels that have been coordinated with Canada from 1918 to 2018 and 2019 data through July that I extracted from the monthly reports.  According to the statistical program there is a statistically significant relationship at the 95% confidence level between Lake Ontario Maximum Monthly Level and Year because the P-value in the ANOVA table is less than 0.05.  I have listed the statistics and Statgraphics descriptions in Lake Ontario Annual Maximum Water Level Statistics 1950 to 2019.

At first glance host Susan Arbetter appears to be justified saying that Lake Ontario water levels are rising in response to anthropogenic climate change.  Based on their backgrounds I doubt that any members of the expert panel disagreed either.

The expert panel consisted of Rachel May, NYS Senator who was an environmental sustainability educator at SUNY ESF with no science degrees; Sandra Steingraber, a Distinguished Scholar in Residence at Ithaca College where she writes about climate change, ecology, and the links between human health and the environment;  Mark Dunlea, founder of the Green Education and Legal Fund whose web page states that he is a graduate of RPI (Management) and Albany Law School; and Yvonne Chu a member of Climate Change Awareness and Action who has a BS in Environmental Science from SUNY Plattsburgh.

However, there is an inconvenient fact.  The Intergovernmental Panel on Climate Change claims the effect of anthropogenic greenhouse gas emissions on the climate system “has a 95–100% probability of causing the currently observed and unprecedented warming of the climate since the mid-twentieth century”. As a result anthropogenic climate change could only have affected water level change after 1950.

However, as shown in Maximum Annual Monthly Lake Ontario Lake Levels 1950 to 2019, the relationship is much weaker after 1950.  According to the statistical program there is not a statistically significant relationship at the 95% confidence level between Lake Ontario Maximum Monthly Level and Year over this time period because the P-value in the ANOVA table is greater than 0.05.  I have listed the statistics in Lake Ontario Annual Maximum Water Level Statistics 1950 to 2019.

Because there is no statistically significant trend after 1950, the disastrous flooding of 2019 is more likely weather related than indicative of climate change.  I refer you to another of my pragmatic environmentalist principles the Golden Rule of Climate Extremes.  Dr. Cliff Mass christened this rule as “The more extreme a climate or weather record is, the greater the contribution of natural variability”.  I am confident that were I to do the same kind of analysis for the French heat wave this summer it would be another example of this golden rule.

If you recall, Ms. Arbetter referenced the UN Intergovernmental Panel on Climate Change asking Sandra Steingraber why we have to act quickly.  She said “Climate change now is a real emergency”.  Again I refer you to Dr. Cliff Mass who has explained that climate change is probably not an existential threat.  He believes it is a serious problem and I agree.  Note, however, over-hyping the reality could very well come back and hurt the cause.

Ms.  Arbetter summed up the Lake Ontario flooding as “pitting the status quo against science”.  I have shown that her “science” was fatally flawed.  Her expert panel only included advocates without the technical expertise to differentiate between weather and climate.  Where does that leave the viewers who watched this show?  Eventually the public will catch on that this alleged imminent, inevitable climate emergency that requires costly and sweeping changes to society is not as advertised.

I am heartened that WCNY has not joined the Columbia Journalism Review “Covering Climate Now” effort.  However, this Connect NY program was entirely consistent with the intent of that effort to strengthen the media’s focus on the climate crisis.  According to the Connect NY web page the program offers “insightful discussion, information, and analysis on timely topics that affect residents across the Empire State”.  However, it seems to me the program was not an honest attempt to present both sides of this topic but rather a platform to present opinions of one side of this issue.

Update: I sent a letter to the station with these explanations.  I received the following response on September 5, 2019:

I appreciate your email.  The climate program that aired on WCNY in August was the second “Connect: NY” program we have produced on the issue.  The first program aired on February 25th and featured the climate debate from the business perspective.   If you watch both of them, I think you’ll have a fuller appreciation of the range of perspectives we have featured on the air on this issue.

Thank you again for engaging.

Editor’s Note: Isn’t it nice to know how self-assured our press is? The short condescending reply from Susan Arbetter, who should know better, says it all. This climate change hyperbole is now so completely over the top it is impossible to have a rational discussion involving it with those of a different view.