[Editor’s Note: Climate justice is no real thing; it’s but yet still another con designed to feed the needs of ravenous special interests from the swamp.]

The presidential and VP debates were hard to watch to put it politely. But then again, politics can be ugly.

Among their many statements, former Vice President Joe Biden and VP candidate Kamala Harris both promised to rescue us with multi-trillion-dollar climate justice policies.  While novel sounding, it’s just a sad rerun of the failed promises made the last time Biden was in office. Back then, a key component of the Obama-Biden $857 billion 2009 Stimulus Plan was to create five million new green jobs.

Guess what?  The inspector general at the Department of Labor, as well as the analysts at the Bureau of Labor Statistics, evaluated both the stimulus plan’s job-training programs and the number of green jobs “created.” The programs were a dismal failure and the number of green jobs created was nowhere near the target. It turns out, these evaluations were so damning that further reports were canceled under the guise of balancing the budget. 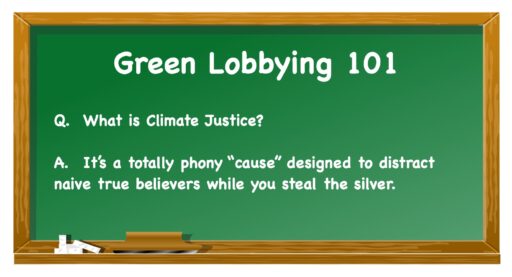 And that’s merely a glimpse of how lobbyists and special interests in Washington DC not only get rich, but richer.

Since 1970, the inflation-adjusted federal budget has grown by more than two-and-one-half times.  Along with that rise, the Washington, DC area has gotten much richer.  In 1970, three of the wealthiest counties in the country were suburbs of DC.  By 2019, the share grew to eight of twenty (nine if you count the independent city of Falls Church).  Over that same period, the entire Midwest went from six of the top 20 counties to zero.  No politician ever authored legislation whose title was “A Bill to Transfer Great Gobs of Money from the Heartland to the Capital.”  It is not a coincidence it worked out that way, that government expenditures and Washington’s wealth ballooned in unison.

The big winners are the people who run the programs (and their consultants).  The wealthiest-county data are backed up by numbers on housing values.  From 1970 to 2018, the inflation-adjusted value the median house in the U.S. rose by slightly more than 100 percent.  Over that same stretch, the inflation-adjusted value of the median home in DC rose by more than 350 percent to $607,000.

Biden’s plan is to spend $2 trillion on his green-jobs plan.  There are 6.5 million families in poverty in the U.S.  If this spending were targeted at the poor, each of these families could receive more than $300,000.  They will not receive any significant portion of that amount.  That is not the way DC works.

One more factoid for those who doubt big spenders aren’t really focused on the poor.  Twenty-six of the top 27 richest congressional districts are represented by Democrats.

If ever-larger government programs are not the recipe for creating jobs, what is?  Cutting taxes, reducing unnecessary red tape, and unleashing bountiful, affordable energy seem to work pretty well.  Before the worldwide COVID19 pandemic cut the legs out from under the world economy, the U.S. employment picture was excellent.  The labor-force participation rate was growing, unemployment rates were falling to record low-levels for Hispanic and African-American workers.  Wages were rising and, for once, they were rising even faster for low-wage workers. And it sure wasn’t higher taxes and more regulation making this happen.

A multi-trillion-dollar green-jobs plan will tax productive economic activity and reward beggar-thy-neighbor political activity.  Experience shows this enriches political cronies, but does not create good jobs.  A better strategy is to make investment pay by reining in bloated government and saying “no” to the swamp creatures.  Because when investment pays, investors pay workers.

History offers little encouragement that Biden’s new green-jobs plan will be much different than it was in 2009.  Regardless of how high-minded and noble-sounding may be the calls for legislation and justice, after the placard-carrying demonstrators leave Washington DC, the details are hammered out by the insiders – lobbyists and special interests.  Of course, the middleman takes his cut, too.

And that’s how lobbyists, instead of the poor, will benefit under Biden’s climate justice plan.

Editor’s Note: If there were really such a thing as climate justice it would a movement to ensure the poor and moderate income weren’t taxed to pay for green special interest schemes and that they had access to clean, inexpensive energy such as natural gas. It would also strike a blow for natural gas development in rural areas where it has revived economies while being opposed by wealthy elites who don’t want it in their back yards,