Well, the Constitution Pipeline is apparently dead for now, thanks to special interests and a mad corrupt governor who hates Upstate New York with a passion.

Last week we told you the good news that Williams recently re-filed an application with the New Jersey Dept. of Environmental Protection to build one of two critical northeastern pipeline projects–called the Northeast Supply Enhancement (NESE) project. Today we bring you the sad news that Williams has given up on building a second, long-delayed project to flow natural gas from northeastern Pennsylvania into central New York, called the Constitution Pipeline. 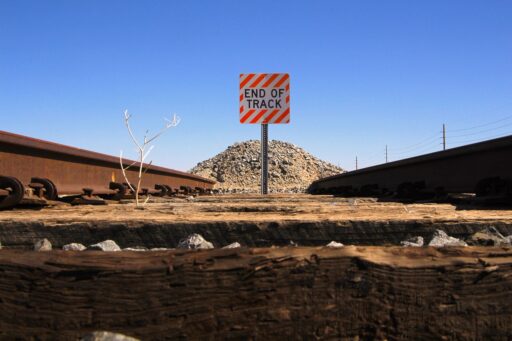 It’s the end of the track for Upstate’s future.

On Friday, MDN told you that as part of its fourth-quarter/full-year 2019 update, Williams was “writing down” (impairment) $354 million of value for the Constitution Pipeline. We asked at the time if this was a potential indicator that they were throwing in the towel on this project. After all, it doesn’t take a rocket scientist to figure out if they’re writing off the value for most of the project, it’s a pretty sure bet it won’t get built. Indeed, that’s just what Williams confirmed, on Friday:

From the Oneonta Daily Star (our buddy Tom Shepstone is quoted, emphasis added):

Williams Companies, the Oklahoma energy giant, confirmed Friday that it has shelved the Constitution Pipeline, a proposed interstate natural gas pipeline that triggered a prolonged battle between environmental activists and pro-development advocates.

“Williams — with support from its partners, Duke, Cabot and AltaGas — has halted investment in the proposed Constitution project,” the company said in response to questions from CNHI.

“While Constitution did receive positive outcomes in recent court proceedings and permit applications, the underlying risk adjusted return for this greenfield pipeline project has diminished in such a way that further development is no longer supported,” Williams added.

Williams disclosed this week in a financial report that the investors in the Constitution Pipeline took a $345 million “impairment,” suggesting that the investment in the mammoth 124-mile pipeline was being written off…

Constitution’s footprint would have crossed hundreds of real estate parcels in Chenango, Delaware and Schoharie counties. Garti said Stop the Pipeline’s next mission is to ensure easements acquired by Constitution are removed from landowners’ deeds…

The pipeline was designed to move 650,000 dekatherms of natural gas per day. Just last September, Williams voiced optimism about the project, saying then Constitution “continues to represent much-needed energy infrastructure designed to bring natural gas to a region of the country confronting natural gas supply constraints.”

Earthjustice, a nonprofit environmental group that opposed Constitution, argued the project would have increased demand for fracked gas while causing pollution and posing threats to wildlife and human health.

Moneen Nasmith, an Earthjustice lawyer, said Catskill Mountainkeeper, Riverkeeper and the Sierra Club were among the clients that objected to the pipeline.

“At this critical moment for our climate, we cannot afford unnecessary fossil fuel projects that will lead to more fracking and exacerbate our climate crisis,” Nasmith said.

Several pro-fracking landowner groups and trade unions came out in support of the project at a series of public forums, billing it as beneficial to the upstate economy. Tom Shepstone, who runs the pro-fracking blog Natural Gas Now from Pennsylvania, said the Constitution project suffered from a series of regulator delays he attributed to opposition from the Cuomo administration.

“This reflects the total disregard the Cuomo administration has for upstate New York,” Shepstone said. “This dream of powering everything with renewables is ludicrous.”

Cuomo is seeking to get legislative approval to speed up the process of siting of renewable energy projects to help the state reach the goal of having 70 percent of its electricity from green sources by 2030.

The Cuomo legislation would establish the Office of Renewable Energy Permitting to ensure decisions relating to wind and solar projects are “predictable” and “responsible,” the governor said in an announcement.

From the Binghamton Press & Sun-Bulletin:

“Williams — with support from its partners, Duke, Cabot and AltaGas — has halted investment in the proposed Constitution project,” the Tulsa-based company said in a statement.

“While Constitution did receive positive outcomes in recent court proceedings and permit applications, the underlying risk adjusted return for this greenfield pipeline project has diminished in such a way that further development is no longer supported.”

The project took a step forward last August when the Federal Energy Regulatory Commission found the state Department of Environmental Conservation erred in rejecting a critical water-quality permit for the pipeline.

But the DEC and Gov. Andrew Cuomo vowed to continue to fight the project, part of a long-standing effort by the Democratic governor to cut New York’s fossil-fuel emissions.

New York has a ban on hydraulic fracturing for natural gas and a goal of of net-zero emissions by 2050.

“Any way that we can challenge it, we will,” Cuomo said after the FERC decision…

The state’s fight against new gas pipelines has strained its energy resources, leading to a natural gas shortage, some utility companies have said.

Under pressure from Cuomo and state regulators, National Grid reached a deal with the state to end its moratorium on Long Island last November.

But the Con Ed moratorium has persisted in southern Westchester for nearly a year.

“We are going to be going through the same process,” Cuomo said in November about ending the Con Ed fight. “We are fine with legitimate discussion, but we are not going to be bullied.”

Isn’t that rich? Cuomo is the master bully. He bullied National Grid into hooking up new customers for natural gas on Long Island, even though the company will, in a few years, run out of gas! The National Grid coming shortage is a crisis in the making. What a putz.

At any rate, we mourn the loss of the Constitution project. Cabot Oil & Gas stood to gain the most. They’ll adapt and be fine. It is New Yorkers and New Englanders who are the biggest losers with the loss of this project. Yet one more evidence for why New York leads the nation in the numbers of people moving out of the state year after year.

Editor’s Note: It’s so sad to see Williams give up on this project when it was on the cusp of complete legal victory. The fractivist wacko comment about persistence (funded by the super-wealthy NRDC gang and friendly special interests) was, of course, on the money. They had more of it in this case and, while the Williams decision may well have made financial sense in the short-term, I fear the company and the mid-stream industry will come to regret it as the act that encouraged other governors in other states to follow his path. That’s precisely what happened when the gas industry (and others) failed to challenge New York’s fracking ban in Federal court. That’s where the battle should have been fought then and it’s where it should be fought now.

Notwithstanding my view, it is interesting that the special interest shills leading the anti-pipeline campaign, on the bizarre theory that CO2 lowering gas is a climate threat, aren’t quite sure it’s over. They want to get rid of the easements, too, which means they understand someone else, or even Williams, could pick up the project again someday when New York is starving for gas. Readers will recall Kinder-Morgan once had plans for a parallel pipeline so anything is possible down the road.

But, what is most interesting is that Governor Corruptocrat proposes to create an Office of Renewable Energy Permitting “to ensure decisions relating to wind and solar projects are “predictable” and “responsible,” That means he intends to shove them down the throats of any Upstate communities that resist these ratepayer/taxpayer ripoffs in the name of a climate that’s really a special interest pocketbook. As we’ve seen time and again, that’s not going to go down well. Even Manhattanites hate it when it threatens their second-home retreats. Cuomo can empty Upstate of folks trying to make a living but he’ll still face opposition from the sort of people who killed Tony Ingraffea’s pet wind project. I know, because I’ve faced them in public meetings. Ultimately, and for this reason, solar and wind are never going to replace natural gas and there will be a pipeline—someday.