COVID Claptrap: Sorry, But, No, We’re NOT All in This Together

Lots of well-meaning folks responding to the COVID-19 situation are fond of saying “we’re all in this together” but, sadly, that’s anything but true.

It’s easy to say the COVID-19 virus or, as I refer to it, the WuFlu, has wrecked havoc on our economy and, quite literally, our lives and that “we’re all in this together.” But, that’s not true, if we’re honest with each other. First, it’s not so much the virus but the response of our ruling elites that’s wrecked most of the havoc. We didn’t react this way during the Hong Kong Flu that killed more than 100,000 of us during the year of Woodstock. Secondly, the disparity with which different segments of our society are treated tells some folks, primarily the same ruling elites who are wrecking the havoc, are not even in it at all, let alone together with us. 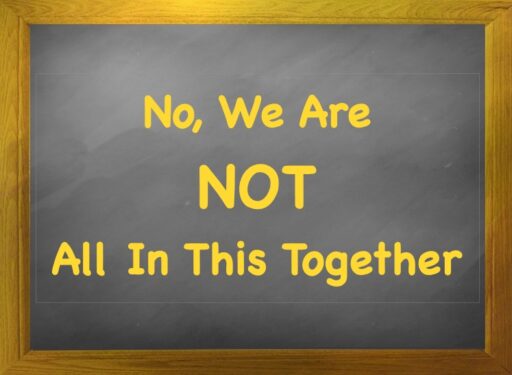 The COVID crisis is now largely a con. It didn’t start out that way, but it is now 100% political. We have moved, almost seamlessly, from “flatten the curve” to avoid overwhelming our hospitals all at once, to flatten all life so we can start all over again with supposed experts  looking out for our safety. It is profoundly tyrannical and, frankly, puke-worthy. Why are we doing anything beyond protecting nursing homes now that we know the curve was never much of the threat and the models were all hopelessly and recklessly wrong? Well, because it’s to the benefit of a whole lot of special interests. Consider the following:

There is no “all together,” at all, in fact. This is no 9-11 when the entire country was affected. It’s not a long dry spell or a blizzard. It’s a man-made picking of winners and losers based on models and theories that are cheap crap and only serve to enable authoritarian addiction. COID itself may theoretically strike anyone, although even that is less than fully true, but it isn’t the virus that is our problem. We’re going to lose 100,000 or so lives if we assume the numbers are valid (they appear to be way above the actual) and each death is tragedy but they are not unusual. We’ve had several flu outbreaks that did the same and we did nothing but shut down nursing homes, What’s different now? It is the times and precisely the fact we are not all in this together.