COVID Hysteria Is the Disease and It Comes from Dirty Politics

COVID hysteria, the second round at least, is a political disease and it’s being fueled by a compromised media and unethical politicians looking for an edge.

It’s frightening how many ordinary people are being sucked into the whirlwind of COVID hysteria. We see it every hour of every day now as a biased media hoping to score points for their favorite pols and against those they hate hype the data on news cases, while ignoring the reality of the deaths and who is most responsible for them.

Yesterday, on Facebook, I happened to see a commenter extolling the Governor of Pennsylvania and trashing the Governor of Florida because the cases have risen recently in the latter. It was as if Florida was the epitome of recklessness and danger and Pennsylvania was a model of reason. Really? Florida has a population of 21,477,000 and has had 3,731 deaths to date or 17 per 100,000 people. Pennsylvania has a population of 12,801,000 and has had 6,753 deaths or 53 per 100,000 people. Pennsylvania’s death rate across the entire population is over three times that of Florida. 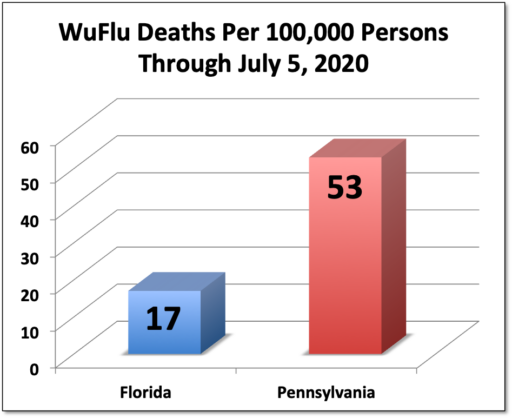 Florida’s is also testing at more twice the rate of Pennsylvania. It’s testing 212 people per 100,000 versus 77 per 100,000 persons, so it’s obviously picking up more cases as a result. But, the mortality rate for those tested positive is only 1.9% in Florida and it is 7.2% in Pennsylvania. If you get COVID in the Keystone State, in other words, you are 3.8 times as likely to die. 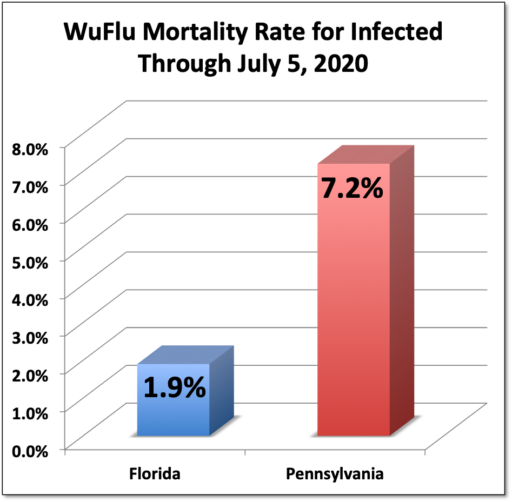 Yes, Florida has had more cases and a higher rate of positives, but so what if your chances of dying from it are roughly one-fourth what they are in Pennsylvania? The idea was to “flatten the curve,” not eliminate it and if younger people are getting it and survive with few symptoms and contribute to community immunity, isn’t that good thing? Of course it is, although there will always be tragic exceptions. That’s the case with the flu, too, but we don’t go into COVID hysteria over the flu; just the WuFlu.

The real danger exists among those who reside in nursing and personal care homes. And, once again, we see why Florida excels compared to Pennsylvania. Floridas has had 1,884 deaths in such facilities or 43 per 100,000 persons of aged 65 year or more. Pennsylvania has had 197 per 100,000 persons of aged 65 year or more. If you’re comparing, that suggests you are, if you’re 65+ like me, and your risks from COVID are 4.7 times greater in Pennsylvania than the Sunshine State. More than two-thirds of Pennsylvania COVID deaths have been in long-term care facilities, in fact, and this accounts for our high death numbers. 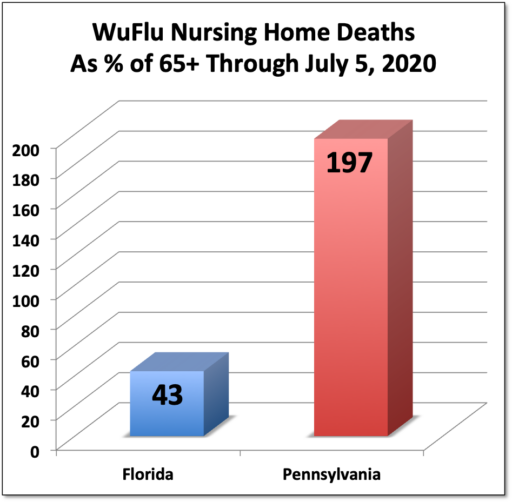 The reason, of course, is simple. Pennsylvania Governor Tom Wolf followed the example set by his apparent mentor, Andrew Cuomo, who steered the Empire State into 32,206 deaths to date and an 8.1% mortality rate by insanely pushing COVID patients into nursing homes when he had plenty of hospital beds supplied by the Federal government. Meanwhile, Florida’s Governor Ron DeSantis immediately focused on protecting the most vulnerable; the state’s long-term care residents. Notwithstanding COVID hysteria in the media and among self-serving politicians such as Cuomo, the Florida response has been far superior to Pennsylvania’s, New York’s or New Jersey’s. The Texas and Arizona numbers are also far superior to Pennsylvania; the entire media narrative being

How long will the COVID hysteria continue? As long as the media and politicians arming themselves with it continue to benefit. Sadly, that’s a simple fact. The only cure for this disease is to spread the facts, which is the point of this post.