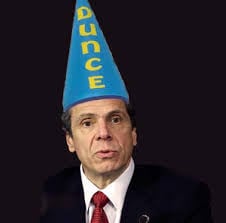 Cuomo has no one to blame but himself for this turn of events. He forced the NY Dept. of Environmental Conservation to refuse to issue a “401 certificate” under the federal Clean Water Act (CWA) to allow the Constitution Pipeline and Northern Access Pipeline projects to cross streams in the state (see NY Gov. Cuomo Refuses to Grant Permits for Constitution Pipeline). It was a purely political move–there is no scientific/environmental reason for refusing either project.

The CWA allows states to “weigh in” with their concerns over infrastructure projects like pipelines, allowing them to have a say in the route of the pipeline, requiring certain conditions be met, etc. What the CWA does not do is allow states to reject projects out-of-hand for political reasons. These projects are federally permitted (by the Federal Energy Regulatory Commission), specifically to avoid one state from blocking projects that can benefit other states. The CWA 401 statute is meant to give states a say, but not allow states to resort to NIMBYism. Yet that’s what New York and Cuomo have done. They intentionally pushed the 401 statute to an extreme, bending it and using it in ways never intended.

So now, via EO, Trump is asking the EPA to tweak and rewrite the 401 statute to close loopholes people like Cuomo in NY (and kooky Gov. Jay Inslee from Washington State) are abusing. It is a matter of justice, to repair what the abusers have twisted and mangled.

The man-child is threatened by Trump’s action:

New York will sue the Trump administration over an executive order issued earlier this month intended to facilitate the construction of pipelines and other projects involving oil and natural gas while reducing the regulatory authority of states to prevent them, Gov. Andrew Cuomo said Tuesday.

Cuomo said during a radio interview that the state will front a legal challenge against the order, which he said has the potential to allow pipelines in New York that the state would not support.

“If a pipeline cracks in our state, it’s our state that gets hurt,” Cuomo said. “He wants to use, basically, federal supremacy — he can seek and do it by executive order — to allow pipelines across our state. We disagree legally and we will sue him.”

An inquiry on the litigation sent to the White House Tuesday afternoon was not immediately returned. The state attorney general’s office, which would bring the litigation, also did not respond to a request for comment.

It’s another instance of Cuomo vowing to bring litigation from the state against the Trump administration, which has already been the subject of hundreds of legal actions from New York. The state, most recently, announced a lawsuit against the U.S. Environmental Protection Agency over a decision to allow an indefinite break from the cleanup of the Hudson River.

The lawsuit Cuomo referred to on Tuesday, which hasn’t been filed as of yet, is along the same lines. Cuomo said the order from Trump was targeted at states such as New York that have been less willing than others to approve new pipelines within the state’s borders. That’s prevented, in some cases, entire pipelines from being completed.

Trump cited decisions from New York, specifically, when he announced the executive order earlier this month. He referred to the Constitution Pipeline, a project the Cuomo administration decided to block, as an example of why the order was promulgated.

“In New York, they’re paying tremendous amounts of money more for energy to heat their homes because New York State blocked a permit to build the Constitution Pipeline,” Trump said. “New York is hurting the country because they’re not allowing us to get those pipelines through, and that’s why they’re paying so much for their heating and all of the things that energy and our energy produces. So, hopefully, they can come on board and get in line with what’s happening.”

New York has decided not to “come on board” with the order, according to Cuomo, a fervent critic of the president. He said New York will oppose any action from the Trump administration to impose energy production and distribution methods that are currently not in favor with state and local officials, like oil drilling off the coast of Long Island, for example.

“I will fight him every step of the way. President Trump, his position is clear: fossil fuels are great, oil exploration is great,” Cuomo said. “I banned fracking, he thinks fracking is great, and now he has this geographic mass in the middle of his map called the state of New York and we’re a burden for him because we don’t want pipelines crisscrossing the state.”

Cuomo had already expressed opposition to Trump’s executive order when it was signed earlier this month, but didn’t threaten legal action at the time. He called it a “gross overreach of federal authority” and argued that states should be able to assess, as they do now, the environmental and public health risks of projects before they’re approved.

The executive order has the potential to limit that authority, according to the document signed by Trump earlier this month. A provision of the order directs the EPA to review a section of the federal Clean Water Act and amend regulations that allow states to refer to that law while blocking proposed pipelines and other projects.

States would no longer be able to use the CWA to reject plans for such a project, which is what happened with the Constitution Pipeline. The Cuomo administration rejected water quality permits for the pipeline in 2016. The structure would have stretched from Pennsylvania and across parts of the Southern Tier and Central New York.

New York will be the first state to sue the Trump administration over the executive order.

The Trump administration is, meanwhile, embroiled in separate litigation over its decision to issue a new permit allowing the controversial Keystone XL Pipeline. The pipeline was rejected by the Obama administration in 2015, but that decision was reversed last month.

A coalition of environmental groups is challenging the administration’s decision in federal court in Montana, where part of the pipeline would be built. The litigation is ongoing. (1)

Andrew Cuomo is an unusually good demagogue within New York, where city voters dominate and much of the electorate supposes electricity comes from an imaginary sun god. He’ll never make it outside of the Empire State, though. His brand of politics depends on a frightening ability to sell stupidity. His recent remarks about suing the Trump Administration over its executive order regarding water quality certification for pipelines demonstrate just how little this guy has to offer.

According to an article in the New York Law Journal, “Cuomo Says New York to Sue Trump Administration Over Executive Order to Facilitate Pipeline Building.” That much is hardly surprising; it would only be a surprise if Andrew Cuomo didn’t sue. Rather, what stands out in this excellent article are the incredibly shallow and, frankly, pathertic, arguments made by this man-child New Yorkers have chosen as their governor three times. Consider this, for example:

“If a pipeline cracks in our state, it’s our state that gets hurt,” Cuomo said. “He wants to use, basically, federal supremacy — he can seek and do it by executive order — to allow pipelines across our state.”

It isn’t Trump, of course, who is allowing pipelines to cross New York. That’s Federal law and it’s necessary for transportation of fuel by pipeline. Imagine what it be like if states were simply able to stop pipelines at the border. Suppose it was 1949 again, before the Transcontinental Pipeline that later brought natural gas from the Gulf Coast to New Jersey and New York was built. Suppose Pennsylvania and Delaware had been able to say “no.”

We can be sure Andrew Cuomo would have had a quite different opinion had he been governor then, can’t we? But, he wants to deny gas to New England today. It’s why we have a Federal law and his position today is an unsustainable one, although hardly matters in his Machiavellian world of thought.

His “pipeline cracks” remark also reminds us how little this man knows beyond politics. It hearkens back to his comment five years or so ago when he worried about children falling down into gas wells. Interstate pipeline safety is a FERC matter, not a state one and that we’re supposed to be talking about water quality.

“I will fight him every step of the way. President Trump, his position is clear: fossil fuels are great, oil exploration is great,” Cuomo said. “I banned fracking, he thinks fracking is great, and now he has this geographic mass in the middle of his map called the state of New York and we’re a burden for him because we don’t want pipelines crisscrossing the state.”

New York doesn’t want pipelines? Then why is New York State using so much gas? Here are the stats from the Energy Information Administration: Look closely. Andrew Cuomo’s state used 1.26 quadrillion cubic feet of gas in 2017. That makes it the sixth largest consumer of natural gas in the country. It was No. 4 up through 2015, but the shale revolution took Pennsylvania somewhat higher the next year. Florida, where a huge share of New Yorkers have gone to escape Empire State also rose higher. Still, New York remains a humongous gas user doesn’t it?

Yet, Andrew Cuomo says “we don’t want pipelines crisscrossing the state.” Think about that and what a pathetic excuse it offers for the lawsuit Cuomo says he’ll pursue. No one can possibly take it seriously…except that too many New Yorkers will. Why? Because they apparently suppose their heat magically comes from an imaginary sun god, summoned by turning a thermostat. Only in New York! No one else would ever fall for such nonsense. (2)