Andrew Cuomo, since becoming governor, has repeatedly stuck it to New York electric ratepayers and now he’s embarking on yet another windy boondoggle.

Cuomo today announced the state had selected two companies to build a total of 1,696 MW of wind turbines off New York City and Long Island, which will likely equate to at least 200 turbines. He didn’t mention the cost, but said New Yorkers will have to shell out $307 million for the training and land-based facilities alone. 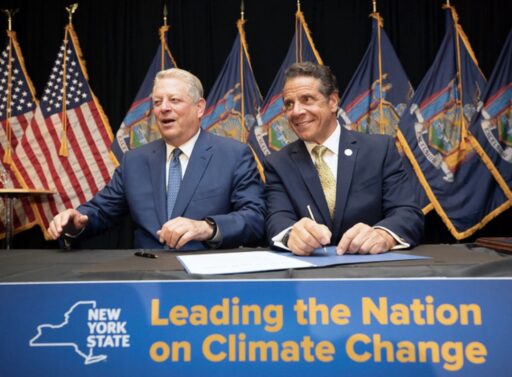 The governor made the announcement while also signing the Climate Leadership and Community Protection Act (CLCP), a far-reaching law that will allow New York State to regulate every source of greenhouse gas emissions with the goal of cutting them by about one-third by 2030, and roughly 84 percent by 2050. CLCP also requires the state to get 70 percent of its electricity from renewable sources by 2030.

“A complicating factor,” the governor said, “is that these pressing issues must be addressed at a time in which emotion and partisanship rule this nation over logic and fact.”

But Cuomo is needlessly complicating the state’s efforts to hit those emission targets by himself sidelining logic and fact as the state formulates its policies.

First, offshore wind is the most expensive renewable energy source available to New York, and CLCP obligates the state to subsidize a large and arbitrary amount—9,000 MW—of offshore wind. Cuomo has joined the ranks of politicians who fetishize offshore wind-generated power it independent of the economics, presumably because of its popularity in Europe.

Besides being more expensive, offshore wind requires more backup than the existing energy mix that comes mainly from nuclear and fossil-fuel plants, since a turbine can’t be counted on to be operating at a particular time. That means ratepayers would also be tapped to fund the development of new energy storage facilities, or that downstate will become even more dependent on its remaining fossil-fuel plants after the turbines come online.

Cuomo didn’t say how big the offshore wind subsidies will be, but experiences here and elsewhere indicate they’ll be considerable. These subsidies will be collected from ratepayers on a statewide basis by forcing utilities and large electric customers to pay into a credit system, and more than half the funds will come from people who live north of New York City.

Assuming New York paid the same subsidy as Maryland officials plan for their offshore wind project (essentially guaranteeing a payment of $131.93 per megawatt-hour), and based on last year’s average wholesale costs of electricity in New York City ($41.16) and Long Island ($45.05), the projects will get an annual subsidy of about $528 million.

But there’s reason to believe the subsidy will have to be considerably higher: Cuomo also announced the projects “will have a union project labor agreement before they commence.”

Translation: the state will force contractors to hire union construction workers, who make up a shrinking minority of the state’s construction workforce, and to comply with union contracts. It will significantly—and needlessly—increase the cost, and undermines the governor’s claim that “the environment and climate change are the most critically important policy priorities we face.”

Cuomo’s offshore wind push comes when the state, for starters, has been failing to hit its own renewable energy targets. After almost 15 years of subsidies, New York managed to get less energy from renewables in 2018 than it did the year before. And that’s happened because the governor has needlessly complicated the processes.

The Cuomo administration in 2016 deliberately excluded hydroelectric power from competing for the newest batch of state renewable subsidies, ostensibly because new dams generate methane when areas are flooded. (This marked the continuation of an equally indefensible Pataki-era policy that shielded smaller, home-grown renewable projects from foreign competition.)

In reality, it’s harder to get activists excited about power lines coming down from Canada than about 3D videos of magnificent offshore wind turbines (just like the ones in Europe!), so New York has needlessly cut itself off from using more imported hydroelectric to hit its renewable targets.

All of this is happening, meanwhile, as neighboring Massachusetts is using Canadian hydroelectric power to hit its own renewable targets at a considerably smaller cost. And New York City Mayor Bill de Blasio has looked at hydroelectric power as a way to help the city get more energy from carbon-free sources.

It would make more sense for the state to immediately let hydroelectric generators qualify for subsidies, to look at ways to facilitate more transmission from renewables in Canada and upstate, and to roll back the portions of CLCP that prescribe specific energy sources. But that wouldn’t make for nearly as much excitement—or as much work for the governor’s supporters in the building trades.

Cuomo’s energy policies will still be seriously expensive, but they shouldn’t be needlessly expensive. They certainly haven’t been seriously formulated.

Originally posted at NYTorch.com and reposted here, with permission, from Empire Center for Public Policy, Inc.