Dark Waters Is A Reminder of the Dark Side of Fractivism

I happened onto a Netflix movie the other night starring and produced by Mark Ruffalo. It was called Dark Waters. Guess what it was about? Well, Ruffalo plays a lawyer for a farmer going after the Dupont chemical folks for damage caused by PFOA or perfluorooctanoic acid, used to manufacture Teflon. The storyline is an old and repeated one as predictable as a Lifetime movie, but I noticed some fascinating parallels with real life in reverse as it relates to the fracking wars in New York State. Dark Waters, in fact, seems like a retelling of the story with roles invereted. 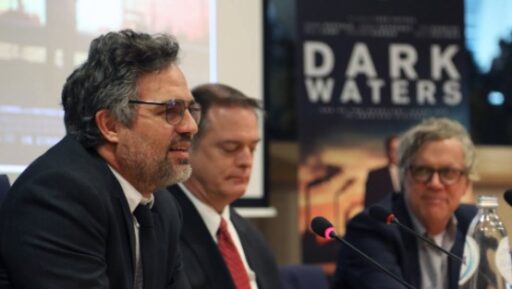 Ruffalo’s Dark Waters portrayal of Attorney Robert Bilott reminded me of David Slottje the activist Ithaca lawyer who ran around the Southern Tier opposing gas drilling. I often ran into him at town meetings and I remember, in particular, how he got tripped up by Bryant LaTourette at a town board meeting. It was in Smithville, New York, as I recall, in about 2011 or so.

Mr. Slottje stood up and testified to the town board that poor New York farmers were taking money from Pennsylvanian gas drillers to dump flowback on their cornfields – a crime. He stated he happened by a farm Upstate where he witnessed this take place. Bryant waited until Slottje was done telling this tall tale to the town board and, like a highly skilled defense lawyer, tore apart the former’s testimony with questions.

LaTourette: Mr. Slottje, what do you do for a living? You’re a lawyer, right?

LaTourette: And, you happened onto this illegal dumping of fracking flowback on a New York farm, right?

LaTourette: Did you call the police?

LaTourette: So, you want these people to believe a lawyer, an officer of the court, fighting fracking in New York happened upon an illegal dumping by the industry on a New York farm field and wasted the opportunity for law enforcement intervention that would have supported his cause?

It was at this point Slottje went silent, not answering anymore questions. I was there and I witnessed this first hand.

I suspect the character played by Ruffalo in Dark Waters was a reflection of how he sees David Slottje in his mind, but he has it backwards. Slottje was representing the elite position taken by his funder, the Park Foundation, against the interests of farmers needing natural gas development to survive.

There were also scenes and characters that appeared to be modeled after Ray Kemble and Anthony Ingraffea (in a female casting in Tony’s case) who endede being very poor witnesses very poor witnesses in a drama in the mold of the Dimock case, which ultimately amounted to very little with both DEP and EPA testing showing the wild accusations of fractivists were just that.

All I can say is this; if you have Netflix watch Dark Waters and, if you have been in the fight as long as I have, you will see that Mark Ruffalo’s Dark Waters, may well be based on reality but the characterizations involved certainly seem to based on Dimock. once again proving to me that Hollywood activists such as Ruffalo find their reality in the script, not life. I think, in fact, Ruffalo subconsciously made the bad guys of Dimock his models for the good guys in Dark Waters.