David Ismay, the Massachusetts “climate czar” working to “break the will” of seniors for climate politics is another gentry class shill.

David Ismay is a Navy Academy graduate and was a SEAL Platoon Commander, so I thank him heartily for his service to our nation. That doesn’t mean he should be exempted from criticism, though, and I have quite a bit of it. Somewhere along the line he transitioned into a an environmental extremist and high priest in the Church of Global Warming Theology. He got a law degree from Berkeley, clerked for a Ninth Circuit Court of Appeals judge and joined up with the Conservation Law Foundation—a gentry class shill group if there ever was one—to fight natural gas and other fossil fuels as if they were the Martian fighting machines from War of the Worlds. And, he just said “60% of our emissions that need to be reduced come from you, the person on your street, the  senior on fixed-income…We have to break your will.”

That’s totalitarian talk David Ismay didn’t expect to go beyond the confines of the similarly minded group he was addressing. Indeed, he moaned ” I can’t even say that publicly,” revealing his interior agenda as a tool of the American oligarchy embedded in the administration of Massachusetts RINO Republican Governor Charlie Baker. Baker, of course, hired David Ismay after the latter successfully sued him on behalf of the Conservation Law Foundation (CLF). Such is the way of the Northeast Stupid Party. 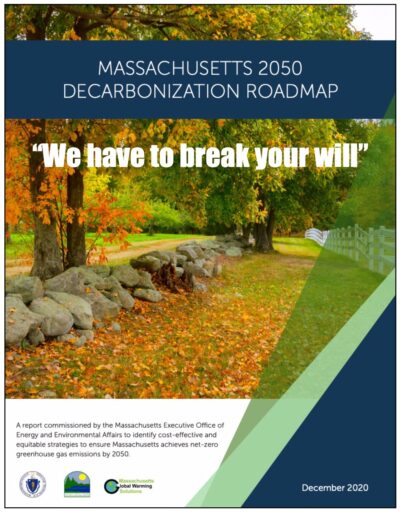 Who is the CLF? Well, the Energy Foundation, which has served as a pass-through entity for big-time hedge-funder Nathaniel Simons and his wife Laura (the infamous Sea Change Foundation), gave it nearly $3.3 million from 2008-18. Simons is the co-founder of Prelude Ventures, a green eggs and scam venture capital firm that has scarfed up mega-bucks in government rent from the Federal government. Ismay’s former employer has also gotten money from the Rockefeller family and other usual gentry class suspects. CLF President Brad Campbell is a solar energy legal expert and trial lawyer and he also was a co-founder of Swan Creek Energy, LLC that supposedly “went on to develop several of the largest net-metered commercial solar projects in the United States.” He was, too, part of the La Jolla Junta war council.

David Ismay, before moving over to become the Bay State’s climate czar, was, in other words, part of a campaign to destroy oil and gas and replace it with green energy rent-seeking schemes. Here is what he was doing in 2016 (emphasis added):

The unanimous decision from the Supreme Judicial Court was cheered by environmental groups, which dubbed the proposed tariffs a “pipeline tax.” It was a setback, however, for Republican Gov. Charlie Baker’s administration, which had viewed the financing mechanism as a means of increasing natural gas capacity and stabilizing electricity prices. Natural gas is the state’s leading source of energy for generating electricity…

The Conservation Law Foundation filed suit against the tariffs, arguing they ran afoul of a 1997 state law that restructured the electricity market in Massachusetts to separate companies that generate electricity from those that distribute it to consumers.

“Today our highest court affirmed Massachusetts’ commitment to an open energy future by rejecting the Baker Administration’s attempt to subsidize to the dying fossil fuel industry,” said Ismay, in a statement.

A little over three years later, Baker appointed this same David Ismay as his Undersecretary – Climate Change. If you wondered what was wrong with Massachusetts, this is it – sheer stupidity and political correctness so bad its governors roll over to appoint their enemies as their representatives. And, if you are so naive as to imagine Baker will, in fact, fire an enemy plant determined to break the will of Bay State seniors as a matter of religious fervor, well, you, too, are part of the problem.

What was Baker thinking? He wasn’t. Consider what David Ismay was saying about ISO New England in regard to off-shore wind boondoggles just eight months before the governor surrendered and appointed the former as his climate czar:

“Whether it’s intentional or not, ISO New England is running a system and maintaining a system that is designed for fossil fuel generators,” said David Ismay, an attorney at the Conservation Law Foundation. “To date, it has acted as if it sees renewables and other clean technologies as a threat to that system.”

Even more evidence of the  real David Ismay, in fact, had been revealed a year earlier, though when The Boston Globe editorialized again the environmental intransigence that led to dependence that winter on Russian LNG:

In 2015, the Conservation Law Foundation, a prominent environmental advocacy group in Boston, released a report dismissing the need for new pipeline capacity in New England, and called on the region to rely on a “winter-only LNG ‘pipeline,’ ” including imported gas, to meet its winter energy needs instead.

After the first shipload of Russian gas arrived, David Ismay, a lawyer with the group, stood by the recommendation and shrugged off the purchase of Russian gas from the Arctic as simply the nature of buying on the worldwide market. “I think it’s important to understand that LNG is a globally traded commodity,” he said in an interview with the Globe.

The foundation, he said, hadn’t compared the overall greenhouse gas emissions from LNG to pipeline gas from the Marcellus to determine which was worse for the climate, nor had it factored the impact on the Arctic of gas production into its policy recommendations.

But a state policy that doesn’t ask any questions about its fuel until the day the tanker floats into the Harbor abdicates the state’s responsibility to own up to all consequences of its energy use — and mitigate the ones that it can.

As surprising as that tiny bit of reasonableness on the part of the Globe was, it was topped by the bewildering appointment by Baker of this extremist to climate czar. Baker chose a man who not only wants to break the will of seniors but advocated for continued dependence on Russia, if need be, to supply the Commonwealth’s energy needs. Then again, it’s not so surprising. This is Massachusetts, where Boston Brahmins, the elite of elites, rule and a governor knows his place; attending to elitist special interests.