Some of readers who happen to be Democrats may be offended by this post, but it must be said: your party is hijacking a health crisis to fund green scams!

Whatever your take on the federal stimulus bill, the Malthusian Left, hitching their wagon to the climate ‘crisis’ and the Green New Deal, is determined to fight until the end. And their anti-modernism crusade has hit a new low point in the current Senate debate over the Coronavirus Aid, Relief, and Economic Security Act.

Senate Majority Leader Mitch McConnell has had enough and spoke to the nation about where the radical wing of the Democratic Party wants to go in a time of emergency. 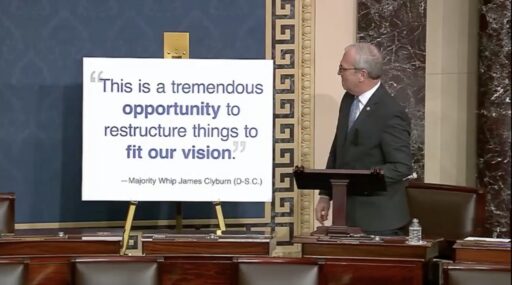 “For days now, we have been engaged in intense bipartisan talks to build emergency relief legislation on an historic scale,” McConnell stated yesterday. “Democrats and Republicans … crafted this version of this proposal together.

But … when the time came to vote on these urgent measures, our Democratic colleagues chose to block it. So, why … are Democrats filibustering the bipartisan bill they helped write?

Here are some of the items on the Democratic wish-list over which they chose to block the legislation last night.

Are you kidding me? This is the moment to debate new regulations that have nothing to do with this crisis? That’s what they’re up to over there. The American people need to know it.

Democrats won’t let us fund hospitals or save small businesses unless they get to dust off the Green New Deal?

I would like to see Senate Democrats tell the New York City doctors and nurses, who are literally overrun as we speak, that they are filibustering hospital funding and more masks because they want to argue with the airlines over their carbon footprint.

I would like to see Senate Democrats tell small businesses employees in their states, who are literally being laid off every day, that they are filibustering relief that will keep people on payroll because Democrats’ special interest friends want to squeeze employers while they’re vulnerable.

I would like to see Senate Democrats tell all the American seniors who have seen their hard-earned retirement savings melt away, as the markets track towards their worst month since 1931, that they’re continuing to hold up emergency measures over tax credits for solar panels.

So these are just a few of the completely non-germane wish-list items. Eleventh-hour demands that Democrats have decided are more important than Americans’ paychecks and the personal safety of doctors and nurses.

Remember what one of Speaker Pelosi’s top lieutenants in the House said a few days ago? Quote: “This is a tremendous opportunity to restrict things to fit our vision.” That’s the Democratic Whip over in the House, just laying it out there.

And we heard something similar here on the Senate floor last night. Here was one of our Democratic colleagues. Quote: “How many times are we going to get a shot at a $1-trillion-plus program?… I don’t know how many trillion-plus packages we’re going to have!”

How embarrassing. Talking like this is some juicy political opportunity. This is a national emergency.

We had days of productive bipartisan talks to get to this point…. But then, yesterday morning, the Speaker of the House flew back from San Francisco. And suddenly the Senate’s serious bipartisan process turned into this left-wing episode of Supermarket Sweep. Unrelated issues left and right.

I’ll tell you what will really lower our carbon footprint — if the entire economy continues to crumble, with hundreds of thousands more Americans laid off, because Senate Democrats won’t let us act!

Kudos to Mitch McConnell for exposing the ruse of parasitic energies whose future is tied to political favor, not consumer choice. Economic turmoil calls for consolidation and efficiency, not continuing to prop up the uneconomic. Wind and solar subsides should cease–as should special subsidies to other energies.

Editor’s Note: I’m no fan of Senator McConnell, who is the epitome of a Republican establishment that often sickens me in its lack of courage and kowtowing to special interests but I, too, must applaud him in this instance. This Green New Deal BS is nothing but a hedge fund rip-off scheme for extracting government rent from taxpayers. This attempt by Democrats to exploit a health crisis for this purpose is corrupt in the extreme and reveals a stunning lack of seriousness. I’m sorry if you’re offended but it must be said. I also encourage readers to listen to a speech given by Senator Kevin Cramer of North Dakota to the President of our United States Senate on this subject:

Senator Cramer gets it exactly correct, as I see it. For more on Senator Cramer’s speech and my own views on this subject listen to this podcast from The Crude Life.