The Dennis Farm has fascinating history and with their partnership with Cabot Oil & Gas, natural gas is now part of their story.

The Dennis Farm has been a valued partner here at Cabot for several years. We wanted to update our readers about some recent news from the Dennis Farm Charitable Land Trust, while also reminding everyone of the importance of the organization and the history behind it. 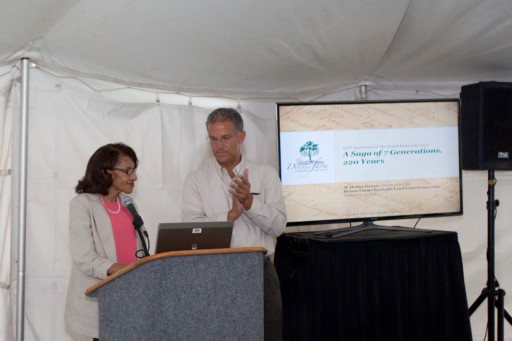 This past October, several hundred people took part in events associated with the sixth annual Dennis Farm Symposium. Students from Keystone College made up much of the audience at a forum focused on racial understanding on the first evening, and the audience for second day’s seminar was representative of a cross-section of local residents wanting to know more about the historic site in Susquehanna County and the pioneers who founded it.

More recently, the DFCLT hosted the Lonae A. Moore Memorial Forum, “It Begins With Each of Us: Foster Racial Understanding,” on February 7 at the National Constitution Center.

In this blog, we look back at our original peice Q & A with Denise Dennis – Part I, and take a deeper look at what makes the Dennis Farm Charitable Land Trust a national treasure and get a glimpse the reasoning behind signing a lease with Cabot in M. Dennis’ own words.

History of the Dennis Farm

Established by Hope Dennis and her niece, Madame Denise Dennis, in 2001, The Dennis Farm Charitable Land Trust (DFCLT) is a non-profit organization created to preserve a rare and beautiful historical and cultural resource in the Endless Mountains of Susquehanna County, Pennsylvania.

The family of Prince Perkins, free African Americans who emigrated to northeast Pennsylvania from Connecticut in 1793 with the original wave of settlement into the region following the American Revolution, settled the Dennis Farm. Their direct descendants, the Dennis family, have retained stewardship of the property to the present day, although it hasn’t been a working farm since the early twentieth century.

The history of the Dennis Farm and the Perkins-Dennis family is fully documented.  This continuous and documented ownership of property by African Americans, in a northeast county largely populated by European Americans, represents an overlooked and remarkable story in American history that holds lessons for us today.

The Dennis Farm is listed on the National Register of Historic Places.

The purpose of The Dennis Farm Charitable Land Trust is to continue to develop the Dennis Farm as an educational and cultural site for scholars, researchers, cultural heritage tourists, school groups, and others who are interested in this extraordinary history.

Towards the end of 2013, it was announced that Cabot had entered into a partnership the Dennis Farm Charitable Land Trust.

Of course, this isn’t the first time that a land trust or historical site had leased its land to an oil and gas company. More unique, though, is that this particular parcel of land has an amazing history and impossible to find anywhere else in the country.

It’s impossible to convey in one blog post the rich heritage of the land, as well as Dennis Farm Charitable Land Trust President Madam Denise Dennis’ drive to restore the farm to its former glory. Dennis, the great-great-great-great granddaughter of Perkins, is the author of several books, including “Black History for Beginners”.

Ms. Dennis has a unique and wonderful story to share about her heritage and what makes the Dennis Farm Charitable Land Trust such an amazing acreage of land. And so, we have invited her to a forum to express her full and firm views on her dealings and partnership with Cabot. Her comments are as follows:

Ms. Denis Dennis (DD) —  Public records in Massachusetts confirm that the Dennis family dates back to Concord, Massachusetts at the dawn of the American Revolution. Americans and even non-Americans are fascinated to learn that there were free black landowners–in the North–more than a half-century before the Civil War began and that the same family is a steward of the land in the 21st century.

So the farm represents a family that has had a front row seat to American history from April 19, 1775, right up to the current revolution in energy alternatives. Natural gas extraction in the early 21st century is now a part of the story of the farm.

We’ve received requests from schools (elementary, high schools, colleges, and universities) who want to visit the Farm, from historians and researchers and from people who are simply fascinated by the story of the property and the people who lived there.

Our objectives include restoration of the nineteenth-century farmhouse and construction of an interpretive center on the site of the old barn complex.  That way, visitors to the site can learn about the farm’s more than two-century-old history as they experience the site.

DD —   In the five years prior to signing a lease with Cabot, we were continuing with our plans for the DFCLT. An architect who specializes in historic structures assessed what is required to restore the farmhouse (which pre-dates the Civil War) prepared plans for achieving it, and gave us an estimate of the cost.

In 2008 and 2009, we had a partnership with the State University of New York (SUNY) Binghamton’s Department of Anthropology.  Binghamton held an archaeological field school at the Dennis Farm in the spring/summer sessions each year.  The doctoral candidate who directed the field school wrote his Ph.D. dissertation about the Dennis Farm and family, the artifacts they uncovered at the site and what the artifacts reveal about the daily lives of my ancestors.  His dissertation was a success; he now has his doctorate and continues to write about the farm.  His dissertation was the first study of free African American landowners in the rural North throughout the 19th century and it broke new ground in academia.

Through the Binghamton field school, we acquired the archaeological studies required for our National Register of Historic Places nomination (we were designated eligible for the National Register).  The partnership with Binghamton is also consistent with DFCLT’s educational mission.

The Dennis Farm Charitable Land Trust is involved with the Smithsonian Institution, the National Trust for Historic Preservation (NTHP) that placed the farm on its list of the rarest African American historical sites in the northeast US; the Endless Mountains Heritage Region (EMHR) and Preservation Pennsylvania.

In the last five years representatives from NTHP, Preservation Pennsylvania, EMHR and the University of Delaware are among those we’re involved with who’ve made field trips to the farm.  In 2006, I was a guest speaker at Keystone College and the University of Scranton; we are interested in working with them, as well.

DD —   The safety of the Dennis Farm and whether or not natural gas drilling would prevent us from proceeding with our plans for the DFCLT were foremost on my mind.   I wanted to know as much as possible about the industry because that seemed to be the best way to protect the property.

On the other hand, when I applied for college and had to write an essay on one of my personal qualities, I wrote about my curiosity and how it inspires me to learn.  I’ve been fascinated by everything I’ve learned about natural gas drilling and feel that I am, in a small way, now a part of an international industry.  I look forward to learning more.

DD — My decision was based on several years of in-depth research on horizontal hydraulic fracturing.  I read and evaluated information about the process and its effects, consulted with scientists, attended public forums in such places as the Academy of Natural Sciences and the Philadelphia Public Library, and talked with people I know in Susquehanna County who have leases. I arrive at my decision thoughtfully, weighing the pros and cons.

Future plans for the DFCLT are to complete the restoration of the Dennis’s last house on the farmstead so that it can be used for exhibits and small meetings. Foundation remains, miles of stone walls, and orchard stock are also being restored. A permanent parking area will be installed, and a new building will serve as a visitors center and hub for events and celebrations. Interested readers can find more information about the history, future plans for the site, and how to make arrangements for group tours at www.thedennisfarm.org