Descalzi joined the company in 1981 as an oil and gas field petroleum engineer and has been its CEO since 2014. 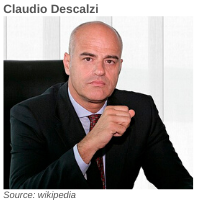 The board of directors also appointed Lucia Calvosa, professor of commercial law at the University of Pisa, as the new chairwoman. She was elected from the slate of candidates submitted by the ministry of economy and finance.

Calvosa is replacing Emma Marcegaglia, who had been the chairwoman of Eni since 2014.

“The commitments to continue our transformation process – which already made us a simpler, faster and more resilient integrated energy company –remain intact, as our determination to fight climate change and our efforts towards a just energy transition,” said Descalzi on a Facebook post on Friday.

“I’m proud to be able to support Eni in this new path and Today, more than ever, I feel so truly privileged to lead Eni, keeping the CEO role for the next 3 years,” he added.