Electric cars are no panacea. They have their place but are completely impractical in some situations and raise other issues such as those subsidies.

California and New York are delightfully good at making news that those in other states find somewhere between baffling and laughable. The bonus comes when the two states unconsciously tie their stories together as in de-energization and effectively eliminating conventional gasoline-powered cars. 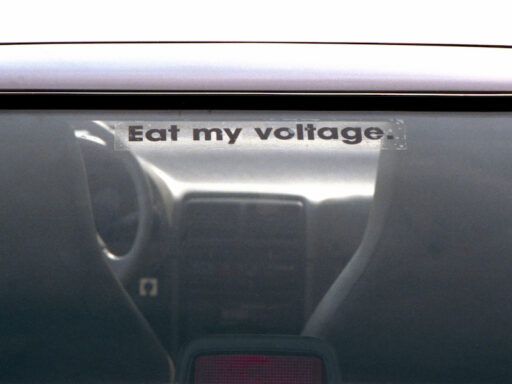 An electric vehicle in traffic can look much like any other vehicle. There are, however, ways to make it noticeable.

Assume for the sake of discussion that the California Public Utilities Commission, the state’s various utilities and the other entities involved have done their homework well enough to determine that de-energizing is truly necessary in a particular case and that it’s being handled correctly. We’ll give California the benefit of the doubt even if it seems likely that residents and businesses impacted by the de-energization might be less understanding.

Meanwhile on the opposite coast, Democratic Sen. Chuck Schumer of New York has unveiled his plan to provide federal subsidies to encourage drivers to trade their gasoline-powered cars for electrics.

While some must surely be applauding, there’s reason to be skeptical beyond the cost that varies among accounts of Sen. Schumer’s proposal, beyond the fact that the senator’s New York Times opinion piece seems to target only individual vehicle-owners, beyond the idea of federally funding the charging stations that would compete with privately funded gas (and, one would hope, charging) stations and beyond the impact on the individual’s freedom of travel by the electric vehicle’s limited range and lengthy charging times. But we’ll give the senator the benefit of the doubt, too, and set all of that aside for a moment.

Now, let’s consider a hypothetical situation in which Californians have overwhelmingly embraced electric cars made affordable by taxpayer-funded subsidies and are suddenly faced with a situation that requires widespread de-energizing for more than a short time. All of their chargers have instantly become useless and their electric vehicles will soon follow.

Gasoline and diesel fuel tanks can be filled by a hand-pump or a generator-powered electric pump far more quickly than the individual solar-powered chargers can recharge the electrics’ batteries. For that matter, gas and diesel can be delivered directly from a tank truck and those early adopters whose vehicles run on compressed natural gas are equally lucky.

The electric cars’ owners could use gasoline- natural gas-, propane- or diesel-powered generators for recharging, of course, but that pretty much defeats the whole point of buying an electric car in the first place.

Electric cars absolutely do have their role to play and it’s a valid one, but they’re not pollution-free and they’re not universally practical. To subsidize drivers into relying on them exclusively would be poorly thought out, completely wrong, breathtakingly expensive and apparently, the only way to arm-twist those who don’t want electrics into buying buy them. Tax breaks for purchasers of new electric cars have already been introduced, but other than saving money for those wealthy enough to afford electrics in the first place, they haven’t been particularly successful. Sen. Schumer did, after all, write in his opinion piece that “the transition to electric vehicles … is happening too slowly.”