Electricity Prices About to Spike Big Time in Virginia

[Editor Comment: Electricity prices are about to go up in a major way for Virginians, thanks to Governor Ralph Northam’s off-shore wind debacle at the expense of ratepayers.]

Virginia has just completed installing two wind turbines off the coast of Virginia Beach, costing $300 million, to demonstrate a proof of concept project for Virginia’s Governor Ralph Northam. The full project envisioned is expected to be the largest wind farm in federal waters in the United States—over 180 turbines constructed 27 miles offshore, estimated to cost $8 billion or more when completed and operating by 2026.

The builder intends to submit a construction and operations plan to the federal government by 2022 and hopes to get the first block of turbines online in 2024. This will be the start of the Governor’s mandate to utilities for 5,200 megawatts of offshore wind energy by 2034. The State’s omnibus energy bill passed during the height of the coronavirus pandemic commits the state to carbon-free power by 2045.

The project will expose consumers to enormous electricity costs. The builder, Dominion Energy, is a regulated monopoly, which allows it to receive guaranteed profits as long as the regulators approve its actions. The Virginia General Assembly has ordered regulators to regard wind energy as “in the public interest,” which limits their ability to force the utility to cut costs or issue customer rebates.

The only offshore wind farm currently operating in the United States is off of Block Island, Rhode Island, which has five turbines in state waters. Because that location was using diesel generators floating nearby for its electricity generation, the economics of the offshore wind farm were comparable with the existing generation capability. That is not the case for Virginia, which has many other options.

The massive wind towers were assembled in Nova Scotia and brought to the waters off Virginia Beach on a special ship that held them vertically. The 6-megawatt turbines were driven into the sea floor like nails, standing 620 feet above the waves—65 feet higher than the Washington Monument. The towers occupy a 112,800-acre site that Dominion Energy leases from the federal government and they are linked to shore by undersea cables.

These turbines will start generating electricity later this summer, but only when the wind blows—about 45 percent of the time. They will need to be backed-up by other power sources, such as natural gas, because the current state of battery storage technology is extremely expensive and can generally store only up to five hours of power for the grid, which is insufficient to provide the power needed when the wind is not blowing.

Virginia Governor Northam has backed a $350 million effort to make the Port of Virginia the deepest on the East Coast. That will enable it to become a staging area for assembling the gigantic wind turbines and possibly lure manufacturers to locate there.

The Energy Information Administration (EIA) in its Annual Energy Outlook 2020 provides the capital costs and the levelized costs of selected generating technologies. According to the EIA, offshore wind is one of the most expensive technologies of the slate of 22 technologies that it considers in its Annual Energy Outlook. Per kilowatt, offshore wind’s capital cost is $5,446, compared to a natural gas combined cycle plant of $954 and an onshore wind plant of $1,319—that is, it is 4 to 6 times more expensive.  (See graph below.) At a cost for the project at $8 billion, the project is even more expensive than EIA’s estimated costs. 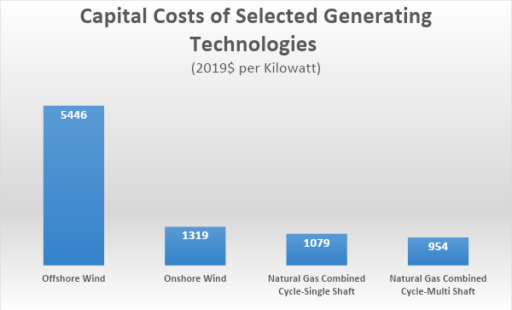 When the costs are put on a levelized basis for new generating sources entering service in 2025 including operation and maintenance costs, the levelized costs for offshore wind is still 3 times higher than the levelized costs for onshore wind and for natural gas combined cycle. These levelized costs do not include subsidies nor do they include the cost of back-up power for the wind technologies. Including the costs imposed on the system by the intermittent wind technologies that require back-up storage or back-up power would make natural gas even more economically attractive than onshore wind.  (See graph below.) 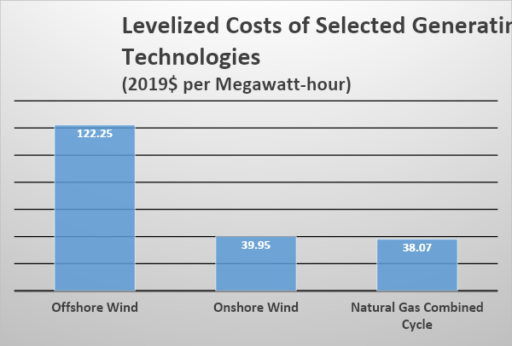 The Virginia Beach offshore wind farm is not in the economic interest of electric ratepayers in Virginia for it will cost at least 3 times more than a natural gas plant and the ratepayers will have to pay those rates because the state legislature has deemed the offshore wind plant to be “in the public interest.” In essence, the Virginia state legislature has said that much more expensive electricity prices are in the public interest. The wind plant is still years away and will have to get approval from the federal government before it can be completed, which should give Virginians enough time to protest the extravagant costs.