[The Endless Mountains Health System (known simply as EMHS locally) is unique in that it also operates a food bank with a little help from its friends.]

Endless Mountains Health Systems (EMHS) joined a growing number of organizations in Susquehanna County, in July 2019, to help curb food insecurity by starting a food bank. During those summer months, offerings to approximately 90 families consisted primarily of fresh produce and dry goods. The CEO Weinberg Food Bank, which supplies the majority of what EMHS distributes, also furnishes frozen meat and dairy products, but the food bank volunteers lacked a way to keep those commodities cold. 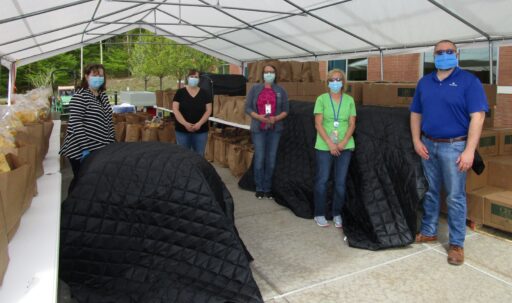 This past week, Cabot Oil & Gas Corporation donated funds to EMHS for the purchase of three thermal pallet covers and three insulated blankets. The contribution was much appreciated by food distribution coordinator Paula Anderson, who also serves as the director of human services for EMHS.

“Our little food bank has really grown,” she related. When the current COVID-19 health crisis forced the temporary closing of so many business and sent workers home to an uncertain future, the number of families relying on EMHS for food supplements nearly tripled. But the EMHS staff members who volunteer to package and hand out the food have also streamlined their process.

EMHS CEO Loren Stone explained that the food bank resulted from a study conducted by the hospital to target unmet needs in the county. “Food insecurity was something we were able to address, and it’s important now more than ever,” he remarked.

Hospitals are not generally known for food banks, Anderson noted, and the volunteers are proud of the program they have built up and the opportunity they have to serve the community. They never know what they are going to get from the CEO Weinberg warehouse in Pittston. Offerings range from bags of  apples or potatoes to canned fruit and vegetables or fresh lettuce, so the workers have learned to be flexible.

“We have a great team. It’s the same people every month,” said Stone. Purchasing the thermal covers and blankets will allow the volunteers to provide meat, milk and cheese to families in need throughout the warmer months to come, Stone added, as he thanked Cabot for the donation. “These will last for years.”

Families needing food assistance who are not currently served by another agency may register for the June 26 distribution by calling Anderson at 570-278-5529.