In late October 2020 I submitted personal comments on the New York Department of Environmental Conservation (DEC) proposed Part 496 that defined the emissions limits for the Climate Leadership and Community Protection Act (CLCPA).  That law sets targets based on 1990 emissions data and this regulation developed the emission inventory for 1990.  The rule was recently adopted and the regulatory package included a document that assessed public comments.  This post follows up on the post on my comments and describes their response to my comments.  It is relevant to CLCPA implementation because the DEC did not respond to my primary objective – monitoring data do not support the emphasis on methane emissions data in the inventory and the CLCPA.

I am following the implementation of the CLCPA closely because it affects my future as a New Yorker.  If DEC gets the 1990 baseline wrong it will be all the more difficult to get to the aggressive CLCPA targets.  The opinions expressed in this post do not reflect the position of any of my previous employers or any other company I have been associated with, these comments are mine alone.

This 1990 emissions inventory is important because many of the targets of the CLCPA are based on reductions from this baseline.  For example, there is a target to reduce GHG emissions to 60 percent of 1990 emissions levels by 2030.  The CLCPA includes specific requirements for the 1990 emission inventory that I am positive no legislator who voted for the law understood.

The law mandates an aggressive schedule for developing this inventory.  The CLCPA 1990 baseline is supposed to be set by the end of 2020 but the first statewide greenhouse gas emissions report isn’t due until 2021.  The statewide emissions data report is defined as a “comprehensive evaluation of the inventory best available science and methods of analysis, including the comparison and reconciliation of emission estimates from all sources, fuel consumption, field data, and peer-reviewed research.”  The law says:

“Shall clearly explain the methodology and analysis used in the department’s determination of greenhouse gas emissions and shall include a detailed explanation of any changes in methodology or analysis, adjustments made to prior estimates, as needed, and any other information necessary to establish a scientifically credible account of change.”

The 1990 baseline for the statewide GHG emission limits has similar quality requirements:

These requirements significantly affect the greenhouse gas (GHG) emission total for the State.  According to the latest edition of the NYSERDA GHG emission inventory (July 2019) Table S-2 New York State GHG Emissions 1990–2016 the New York State 1990 GHG emissions were 236.18 MMtCO2e The proposed Part 496 regulation 1990 emissions inventory total is 401.38 MMtCO2e for an increase of 165.2 MMtCO2e.  When the draft Part 496 regulation came out, I described the differences between these two inventories. 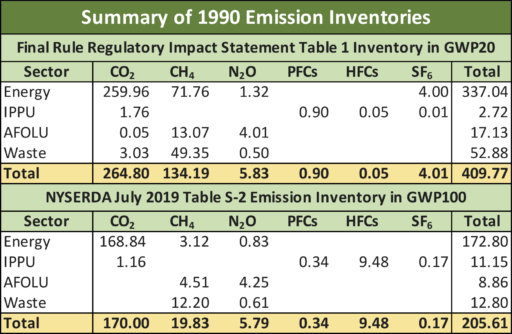 To its credit New York State requires that DEC respond to comments on proposed regulations.  Unfortunately, too often the answer is in the back of the book and this is considered just a formality.  In my opinion this was the case with the response to my  comment Part 496.  I consolidated and annotated all the responses to my comments in DEC response to Caiazza Comments.  I will just highlight a few of my concerns with their responses.

For a variety of reasons DEC dismissed my comments suggesting that the documentation was inadequate. I claim that in order to “utilize the best available scientific, technological, and economic information on greenhouse gas emissions and consult with the council, stakeholders, and the public in order to ensure that all emissions are accurately reflected in its determination of 1990 emissions levels”, that DEC must document each value listed in the inventory with the emission factor, activity factors or throughput, and the reference and rationale for each.  DEC claims they provided the information.  I maintain it is impossible to replicate their numbers with the information provided because the references are so vague it is impossible to trace the necessary information back to the references provided.

It is particularly troubling to me that the response to comments does not address changes to the draft and final inventory.  As shown below, there were substantive changes to the CO2 and CH4 emissions data.   As it stands now, the council, stakeholders and public just have to accept the numbers without explanation – hardly a hallmark of “best available scientific, technological, and economic information” required by the CLCPA.  Clearly, if there was adequate documentation he derivation of each number and the differences could be easily explained.

My over-arching comment was that there was too much of an emphasis on methane.  DEC summarized my comment as follows: “Some commenters suggested additional or alternative emission limits, including interim limits to maintain momentum or targets that recognize the long-term impacts of GHGs. Otherwise, the law over-emphasizes the role of methane or under-emphasizes the role of carbon dioxide by applying the 20-year rather than the more standard 100-year GWP.”

DEC evaded a direct response by correctly noting that the CLCPA required consideration of the upstream emissions and the 20-year GWP.  The authors of the CLCPA deliberately included those provisions as part of New York’s irrational war against natural gas.  While this accounts for much of the differences between the two inventories, the state’s choice of emission factors also contributes. DEC did not directly respond to a critical question about their inventory.

Lan et al., 2019 evaluated data from the National Oceanic and Atmospheric Administration Global Greenhouse Gas Reference Network and determined trends for 2006–2015.  This covers the period when the primary target of the CLCPA upstream emissions requirement, Pennsylvania shale-gas production, increased tremendously.  According to the plain language summary for the report: “In the past decade, natural gas production in the United States has increased by ~46%.” Methane emissions associated with oil and natural gas productions have raised concerns since methane is a potent greenhouse gas with the second largest inﬂuence on global warming.

As a result of the fact that the relevant high quality, long-term monitoring network does not show a trend consistent with the Part 496 presumption that a big source of methane is from Pennsylvania natural gas extraction, I believe it unequivocally shows these calculations of methane emissions from shale gas are invalid.

The CLCPA mandates the law will be implemented using “best” science.  Part 496 does not meet that condition.  Francis Menton explains the exposition of the scientific method from physicist Richard Feynman’s classic series of recorded lectures:

“[W]e compute the consequences of the [hypothesis], to see what, if this is right, if this law we guess is right, to see what it would imply and then we compare the computation results to nature or we say compare to experiment or experience, compare it directly with observations to see if it works.  If it disagrees with experiment, it’s wrong.  In that simple statement is the key to science. . . . “

I found references that directly contradicted the Part 496 methane emissions data and, more importantly, a citation that found that the observed monitoring observations of methane do not support the inflated values used in the inventory.  It disagrees, it’s wrong, so the Part 496 inventory fails a basic tenet of science.  DEC’s response to comments did not address this issue.