Energy Dominance Era Is Here for Real in America

Make no mistake. The era of real American energy dominance has finally arrived thanks to the ingenuity and industriousness of our oil and gas sector.

The United States became the world’s largest producer of oil last year and the world’s largest producer of natural gas in 2009. Texas, North Dakota, and Wyoming are setting oil production records, along other U.S. states due to hydraulic fracturing and horizontal drilling that allow shale basins to be drilled and the oil released into production. Most of the wells producing oil today are being drilled horizontally in shale basins rather than vertically, as the first oil wells were drilled. 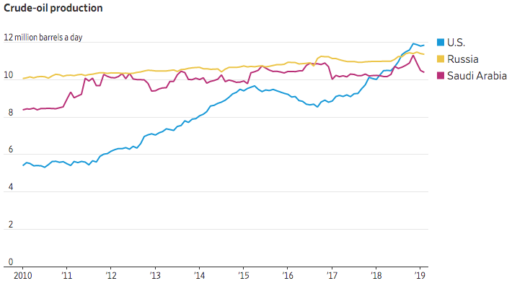 U.S. oil production in 2018 was 10.96 million barrels per day—17 percent more than in 2017. It is averaging 9 percent more for the first 4 months of 2019 than the annual average production for 2018. U.S crude exports reached 3.6 million barrels of crude per day during the week ended February 15—the highest since Washington ended restrictions in late 2015.

If Texas were a country, it would be the world’s third largest oil producer sometime this year, behind only Russia and Saudi Arabia. The main oil basin in Texas is the Permian Basin, which is one of the most prolific oil and natural gas producing regions in the United States. The Permian Basin is approximately 250 miles wide and 300 miles long, spanning West Texas and southeastern New Mexico. It encompasses several sub-basins, including the Delaware Basin and the Midland Basin.

Wyoming produced 88 million barrels of oil in 2018, with new wells contributing over 21 percent of that production. According to the Wyoming State Geological Survey, the last time oil production was at this level was in 1993. In 2018, 599 new wells were completed in Wyoming. The state, particularly in eastern Wyoming, is seeing more “wildcat” wells, which are “wells outside known fields or new wells which are determined to have discovered oil or gas in a pool not previously proven productive.” Over 46 percent of new Wyoming wells in 2018 were horizontal wells.

Most production, especially in Wyoming’s Powder River basin, is from tight sand and shale reservoirs where the oil and gas is widely distributed throughout the pore spaces of the rock. In 1943, all oil and gas wells in Wyoming were in traditional, named fields. Over the last decade the drilling trend in eastern Wyoming is increasingly toward wildcats.

America’s largest oil hub is in Cushing, Oklahoma. The U.S. petroleum industry is planning to build about 4.8 million barrels of additional storage capacity at Cushing and as many as seven new pipelines to move oil to and from the hub. Cushing is a key trading hub for U.S. and Canadian crude oil despite the growing export market.

U.S. record oil production changed global oil markets over the last several years, surpassing production from Russia and Saudi Arabia. U.S. production was largely responsible for an oil glut in late 2014 that resulted in Saudi Arabia ramping up production to protect its market share and to drive U.S. shale producers out of business.

The plan, however, backfired and oil prices plunged from around $100 per barrel in mid-2014 to about $30 per barrel in January 2016. Because of the strength of U.S oil production, Saudi Arabia reached out to Russia and other non-OPEC producers to form the OPEC+ group to try to take back control of global oil markets. In addition to U.S. oil production, factors including the loss of both Iranian and Venezuelan oil production, the outcome of U.S.-China trade talks, and economic growth are issues affecting global oil production and prices.

For decades, U.S. economic, defense, and foreign policy was affected directly by our dependence on other regions for our basic energy supplies. The miracle of American technology coupled with resource wealth has significantly lessened these threats to our national and economic security.

Editor’s Note: American energy dominance has been achieved and it’s all due to the shale revolution. This is a point that’s easy to lose sight of with all that’s happened over the last decade. But, we need to remember, it was only a decade ago that dreams of energy dominance were considered foolish. Now, it is here for real. There are always those who want to distract from this message with negativity for purposes of their own special interest agendas but the benefits to American consumers from American energy dominance are simply undeniable.