[Editor’s Note: The proposed Federal leasing ban would be completely counterproductive both environmentally and economically.]

In September 2020, the American Petroleum Institute (API) introduce a report addressing the impact of a ban on federal leasing in the United States. Their analysis explains the burdens that a leasing and development ban on federal lands and waters could put on the nation’s economy, energy prices, employment and consumerism. To help you further understand how this would impact you and your community, we dove into the report and broke it down.

Currently, energy produced on federal lands accounts for 12 percent of the nation’s natural gas production and 22 percent of U.S. oil production. A ban on leasing and development on these grounds would significantly reduce our production without these valuable reserves. But the negative impacts stretch far beyond the hit that the industry will take.

For starters, the nation’s energy security would significantly decrease with the placement of a ban. Restricting federal leasing would cause natural gas and oil production to decrease by 6 and 13 percent, respectively. While this may not seem significant at first glance, the effects could be devastating. With less production on our home turf, the United States would end up paying more than $500 billion to foreign energy suppliers on net imports. 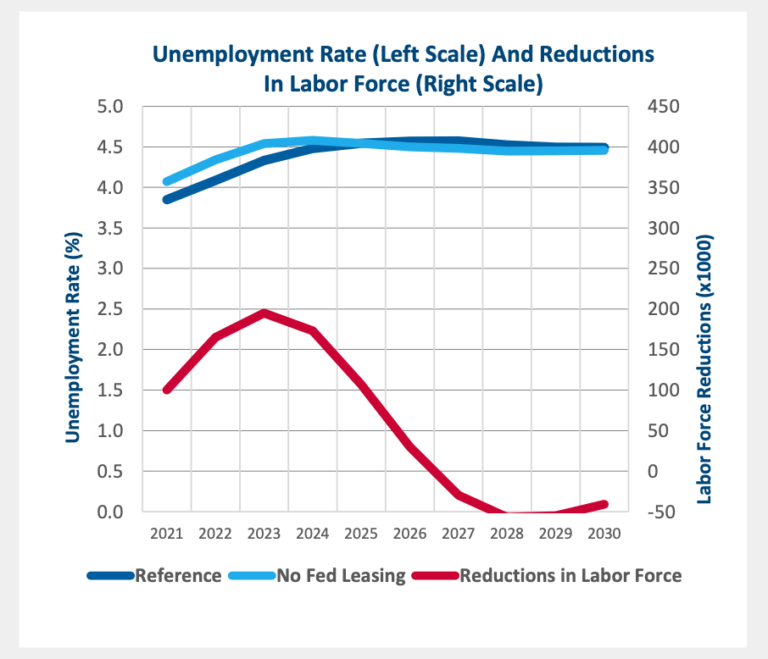 Besides putting the nation’s energy independence at risk, the economy would also suffer the consequences of a ban, as natural gas prices would increase by 4.5 percent. In only a few short years, nearly a million jobs will be lost. Additionally, by 2030, we would see the GDP drop by $700 billion. The slowdown in economic progress would inevitably cause the cost of goods to increase, meaning higher grocery and utility bills. In fact, households will spend a total of $19 billion more on energy over the next 10 years.

The report also highlights how a federal leasing ban would do more harm than good for our environment. With less natural gas and oil resources available, the nation would be forced to turn to other fossil fuels like coal to maintain energy production. Since natural gas is far more sustainable and cleaner than coal, we would even see a two percent increase in our nation’s CO2 emissions by 2030.

As you can see, the implications of a ban on federal leasing reach far beyond the operation of the gas industry itself. Our economy, environment and energy independence would suffer without the benefits of abundant natural gas production. For more information or to read the entire API report, click here.