Cabot Oil & Gas Corporation was again a major contributor to the Fill a Glass With Hope campaign, one of five Keystone Sponsors to give $25,000 to the cause.

On Jan. 3, First Lady Frances Wolf joined Agriculture Secretary Russell Redding, dairy industry leaders and state-wide food bank operators to open the famous Farm Show food court with a milkshake toast and a nod to the Fill a Glass With Hope campaign, which provides fresh milk at no cost to families in need. 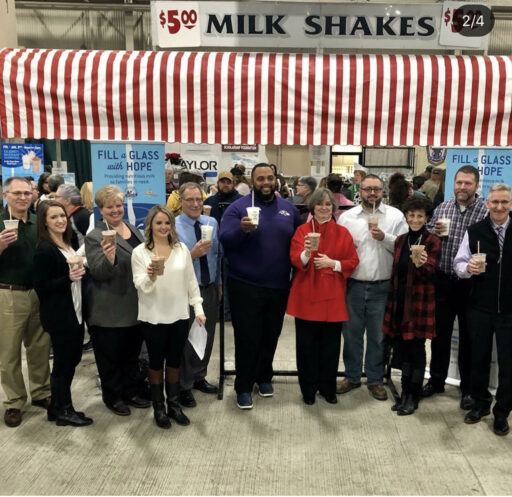 The field of supporters grows larger as the Fill a Glass with Hope program grows larger, as seen in the annual milkshake toast proposed at the opening of the Pennsylvania Farm Show food court. Photo: Rick Huduk

Since its inception in 2005, the pilot program launched in Central Pennsylvania and Pittsburgh was expanded to include the entire Commonwealth and has made more than 14 million servings of milk available via Pennsylvania’s nine-member food banks. Jane Clements, executive director of Feeding Pennsylvania, manages the program on behalf of the PA Dairyman’s Association and the American Dairy Association.

Cabot Oil & Gas Corporation was once again a major contributor to the Fill a Glass With Hope Program, this year one of five Keystone Sponsors to donate $25,000 toward the efforts. According to the PA Dairyman’s Association, each dollar translates to eight glasses of milk.

“We could not do this without our dairy farmers and processors and the support of corporate sponsors like Cabot Oil & Gas,” said Clements- Smith. “Feeding Pennsylvania and our member food bank, the Weinberg Regional Food Bank, are incredibly grateful for the extremely generous support which will ensure that Pennsylvanians facing hunger in northeast Pennsylvania have access to the essential vitamins and minerals that fresh milk has to offer.”

Cabot’s contribution was significantly higher than in 2019, due largely to the overall increase in natural gas production over the past year. Other companies also stepped up their commitments this year, Clements-Smith noted. “That means we will have a stronger pot of money to get us started for accessing milk from Pennsylvania dairies,” she explained. “Our program is only as strong as the donations we bring in.”

Six school Susquehanna County districts hosting Children’s Produce Markets benefit directly from the Fill a Glass with Hope program through the Weinberg Food Bank. The food bank also assists more than 700 families throughout the county, amounting to more than 3,400 individuals receiving more than 5,200 half gallons of milk per year, as well as fruits and vegetables. Markets are set up at schools in the Blue Ridge, Elk Lake, Forest City, Montrose, Mountain View, and Susquehanna Community school districts.

“Each and every year, our relationship with the Weinberg Food Bank grows, and 2020 will be a spectacular year,” stated George Stark, Cabot’s external affairs manager. “We are proud of our relationship with the Fill a Glass with Hope program and excited to watch it grow in the communities that we serve. Collectively, the partnership has benefited many and will continue to help those in need.”

According to Gene Brady, executive director of the CEO Weinberg Food Bank, most of the fresh produce stocking the shelves at the food bank originates with donations processed by the Mid-Atlantic Regional Cooperative at the port of Philadelphia. Shipping costs average 18 cents per pound.

Milk must be purchased from local cooperatives, which is dependent on monetary contributions from companies like Cabot Oil & Gas.

Feeding PA’s priorities shifted in recent years to moving more fresh product, and milk was one of the most requested food items, according to Clements-Smith. Milk’s relatively short shelf life doesn’t lend itself to efficient donation.

“With the opening of the Children’s Produce Market at Lathrop Elementary School in 2018, every public school family in the Susquehanna County was within reach of fresh, healthy food at their schools,” said Brady. The CEO Weinberg Food Bank serves 12,750 people each week in a four-county area.

“Cabot is a really generous supporter of Fill a Glass,” Brady related. “They do a lot to help people.”

Brady noted that there are more than 74,000 “food insecure” people in Northeast Pennsylvania who, on average, run out of food two days per week. “Sadly, one in five children in the region are hungry,” he remarked. Corporate donations and public awareness are the keys to the Weinberg Food Bank achieving its Hungry to Healthy program goals by 2025.

The goals are to adequately serve every family in need through support of partner agencies and to create linkages to serve families facing emergencies who may never have before required a food safety net. “The support of Cabot has led to other donations and partnerships within the gas industry, but none have been as consistent as Cabot,” Brady related.