Although natural gas prices in New England at the Algonquin City Gate trading hub (Boston) spiked a few times this past winter, they didn’t spike anywhere near as much as the previous winter. In January 2018, prices at Algonquin spiked to $78.98/thousand cubic feet (see New England’s Lack of Pipelines = Most Expensive Gas in the WORLD). In January 2019, prices at Algonquin never got over $13.56/Mcf. The difference? Foreign LNG imports.

Most of the LNG imports this winter came from Trinidad. One or two came from Russia (with love). This situation of importing LNG to New England when the prolific Marcellus is just a few hundred miles away but can’t flow more gas because pipeline projects are being blocked, is an ongoing obscenity. This should not be happening. Not in America, land of the FREE and home of the brave. 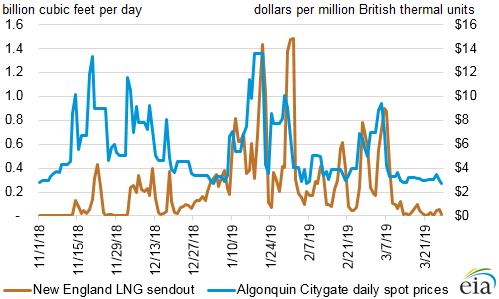 During the winter of 2018–19, however, the timing of additional incremental natural gas supply provided by LNG imports played an important role in moderating extreme price volatility. Despite periods of similarly cold weather, prices at Algonquin Citygate peaked at $13.56/MMBtu and averaged about $7/MMBtu in January and February, compared with $12.70/MMBtu on average for these months in 2014–2018. 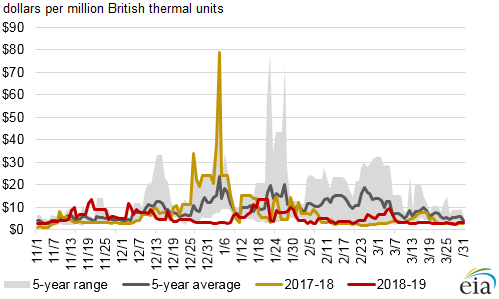 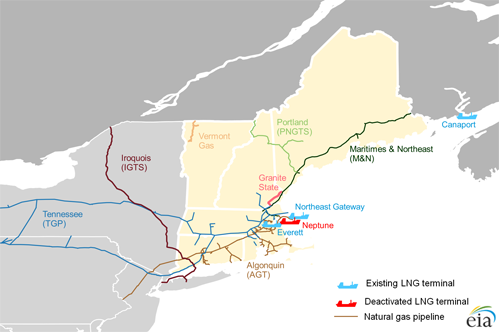 A fourth terminal—the offshore Neptune LNG facility (0.4 Bcf/d capacity), located 20 miles offshore from Boston and served by a Floating Storage and Regasification Unit (FSRU)—was placed in service in 2010, but it was later decommissioned because of low utilization. While in operation, the terminal received only two cargoes, in March and August 2010.

Natural gas sendout from the Northeast Gateway contributed about 0.5 Bcf/d of additional natural gas on the days of peak demand in mid- and late-January when prices at Algonquin Citygate were the highest, at $13.56/MMBtu on January 18–21 and $10.04/MMBtu on January 29. The combined sendout from the Northeast Gateway and Everett terminals averaged 0.58 Bcf/d on January 20–22, 0.72 Bcf/d on January 30–31, and reached an all-time record of 0.83 Bcf/d on February 1, effectively moderating daily price increases by sending more natural gas supply to the New England market. In comparison, December 2017 through February 2018 peak sendout from the Everett terminal was 0.31 Bcf/d, or 0.5 Bcf/d lower than in the same period in 2019.

Canaport terminal in Canada also contributed to meeting peak demand in New England this winter by increasing LNG sendout on the days of the highest spot prices at Algonquin Citygate. The sendout at the terminal averaged 0.69 Bcf/d on January 20–21 and 0.77 Bcf/d in late-January 2019, compared with 0.59 Bcf/d peak sendout during the winter months of 2017–18. 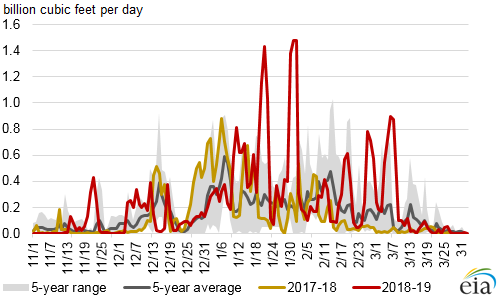 Other factors beyond the timing and the availability of incremental LNG supply likely contributed to moderating spot natural gas prices in New England during winter 2018–19, including: