Fossil fuel divestment is intended to not only frustrate oil and gas development but, more importantly to its advocates, squander the fruits of capitalism.

The fossil fuel divestment movement is a social activism campaign seeking to malign the natural gas, oil, and coal industries and pressure investors to withdraw their capital from such enterprises. Like the phrase “climate change denial,” the phrase “fossil fuel divestment” is used to convey to an uncritical audience that the social activism campaign is one of profound moral superiority to an evil alternative.

The accusation of “climate change denial” implicitly compares opposition to the global warming agenda with the odious ideology of Holocaust denial. Likewise, “fossil fuel divestment” is meant to conjure associations with morally righteous causes, like the social activism toward divestment from South Africa’s apartheid regime. The fossil fuel divestment movement’s profound error, however, is that the natural gas, oil, and coal industries are, far from being malevolent forces, supremely important to the wellbeing of humanity.

Divestment as a tactic

A divestment movement as such—i.e., a social activism campaign to discourage certain business practices—is an ethically neutral tactic. Indeed, divestment can be a worthy social cause or an unworthy one. When companies engage in practices that violate moral standards it is a perfectly reasonable response for the public to express moral censure and to use free speech to convince investors to place their money elsewhere.

The purpose of divestment movements is primarily rhetorical. It is to cast a pall over certain companies or industries. As William MacAskill wrote in The New Yorker:

“Campaigns can use divestment as a media hook to generate stigma around certain industries, such as fossil fuel. In the long run, such stigma might lead to fewer people wanting to work at fossil-fuel companies, driving up the cost of labor for those corporations, and perhaps to greater popular support for better climate policies…If divestment campaigns are run, it should be with the aim of stigmatization in mind. However, campaigners need to be careful. First, there is a risk of confusing people—suggesting that divestment will directly hit companies in the pocketbook when the evidence mostly suggests that it won’t.”

Though the efficacy of divesting from companies has been called into question by academic researchers, the moral aspect alone is enough to motivate some activists. On moral grounds, divestment from certain sorts of companies makes perfect sense. Consider, for example, companies that contribute to tyranny or cruelty by doing business with authoritarian states like the People’s Republic of China. Or consider companies that are themselves intricately woven into the governments of anti-freedom regimes, such as Russia’s state-owned energy companies Gazprom and Rosneft.

Consider also companies that engage in labor practices that would enrage us if they took place in our own countries, such as the coercion of child laborers in the Democratic Republic of Congo who mine the rare earth metals that go into electric vehicle batteries and solar panels. It is reasonable, even admirable, to encourage thoughtful investment that avoids perpetuating social evils like these.

Investors should conscientiously judge the moral worthiness of their holdings. Our conscientious judgment is that contrary to the sorts of enterprises described above, privately-owned natural gas, oil, and coal companies have been and will continue to be some of the greatest benefactors of human economic advancement the world has ever known.

Natural gas, oil, and coal produced in countries with strong rule-of-law institutions, like the United States, are bringing people out of poverty and simultaneously weakening the grip of bad actors in the Middle East and Eastern Europe. The clearest example of this at present is the export of liquefied natural gas by U.S. produces to countries like Poland that have historically been at the mercy of Russia’s energy oligarchs.

When considering divestment demands, fund-managers should ask certain questions: Are companies operating within the rules established by rightful legislative or regulatory authorities? Are companies providing a good or service that provides value? Natural gas, oil, and coal companies should be judged by the same standard.

People across the globe continue to endorse resoundingly the value that natural gas, oil, and coal provide for them each day by opting into the enormously useful energy they supply. That is fundamentally what an investment return is: a demonstration that other human beings derive value from the good or service a company provides and that the company is able to do it in a financially sustainable way. By investing in privately-owned natural gas, oil, and coal enterprises, funds are building opportunities for more of those win-win propositions.

The entities that have come under the most pressure from the fossil fuel divestment movement are university endowments, public pension funds, and charitable foundations, like faith groups and family trusts. According to 350.org, an outfit that serves as the divestment movement’s hub, “Over 1110 institutions have now committed to policies black-listing coal, oil and gas. These include sovereign wealth funds, banks, global asset managers and insurance companies, cities, pension funds, health care organizations, universities, faith groups and foundations.”

While it is often universities’ own students who are clamoring the loudest for their institutions to divest, the same cannot be said about the beneficiaries from public pension funds. And for good reason. As  Institute for Energy Research CEO Robert L. Bradley Jr. explained in the Washington Examiner:

State pension funds manage retirement benefits for public employees, such as teachers, firefighters, and police officers. And these plans are heavily invested in the energy industry. Nearly 30% of fossil fuel industry shares are held by pension funds. And almost 20% are owned in individual retirement accounts. Because they’re high performing, fossil-fuel-related stocks help secure public employees’ retirement plans. An average investment portfolio featuring fossil fuels outperforms a divested portfolio of equal risk by 0.5% per year over the long run, according to economic consultant Compass Lexecon. That might not sound like much, but over several decades it amounts to tens of thousands of dollars per worker.

That’s why divestment would hurt America’s retirees the most. Were they to divest, the nation’s 11 top pension funds would risk losing up to $430 million a year and almost $4.9 trillion over 50 years. Specifically, the California Public Employees’ Retirement System and New York’s five pension funds would risk missing out on nearly $290 million and $120 million per year, respectively.

Pension fund managers, as well as the managers of other institutional funds, have a responsibility to deliver the best results possible to the people whose money is on the line. In terms of performance, natural gas, oil, and coal stocks continue to shine. Even among activists who support fossil fuel divestment, the more informed see a conundrum. “The climate movement in some ways has the most difficult goal:

To convince people to divest from the energy we rely on every day, from stocks that make up a massive part of the economy. They perform well, too,” Rebecca Leber wrote in The New Republic. “In absence of climate legislation, these stocks will continue to perform well, especially oil and gas. An average 10-year return on investment for oil and natural gas stocks at 11.5 percent, higher than the overall 5.6 percent returns on college endowments, according to the oil trade group American Petroleum Institute.”

Divestment can be a worthy tactic in striving for a better world. Investors should think seriously about where they put their money. But divestment is better left for cases of genuine injustice and unscrupulous behavior—of which there is no shortage today. Natural gas, oil, and coal companies that abide by laws and norms in North America, Western Europe, Japan, and other regions where rights and freedoms are upheld are not the enemies the divestment movement asserts. These companies, rather than doing the world harm, are some of its greatest benefactors.

Global energy demand rose 2.3 percent last year, with natural gas, oil, and coal making up more than two-thirds of that increase. Demand is expected to continue growing—by 2050, according to the U.S. Energy Information Administration, we should expect it to be 50 percent higher than today, with fossil fuels accounting for 70 percent of the increase. This is, of course, precisely why natural gas, oil, and coal are attractive investments.

According to the International Energy Agency, hundreds of millions of people have gained access to modern energy over the last two decades, especially in China and India. Nevertheless, around a billion people still today do not have electricity. Those energy-starved people stand to benefit most from the natural gas, oil, and coal industries and they deserve to be free to select the most accessible energy sources available. As was the case when North America and the other wealthy parts of the world industrialized, coal tends to provide a great option for those mired in energy poverty. That’s why China is currently building more coal-fired capacity than the entire U.S. coal fleet supplies today. As described above, Poland is now looking to U.S. gas producers to provide it with energy free from the baggage of dealing with the corrupt Russian regime.

Affordable, reliable energy is a vital building block for the material advancement that people in the world’s wealthiest countries enjoy, but one that people in many parts of the world have yet to experience. Natural gas, oil, and coal have proven themselves time and again to be the low-cost, flexible fuels that upstart economies need to get going. Simply put, the natural gas, oil, and coal industries in the U.S. and other free countries are a powerful global force for good.

It is not fossil fuel divestment, but fossil fuel investment that individuals concerned with global health and happiness should embrace. 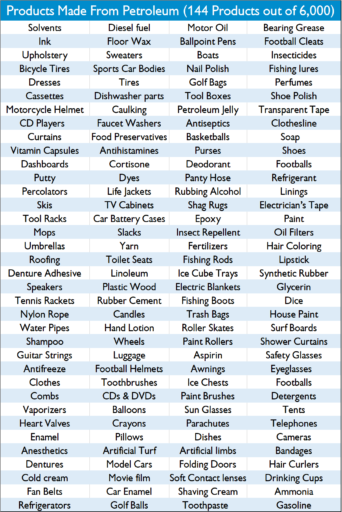