Global petroleum and liquid fuels demand will average 100.3 million barrels per day (Mmbpd) in the first quarter of 2020, the Energy Information Administration projects in its February Short-Term Energy Outlook (STEO).

This demand level is 0.9 Mmbpd fewer than forecast in the January STEO and reflects both the effects of the coronavirus and warmer-than-normal January temperatures across much of the northern hemisphere, Kallanish Energy reports.

The February STEO’s global petroleum and liquid fuels supply forecast assumes Opec will reduce crude oil production by 0.5 Mmbpd from March through May because of lower expected global oil demand in early 2020.

This Opec reduction is in addition to the cuts announced at the group’s December 2019 meeting. EIA now forecasts Opec crude production will average 28.9 Mmbpd in 2020, 0.3 Mmbpd fewer than forecast in the January STEO.

In addition to these production cuts, EIA’s lower forecast Opec production reflects ongoing crude oil production outages in Libya during the first quarter. In general, EIA assumes Opec will limit production through all of 2020 and 2021 to target relatively balanced global oil markets.

Global liquid fuels inventories fell by roughly 0.1 Mmbpd in 2019, and EIA expects they will grow by 0.2 Mmbpd in 2020. Although EIA expects inventories to rise overall in 2020, EIA forecasts inventories will build by 0.6 Mmbpd in the first half of the year because of slow oil demand growth and strong non-Opec oil supply growth.

Firmer demand growth as the global economy strengthens and slower supply growth later in the year contribute to forecast inventory draws of 0.1 Mmbpd in the second half of 2020. EIA expects global liquid fuels inventories will decline by 0.2 Mmbpd in 2021.

Brent crude oil spot prices averaged $64 per barrel in January, down $4/Bbl from December. Brent prices fell steadily through January and into the first week of February, closing at less than $54/Bbl on Feb. 4, the lowest price since December 2018, reflecting market concerns about oil demand.

EIA forecasts the average Brent price will rise to an average $68/Bbl in 2021. 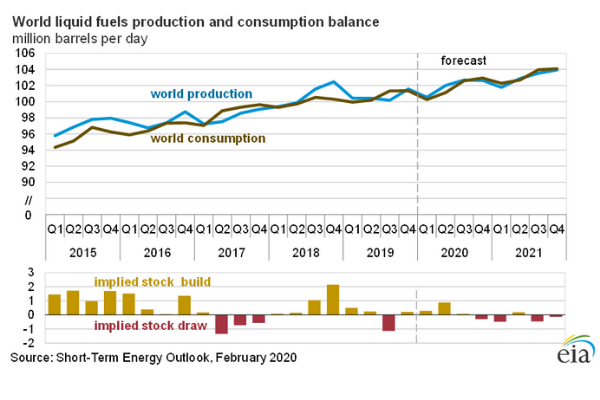