Most of those sales will be in North America and China where GM does most of its business, Kallanish Energy reports.

It also has a strong business in South America.

GM sold its European brands in 2017 and exited that market, the research firm said.

The European Union is the second-largest EV market in the world, representing 25% of global EV sales by 2026, WoodMac reported.

Without sales in Europe, GM would need to win 30% of the U.S. market and 16% of the Chinese market to achieve its target of 1 million annual EV sales by 2026, the report said.

Also, about 17% of GM’s current sales are pickup trucks, a segment not expected to electrify as quickly as passenger cars, it said.

GM’s target would entail the company capturing 12% of the global EV market by 2026, and that will be challenging especially with its absence from Europe, it said.

The company has moved from plug-in hybrids to battery electric vehicles, it said.

The company has agreed to a joint venture with LG Chem for a battery manufacturing plant in the United States. Each company will contribute half of the $2.3 billion investment for the plant. 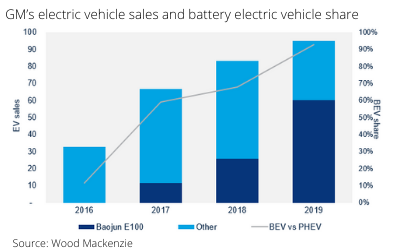