Brazilian electricity regulator Aneel has given the go-ahead for the start of commercial operations at the country’s first integrated LNG-to-power project, developer Golar Power said this week. 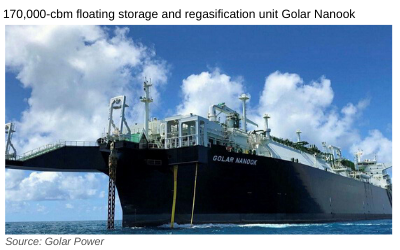 The plant is also the largest and most efficient thermal power station in Latin America. The project includes a dedicated LNG import and regasification terminal – the newbuild floating storage and regasification unit (FSRU) Golar Nanook.

The FSRU has capacity to supply over 21 million cubic meter per day of natural gas, promoting the use of liquefied natural gas to balance and diversify the energy mix.

“The power station will now start to deliver electricity to a pool of 26 power distribution companies across the country until December 2044,” said Golar LNG. The company owns 25% of the power station through its 50% stake in Golar Power.