Our energy debate and much of what passes for environmentalism today consists of green fibs and red lies told by special interest activists.

Moralists have debated the “white lie” for centuries. Is a lie ever justified? Well, certainly not if the person to whom we are speaking is entitled to the truth. Yet, lying is all around us. It is routinely used to pursue what liars suppose are just ends warranting deceitful means. We see this in spades among fractivists, global warmists and hysterical environmental doomsayers of all sorts. Green fibs and red lies abound, in fact.

What do I mean by green fibs? Well, yesterday’s earlier post by David Wojick provides an example with Dominion Energy’s plans to buy future capacity from other utilities, on the dubious theory it will be green, as a way to satisfy unrealistic green targets set by the Commonwealth’s politicians, for whom realism is never a necessity. It’s the simplest of all green fibs and only kicks the can down the road in hopes it will rust away before having to be picked up.

A recent example from New York, though, provides a more common illustration if the green fib.  It has to do with a new solar energy system being installed by the Maine-Endwell Central School District in Broome County, New York. The District brags about it online with a blaring all caps large font headline of “MAINE-ENDWELL GOES 100% SOLAR! DISTRICT ANNOUNCES SOLAR ENERGY PROJECT IS FULLY ACTIVE.” Really? Well, no. There are multiple green fibs involved, in fact.

Let’s start with the 100% claim. Does that mean solar energy energy is providing the heat and lights anytime you walk into one of the District’s buildings? No, not at all. Here’s a chart offered on the school website that projects typical energy versus solar energy production: 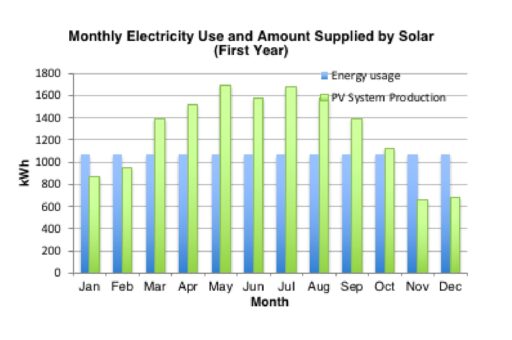 This chart shows a solar system such as just installed by the District will not provide enough energy from November through February. And, these are simply monthly figures. Hourly, there will many many more periods during all months when solar energy is not being produced. So, who provides the heat (or air conditioning) and lights then? What provides the power to light the football field at night, for example? This is the beginning of understanding if you want more than green fibs.

The answer, of course, is some other energy source, most likely natural gas if you live in Endwell, New York, where 84.1% of homes depend upon and many the rest rely upon electricity made with natural gas. No, the solar system won’t be doing the going when the going gets tough; that’ll be done by natural gas. Moreover, all that extra solar energy gathered when the going is easy and no one needs the juice, because it’s warm and stays light out until 9 PM, will be valueless or worse. It will, nonetheless, be force sold into the grid at regular prices forcing up the cost of electricity for all and making gas fueled power plants less economical, which means a double subsidy whammy on Upstate ratepayers.

These green fibs are quietly acknowledged by the District when it says things such as this (emphasis added):

Panels designed to meet 100% of a customer’s annual electricity load overproduce in the summer. The extra power is banked as credits ($) on your electricity account(s), and those credits roll over month-to-month until they can be used.

Sounds reasonable, doesn’t it? That is until you consider the fact something of no worth to you probably isn’t worth much to others either and the school is getting an artificial price at your expense. Such is the nature of this hidden subsidy, which is on top of other government subsidies amounting to 82% of capital costs and all of them are on top of the costs added to the gas fueled power plants that can’t be eliminated because their dispatchable is always necessary as a backup. The school solar project is unavoidably duplicative and cannot be anything but an additional cost on ratepayers in general although the District individually benefits.

Worse, the state loses in yet another way by heavily subsidizing the District. It is claimed the project pays for itself in less than 18 years without state aid but, a look at the numbers shows it’s all smoke and mirrors. The State kicks in some $6.9 million or 82% of the $7.3 million project cost so it can generate cumulative benefits net of state aid amounting to a negative $2.5 million after 18 years. Moreover, the net present value of the savings with state aid is still only $2.8 million, meaning the project is a huge money loser no matter how the data is crunched. Look at the tables at the link and see for yourself the green fibs in the form of red ink.

There’s more than red ink resulting from all these green fibs, though. Some morph into red lies and for an example of that, let’s return to the junky “Frackalachia” propaganda piece I noted was more about Heinz family politics than science. It turns out the report got another few seconds of fame with an article in Gizmodo, of all places. Written by Dharna Noor it repeats the same nonsense with claims such as this:

It’s clear that we need to stop natural gas production to avoid the worst effects of the climate crisis. But a new report from the Stockholm Environment Institute’s U.S. Center and the Ohio River Valley Institute shows that there’s another reason companies should stop extracting shale gas in the nation’s Appalachian region: Expanding drilling is not even likely to be profitable.

Starting an article in this fashion immediately reveals agenda, of course, so I investigated this further in the same manner; by tracing things back to the source. What I found is that Dharna Noor writes for a blog called Jacobin, named after the terrorists of the French Revolution. She is the author of a radical post there entitled “Socialism or Extinction” posing a false choice with the intent of convincing us to choose socialism. Read it to get a sense of how green fibs about subjects as seemingly innocuous as school solar projects are too often part of broader movements with extremist connections. Global warming is the excuse for replacing capitalism with a socialistic corporatism where the money is to be made by merging business and government into one global elitist enterprise.

Reading the Jacobin article we also learn still more about Dharna Noor with this:

Dharna Noor is a climate journalist and producer at the Real News Network.

A visit to the Real News Network confirms the red lies:

The Real News Network is a non-profit, viewer supported center for digital journalism, dedicated to telling the stories that matter to movements fighting back against capitalism, white supremacy, and imperialism.

And, who funds this attack on capitalism? Well, the sons and daughters of capitalists, of course; the spoiled trust-funders desperate to unload their guilt without giving up their social status. Take the Flora Family Foundation, for example, which is a long-time fractivist enabler:

The Flora Family Foundation was established in 1998 by the family of William R. Hewlett (co-founder of the Hewlett-Packard Company) and his wife Flora Lamson Hewlett.  The purpose of the Foundation is to promote the well-being of people everywhere by supporting selected activities of charitable organizations and institutions as determined by members of the Board and Family Council…

Another funder of the Real News Network is the Knight Foundation, also a fractivist enabler. The original source of the money in this case were the Knights of Knight-Ridder, the publishing magnates. The Knight Foundation, a private non-profit charity, that’s supposed to be doing zero lobbying, has $2.5 billion and funds fractivist initiatives in cooperation with the Heinz Endowments, which brings us back to Frackalachia. Indeed, when it’s not funding attacks on the capitalism that made itself possible, the Knight Foundation has been funding “green jobs” initiatives using the same sort of narrative behind the Maine-Endwell School District’s solar project. It’s always the same people telling the same green fibs and red lies, isn’t it?