Holyoke Mayor makes green splash to collect pander points with trendy Bay Staters, while betraying the very cause he espouses and denying others what he has.

Is there any public official left in Massachusetts without his head up you know where, who can stand on his own two feet and not feel he has to pander to every damned trendy cause that comes the pike? Apparently not, if Holyoke Mayor Alex Morse is any example. This fellow has a degree in urban studies, which is science for those without a clue of what’s happening beyond the city walls. Still, his latest move to come out against a pipeline when his residents are suffering under a moratorium, may rise to No. 1 on the stupid political tricks scale.

Before getting into the story a few facts about Holyoke are necessary to get the big picture.

First, Holyoke is a college town. Need we say more? Well, sadly, we do. It’s the home of Holyoke Community College which proudly declares itself a “green campus.” It tells us “From compostable utensils and cage-free eggs, to low-energy lighting and upgraded chillers, HCC is continually working toward reducing our carbon footprint and making choices that align with our values.” As if any of that mattered one whit to anyone but the self-righteous faculty wearing their oversized green belt buckles to announce their virtues.

Second, the Holyoke City Hall where the Mayor works is heated by natural gas, as one can see from this photo: 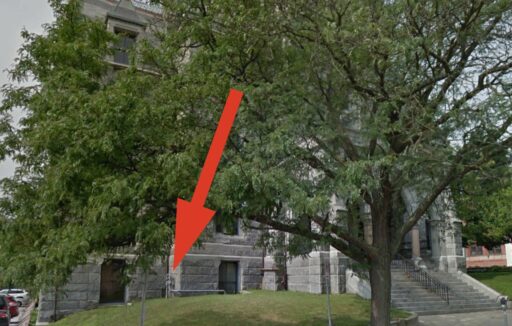 Third, the City of Holyoke could use some growth. It lost an estimated 694 households between 2009 and 2017, according to the Census. It also has a big income problem as the following chart indicates, a problem that can only be addressed with economic development more natural gas might help bring about: 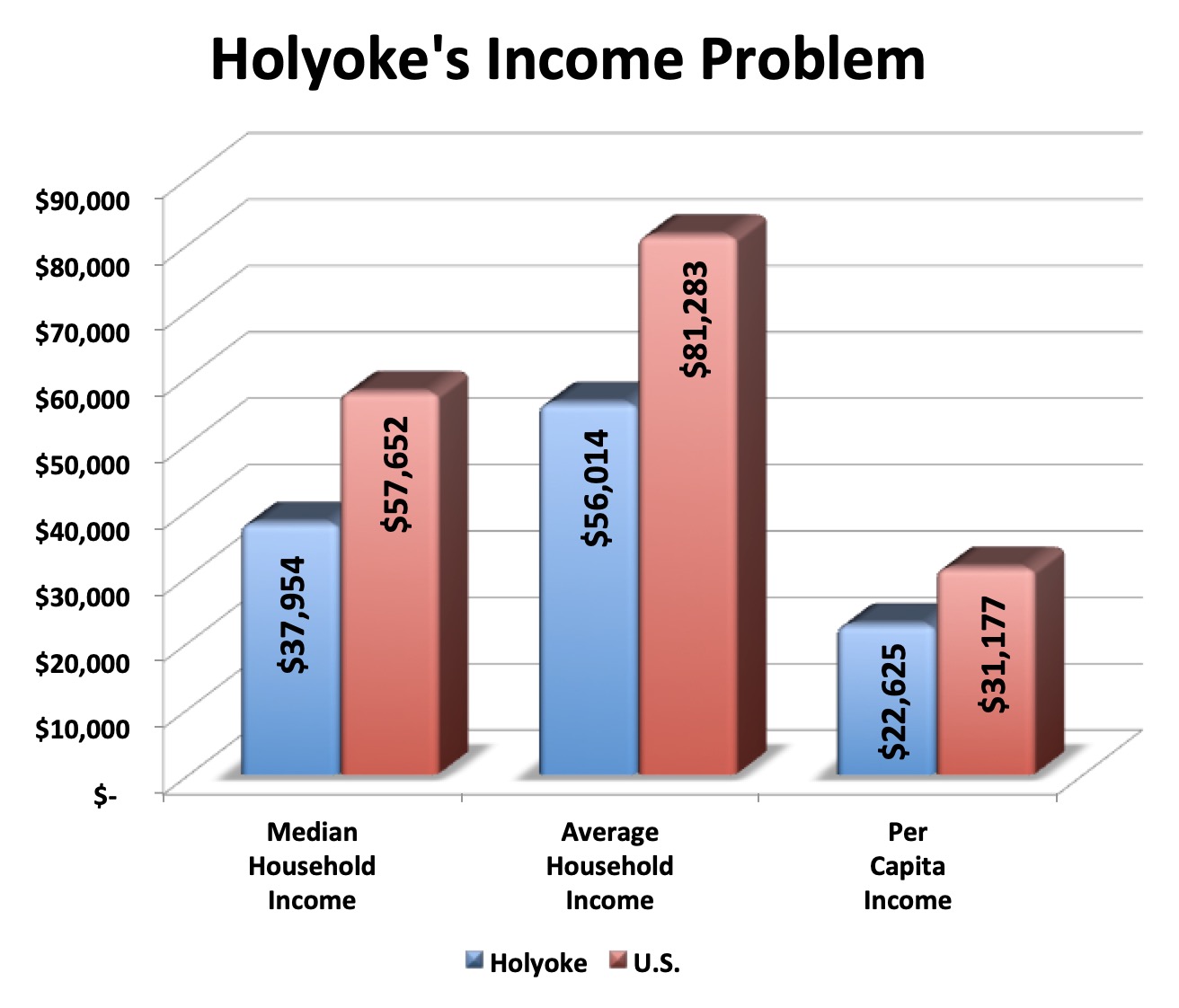 Fourth, Holyoke, since the shale revolution began and prices of natural gas dropped nationwide, has been able to convert a lot of homes from oil to natural gas heat or to electricity now mostly made with natural gas. Here’s what’s happened, in fact:

By converting oil heating systems to natural gas or electric (assuming the bulk of electricity is produced with gas), Holyoke residents have reduced CO2 emissions by easily 8.6 million pounds annually.

This brings us back to Holyoke Mayor Alex Morse, who pops up like a prairie dog to mouth meaningless slogans whenever a trendy tumbleweed blows by. Here’s the news, as reported by the Energy News Network (emphasis added):

A Massachusetts mayor is siding with safety and environmental groups in a pipeline debate that’s pitting climate fears against local economic concerns.

The city’s mayor, though, says that expansion should not be built. In mid-June, Mayor Alex Morse wrote to federal regulators asking them to deny the project because it would increase emissions and run counter to the city’s goal of meeting its energy needs with clean and renewable resources.

“Succumbing to pressures around the need for natural gas in the short-term, would not be a longer-term answer to the dangers we face,” Morse said…

Holyoke Gas & Electric, which also serves the neighboring town of Southampton, has a solid clean energy track record. The company has partnered with private firms to develop more than 17 megawatts of solar capacity in the city. Together, these projects generate power equivalent to the energy needed to power 17% of the city’s households, the utility estimates.

The largest of these projects is the Mt. Tom solar farm, a 5.8-megawatt development on the former site of a coal-burning power plant. In the fall, Mt. Tom also added a utility-scale battery storage system, the second such installation in the state.

As the utility has been building its renewable portfolio, however, natural gas supply constraints have been a growing problem. In January, the company announced a moratorium on future natural gas hook-ups.

“Over the last several years, HG&E’s load has grown significantly and is now operating at capacity during peak periods,” the company wrote in its official announcement. “While inexpensive natural gas has never been more plentiful in the United States, there is insufficient pipeline capacity in our region to deliver additional load.”

Even before the moratorium, Holyoke Gas & Electric had signed an agreement to support a project that would replace more than 2 miles of existing, smaller pipes with larger ones. The infrastructure would be built by Tennessee Gas Pipeline Co.; Holyoke Gas & Electric and Columbia Gas have agreed to purchase the additional supply the project would bring…

Morse made clear his intention to fight the plan in an Earth Day announcement, in which he wrote, “I cannot in good conscience support the building of this pipeline… We cannot break our addiction to fossil fuels by feeding the urge to consume more of them in the name of short-term extensions.”

Pipeline opponents argue that a better way forward is to address demand.

“They say this region is asking for more gas so they have to address it,” said Jacqueline Velez, a community organizer with Neighbor to Neighbor. “We’re trying to find a way to make sure it’s not needed.”

The money that would be spent on the pipeline could be invested in finding ways for local businesses and homes to use less gas, eliminating the need to boost supply. Morse has declared his intention to work with the utility to create programs that would help the biggest consumers use less gas and implement renewable energy. There are also plans to convene a working group that would draft specific policy recommendations for meeting the city’s energy needs without increasing the flow of natural gas. ..

Some supporters also theorize that stopping the pipeline could cause environmental and economic damage. The demand for fuel is not going away; without an increased supply of natural gas, they say, consumers will turn to options like oil that generate more carbon emissions than natural gas.

And the existing constraints are costing consumers money, Dodge noted. At times of high demand, prices for the limited supply of gas soar. Customers in New England end up paying some of the highest prices in the nation, even though wholesale prices for natural gas are currently some of the lowest ever.

In December, the average price of 1,000 cubic feet of natural gas for residential customers nationally was $9.63, according to the U.S. Energy Information Administration; in Massachusetts, it was $15.16, the fifth-highest in the country.

So, the Holyoke Mayor says the solution is to live with less, as he works from gas-heated offices and dreams up ways to appeal to trendy Massachusetts voters and clear a path to higher office. He’d rather flash his green belt-buckle than do anything meaningful, like grow the community and convert more of those oil furnaces to gas to reduce emissions. So what if more people are driven to use oil and emissions rise; he’s expressed his good intentions and that’s all that matters. So what if solar gimmicks can’t work and need natural gas as a backup; we have ours and everyone else will just have to do with less. So what if the costs of energy explode; we need to preen our green.