A Bob Howarth methane study has gotten some traction here and there amongst the uneducated empathetic press but key data falsifying it has been ignored.

We have some really knowledgeable readers here at NaturalGasNOW and one of them, who apparently read our Bob Howarth post the other day, sent me a very compelling analysis of fractivist Bob’s recent work. It dispenses with the Howarth methane study like a beachcomber tossing a pebble into the ocean for fun. It turns out out Bob had to be aware, when he concluded “shale-gas production in North America over the past decade may have contributed more than half of all of the increased emissions from fossil fuels globally,” that it almost certainly could not be true. 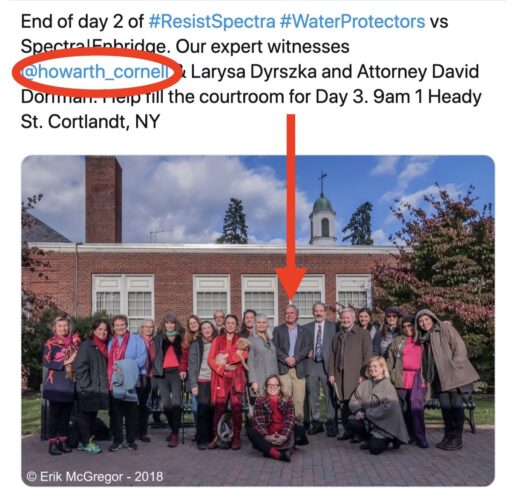 The analysis of the Howarth methane study may be found here and it is offered by a professional chemist by the name of Blair King from British Columbia. He has a PhD Chemistry and Environmental Studies and is a very writer to boot. I encourage everyone to read the whole post but here are the parts that matter most (emphasis added by both King and me):

This week I was directed to Dr. Howarth’s his latest work. This new article looks at the global increases in methane concentrations and concludes that:

Now let’s admit, that is a pretty interesting hypothesis. We know global methane concentrations have been increasing and we know that the US is extracting a lot more natural gas, these two must be related mustn’t they? As Dr. Howarth puts it:

Shale gas makes up 2/3rds of all new natural gas development over last decade. An emissions rate of 3.5% for full lifecycle (which should surprise no one) gives you about 10 Tg per year of new atmospheric methane. My paper is entirely consistent with this, giving me confidence…

The thing Dr. Howarth glosses over in his paper is that methane is a highly studied gas globally. We have satellites and ground stations that can detect methane signatures and our governments monitor methane concentrations in the atmosphere on an ongoing basis. We know a LOT about what is happening on this topic.

In the US, the National Oceanic and Atmospheric Administration maintains a Global Greenhouse Gas Reference Network that includes the Earth System Research Laboratory methane tracker. If releases from North American shale gas extraction were increasing, that should be evident in all the methane sampling and observations. Especially, if as suggested by Dr. Howarth, the North American shale gas extraction were responsible for one-third of the global increase in methane over the last decade.

As a scientist, I decided to go look at the data from the methane tracker and was surprised to see that there is no signal of massive increases in methane emissions that would be necessary to tip the global balance. The spike is simply not there…

In his paper Dr. Howarth refers back to an earlier paper A large increase in U.S. methane emissions over the past decade inferred from satellite data and surface observations by Turner et al., (2016) from which Dr. Howarth draws this information:

Since virtually all shale-gas development globally through 2015 occurred in North America (mostly in the United States but also western Canada), we conclude that at least 33 % of the increase in methane fluxes came from North America. This is consistent with the work of Turner et al. (2016), who used satellite data to conclude that 30 % to 60 % of the global increase in methane emissions between 2002 and 2014 came from the United States.

The U.S. has seen a 20% increase in oil and gas production [US EIA, 2015] and a ninefold increase in shale gas production from 2002 to 2014 (Figure 1, bottom), but the spatial pattern of the methane increase seen by GOSAT [Greenhouse Gases Observing Satellite] does not clearly point to these sources.

The Turner paper literally says that the satellite data they used did not see the methane increases in the vicinity of where the shale gas was being extracted. This is pretty darned important. If the increase in methane, is as large as Dr. Howarth indicates it should be (i.e. enough to significantly effect global numbers) this should be visible in the satellite data…and yet it isn’t…

Why would the Howarth methane study quote the Turner study to support his supposition but not address the spatial pattern data that directly undermines it? The answer is provided merely by asking; it didn’t fit the conclusion he wanted. Bob is a fractivist, the sort of fellow who saw no problem protesting the Spectra Algonquin Pipeline Expansion last year at the same time he was presumably assembling the Howarth methane study.

There’s also this to consider, forwarded by another astute reader:

All you need is a pair of hiking boots and a lighter to find out how the Eternal Flame Falls got its name.

At the heart of this waterfall is a small flickering flame that is caused by a natural gas pocket and hikers who pass by the falls and relight the gas pocket whenever it sputters out, keeping the flame in an eternal cycle. The eternal flames caused by natural gas pockets are common, but the imagery of a lone flame under torrents of water make Eternal Flame Falls unique. 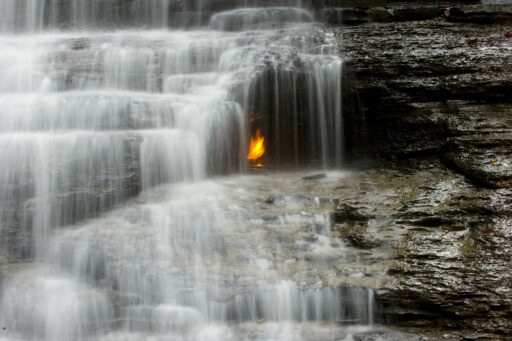 The imagery has inspired some active imaginations resulting in legends and sightings of elves in the area, and while those legends have obviously been disproved, the falls remains a mystery from a scientific perspective. The natural gas that eternal flame sites give off comes from a reaction caused by old and very hot shale rocks.

The falls, made out of relatively young shale, and as hot as a cup of tea, should be the last place you would expect an eternal flame. Yet, defying all scientific explanation, and the massive amounts of water around it, the flame burns on.

Perhaps this is the methane Bob Howarth should be investigating. Of course, it wouldn’t fit the template either, would it?