Hurricane CLCPA Will Do Massive Damage to the Empire State

New York’s Climate Leadership and Community Protection Act (CLCPA) establishes targets for decreasing greenhouse gas emissions, increasing renewable electricity production, and improving energy efficiency. The CLCPA was described as the most ambitious and comprehensive climate and clean energy legislation in the country when Cuomo signed the legislation but there is one massive [hurricane sized] flaw.  The lawmakers who enacted this law presumed that the transition of the state’s energy system could be implemented by political will so did not include feasibility conditions in the targets or schedules.  This post is a short description of one aspect of the many implementation problems of this law.

I have summarized the schedule, implementation components, and provide links to the legislation itself at CLCPA Summary Implementation Requirements.  I have written extensively in posts on implementation of the CLCPA because I  believe it will adversely affect affordability and reliability as well as create more environmental harm than good which affects my future as a New Yorker.  I have described the law in general, evaluated its feasibility, estimated costs, described supporting regulations, listed the scoping plan strategies, summarized some of the meetings and complained that its advocates constantly confuse weather and climate.  The opinions expressed in this post do not reflect the position of any of my previous employers or any other company I have been associated with, these comments are mine alone.

One of the targets of the CLCPA is to develop 9,000 MW of offshore wind by 2035.  This is considered necessary because off-shore wind has a higher resource availability.  Importantly this is just the start of what is accepted as a much larger offshore wind capacity that eventually will be needed for the ultimate goal of a net-zero emissions economy in New York in 2050.  For example, the Brattle Group analysis for the NYISO, New York’s Evolution to a Zero Emission Power System, estimates that 25,000 MW of offshore wind will be needed in 2040.  This article considers resiliency of the offshore wind capacity needed for the CLCPA.

Tony Heller writing at  Real Climate Science does an amazing job digging up newspaper accounts of past weather events like this description of the “Greatest Cataclysm in American History”.   In that article he uses newspaper archives and other contemporaneous accounts to describe the extreme weather on March 27, 1913 when there was widespread flooding in Indiana and Ohio, a massive tornado hit Omaha, NE, and tornadic storms ranged east into Pennsylvania.  One can only imagine the hysterical cries of climate change impacts if this situation were to repeat itself today.

I think that comparing the weather of the past to today is important to understand that natural variability causes most of the observed extreme weather observed.  Historical weather observations should also be used to evaluate plans for the future.  If we cannot plan for the past then we shouldn’t even try to plan for the future.  Heller recently described a 2014 report from the Swiss Reinsurance (Swiss Re) Company titled “The Big One, the East Coast’s USD 100 billion hurricane event” that is the impetus of this post.  In the report Swiss Re examines how the 1821 Norfolk and Long Island hurricane would impact the region today.

The Swiss Re report’s introduction describes the storm:

Nearly 200 years ago, a powerful hurricane decimated the Mid-Atlantic and Northeast United States. Packing wind gusts of over 156 miles per hour, the Norfolk Long Island Hurricane of 1821 surged up the Eastern Seaboard creating chaos and wreaking havoc from the Outer Banks of North Carolina all the way up to the Boston metropolitan area. If this hurricane was measured by today’s standards, it would be a strong Category 4 storm — unlike anything the Mid-Atlantic and Northeast have recently seen or experienced.

In comparison, Hurricane Sandy, with its unique track, 1,000-mile-wide wind field, and low central pressure, pushed record-breaking storm surge into the New York and New Jersey coasts, destroying businesses, homes, and lives in a short 24-hour period. But for all the devastation and damage that Hurricane Sandy brought, its intensity at landfall, measured by 1-minute maximum sustained winds, was equivalent to a weak Category 1 hurricane. Other events in recent years (Irene, Isabel, Gloria, and Bob), while significant, weakened prior to landfall, coming onshore as either Category 1 or Category 2 hurricanes, and not the major hurricanes originally anticipated and feared.

The report states that “If the 1821 Hurricane were to happen today, it would cause 50% more damage than Sandy and potentially cause more than $100 billion in property losses stemming from storm surge and wind damage.”  I had never heard of this storm but I knew about the “Great Hurricane of 1938” which decimated Long Island and New England leaving over 700 dead.  The question is how would a hurricane similar to these storms New York’s proposed offshore wind facilities.

The New York State Energy Research and Development Authority Offshore Wind Projects site describes the current status of the program to reach the 9,000 MW target by 2035.  As of early 2021 there are five offshore wind projects in active development.  The following figure from the website shows where the projects from the first two offshore wind procurements are located. 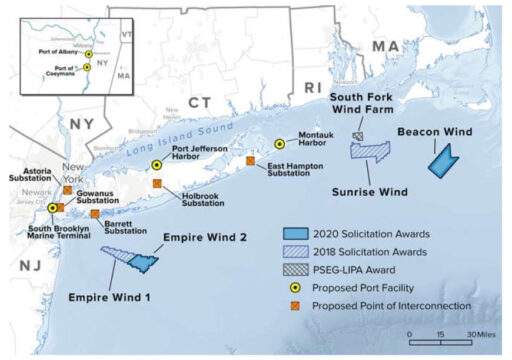 I wondered whether a storm with the same track as the 1821 and 1938 hurricanes would affect these locations. The Swiss Re report reconstructed the storm track and wind field for the 1821 hurricane: 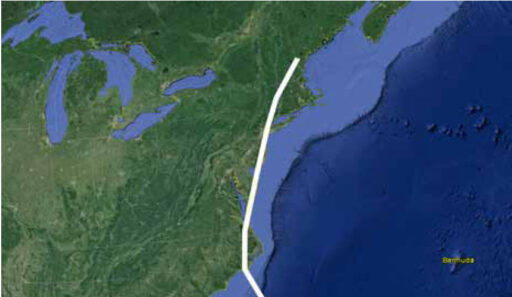 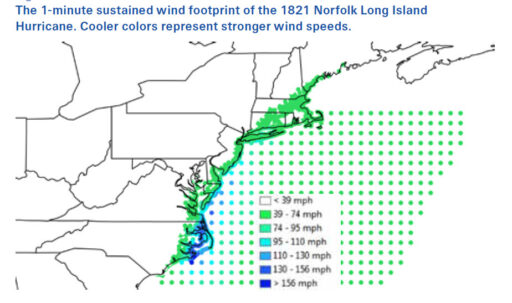 The New York City National Weather Service has a web page describing the Great Hurricane of 1938 that includes a wind field map developed by Dr. Isaac Ginis at the University of Rhode Island: 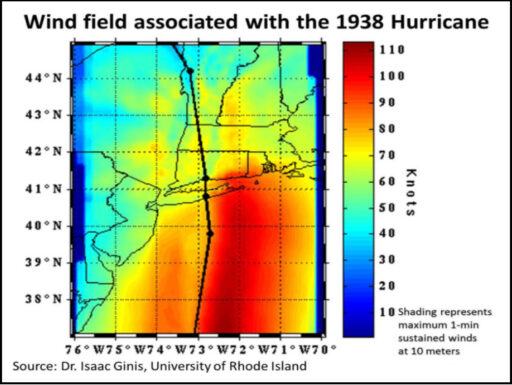 The answer to my question whether a storm similar to the 1821 and 1938 hurricanes would affect the five offshore wind projects is unequivocally yes.  The Forward of the Swiss Re report makes an important point regarding this threat:

It’s been two years since Hurricane Sandy reminded us that the Northeast United States is vulnerable to hurricanes, and for those still recovering from the storm’s aftermath, the trauma of the hurricane continues. Yet despite Sandy being the third largest hurricane loss on record, the majority of New York, New Jersey, and other Northeast residents did not experience how devastating a hurricane could be. For many of us Sandy is little more than a distant memory of a temporary inconvenience.

In the months following Sandy many experts told us that Hurricane Sandy was a very unusual event. It was unusual in terms of its westward storm track, its interaction with the jet stream, the high tide, and how it intermingled with the continental weather systems. They tell us that the probability of a similar storm taking the same perpendicular track as Sandy is at least one in 500 years.

Once in 500 years is misleading. Although Sandy was unusual in a meteorological sense, it wasn’t a particularly intense storm and lacked the widespread high winds and rainfall that can occur with a Northeast hurricane. It’s highly unlikely that we will see a hurricane with the same characteristics as Sandy. However it’s very likely (1 in 50 years) that we will see, and in fact, have seen, other hurricanes in the Northeast that would have caused economic damages equal to or greater than those caused by Hurricane Sandy if they were to occur today. Sandy is a harsh reminder of what greater event potentially awaits us.

The official story is that renewable energy like offshore wind will be more diversified and resilient than the current electrical system. Different types of fuels at existing power plants truly provide a redundant and flexible power system that can provide reliable electricity when needed.  In contrast wind and solar power which are utterly dependent upon the vagaries of weather cannot be called flexible and certainly are not dependable without additional energy storage and grid support services that markedly increase the cost.  The claim that wind and solar are less prone to massive outages is absurd given that every night with calm winds causes an outage of both of these generating resources.

Unfortunately, resiliency in the event of extreme weather is an even bigger problem. There is no question that a hurricane with stronger winds than Sandy will go through the area where New York is developing offshore wind.  The fact that two hurricanes with winds well over 100 mph have passed over New York’s offshore wind development areas should be a major concern.  I worry that New York will invest billions in these resources, get to a point where they are necessary for reliability only to see one storm come through and knock out the resource for an extended period.