Earthquake activity in Oklahoma declined for the third straight year in 2018 even as oil and natural gas development increased in the area, according to the latest data from the U.S. Geological Survey.

As EID’s updated infographic shows, seismic activity decreased by a whopping 83 percent – falling from a peak of 887 earthquakes in 2015 to 154 in 2018 – at the same time that oil production and rig counts grew by 20 percent and 13 percent, respectively. 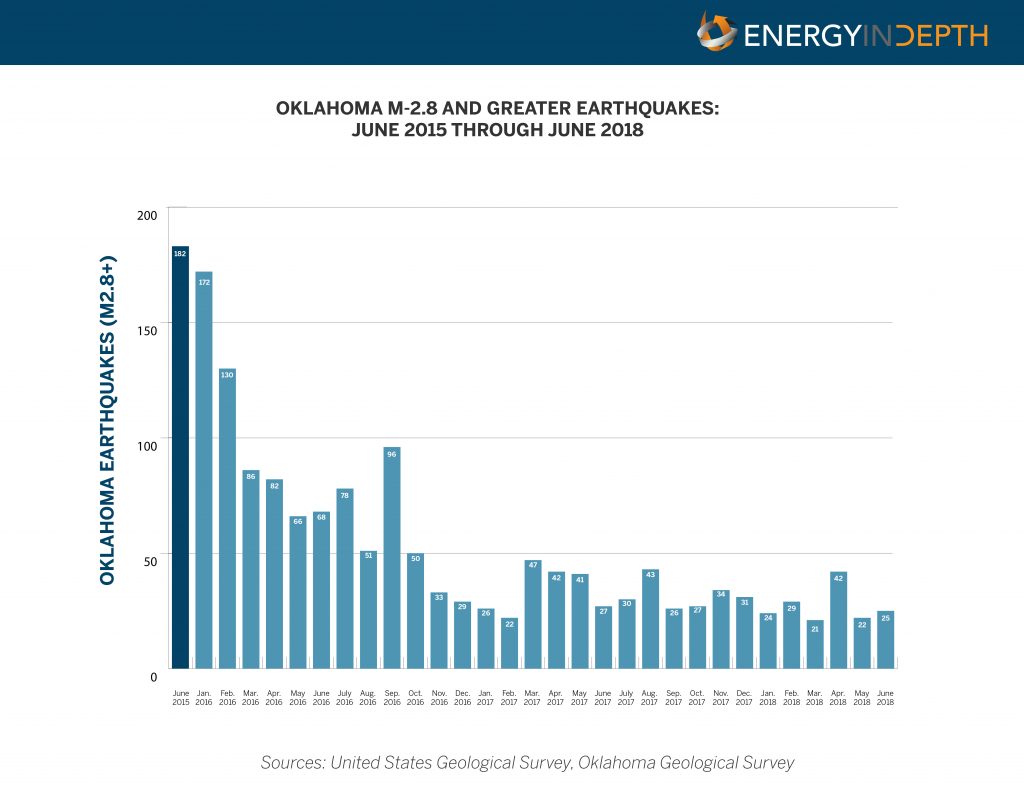 How can seismic activity decline when production is increasing?

Oklahoma’s increase in seismic activity has been identified as being the result of increased fluid injection via disposal wells into the state’s Arbuckle Formation. As the USGS has emphasized repeatedly,

“Fracking is NOT causing most of the induced earthquakes. Wastewater disposal is the primary cause of the recent increase in earthquakes in the central United States.” (emphasis added)

The decline in seismic activity has been largely attributed to the collaborative efforts between Oklahoma’s oil and natural gas industry, state regulators, academics, and other organizations that identified the issues with the state’s injection wells near the Arbuckle and developed realistic solutions to address it. As the OU Daily reported:

“Jacob Walter, Oklahoma seismologist and head of the Oklahoma Geological Survey, said specifically the shutdown and reduced volume of injections into Arbuckle disposal wells has led to the decline in earthquakes.” (emphasis added)

Importantly, researchers predict that this trend of declining seismic activity will continue.

A September 2018 Stanford University study predicted that “even without additional injection rate reductions” Oklahoma and southern Kansas will see “a further decrease of the seismic hazard in 2018, 2019 and 2020.” The study goes on to note that the research “underlines the effectiveness of injection rate reductions, which slow down the rate of pressure increase at seismogenic depth.”

Previously, this same research team accurately forecasted a 58 percent decrease in M-3.0-or-greater earthquakes from 2016 levels in 2017.

Oklahoma is a prime example of how collaborative efforts to take a science-based approach to understanding an issue can result in realistic and effective solutions. The state has been able to work alongside industry to greatly diminish these seismic activities without shutting down an industry that provided more than $225 million for education in 2018. As OIPA-OKOGA, the state’s oil and gas association, explains on its website:

“OIPA-OKOGA has worked closely with state regulators to address the issue head-on, and continues to take active steps to provide transparent, real-time data with researchers that will help protect the public while ensuring responsible production of our state’s natural resources.”