The WuFlu has made a lot of folks reevaluate mass transit and city life in general. We have been pushing people too close together and they realize it.

As lockdowns ease and parts of the world reopen for business, driving has emerged as the social-distancing transportation mode of choice. Oil demand is rebounding in China, Europe, and the United States as residents are driving rather than using mass transit over fears of the coronavirus. In China, oil demand dropped by about 20 percent when the country went into lockdown in February, but consumption of gasoline and diesel has recovered as factories reopen and commuters drive rather than use public transport.

In the United States, demand in the last week of April rebounded 22 percent from the lowest overall week of gasoline demand in April (April 5 to April 11). In Berlin, Germany—one of the first European cities to relax its lockdown—public transit use is down 61 percent while the number of people driving has increased to 28 percent below normal. In Madrid, Spain, public transport is down 87 percent, while driving is 68 percent below normal levels—up from about 80 percent in April. 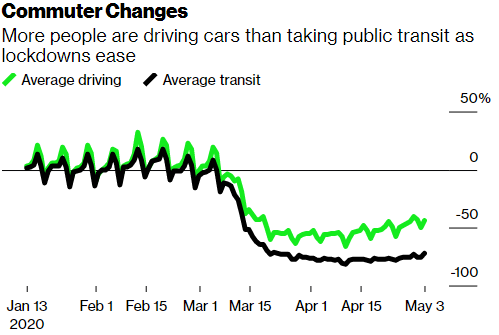 Chinese cities are already seeing traffic jams on a par with pre-coronavirus times. On the streets of Beijing, Shanghai, and Guangzhou, morning traffic is now higher than 2019 averages while subway use is well below normal. Volume on Beijing’s metro system is 53 percent below pre-virus levels. Subway usage in Shanghai and Guangzhou is down 29 percent and 39 percent, respectively. During the five-day Labor Day holiday in May, car trips in Beijing increased 15 percent over the first four days of the holiday, while trips by plane and train in and out of the city fell 76 percent and 86 percent, respectively.

The country’s independent refiners, known as teapots, are processing crude at a record of nearly 75 percent of their capacity, much higher than 60 percent a year ago. The teapots have a combined refining capacity of about 4 million barrels a day, making up a quarter of China’s total. Sinopec, the state-owned and largest refiner in the country with about 5.8 million barrels a day of capacity, is also increasing the amount of crude it is processing. As a result, China’s crude oil imports in April increased to 9.84 million barrels per day.

In the United States, gasoline consumption is coming back from record lows, increasing by 400,000 barrels a day during the week ended May 1. In Florida cities, fuel sales have rebounded to 30 percent below normal levels, from 50 percent weeks ago. Changes are being made to the way people vacation, which can also help gasoline’s recovery.  Demand for long-haul recreational vehicles has picked up as people opt for road trips over air travel. Bookings in some areas have more than doubled compared with last year.

Fuel demand typically increases throughout the months of March and April as more Americans drive due to the warmer weather. Year-over-year benchmarked fuel demand shows that the coronavirus influenced a peak drop in demand of 41 percent the week of March 29 compared to the same week last year. Despite April fuel demand being down significantly compared to pre-coronavirus levels, gasoline gallons purchased in the last three weeks of the month indicate that benchmarked demand moved closer to 2019’s seasonal rise—down only 31 percent from last year. 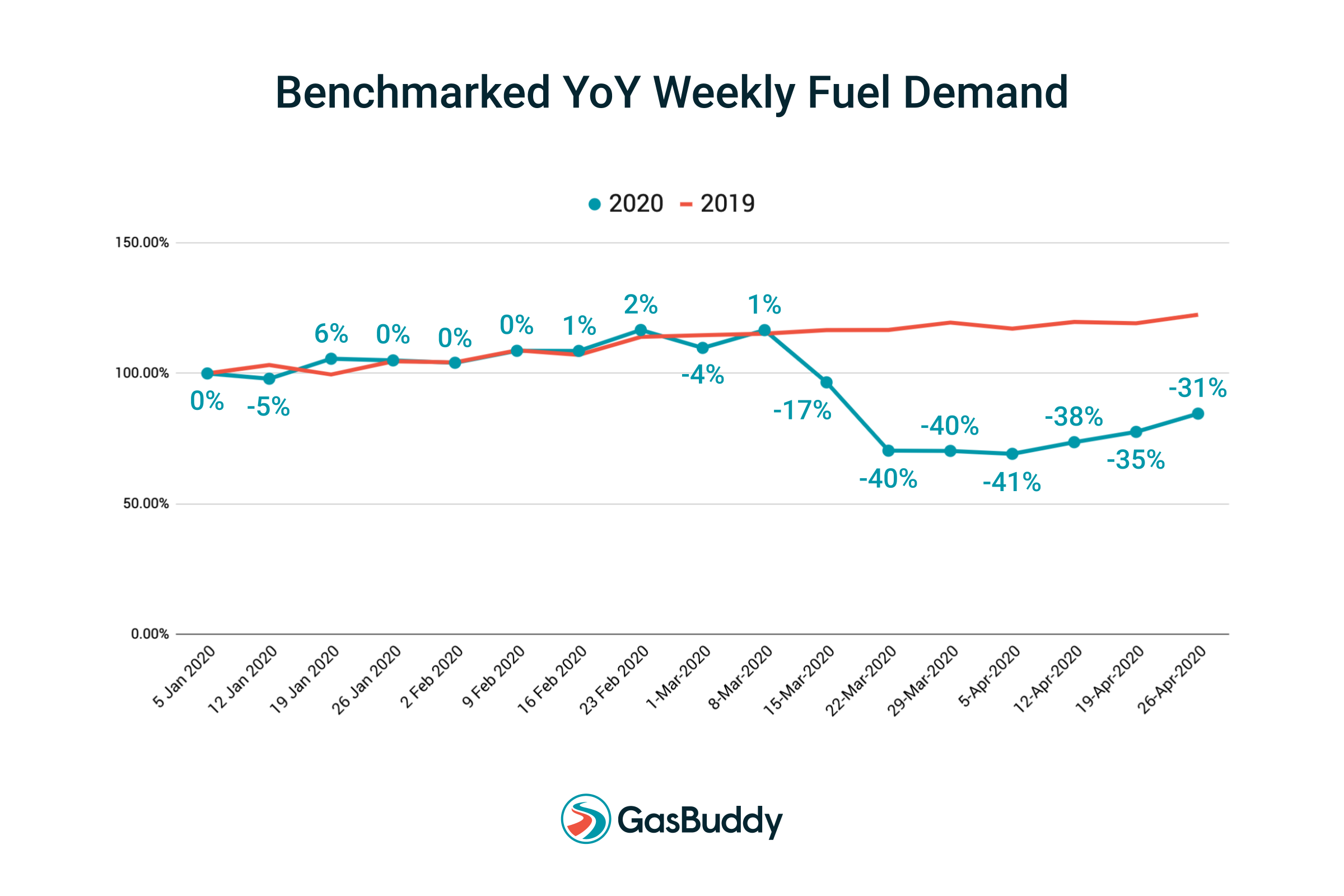 As states continue to reopen and employees return to work, it is likely that oil demand could increase throughout the summer. According to GasBuddy’s 2020 Summer Travel Study, 31 percent of Americans are planning to take at least one road trip this summer—down 44 percent from last summer, 18 percent are not planning on taking a road trip, and 51 percent are undecided.  The study, however, indicates that Americans are taking a “wait-and-see” approach, and that travel may pick up later in the summer.

Largely due to the coronavirus crisis, German railway service Deutsche Bahn has an 11-billion-euro hole in its budget. Despite train cars being largely empty, Germany’s federal transport ministry instructed the company to operate around 75 percent of its long-distance trains. The situation has left the company with an expected loss of between 11 and 13 billion euros by 2024.

Due to the coronavirus pandemic, people around the world are feeling more comfortable driving to work than using mass transit. That should help gasoline and diesel demand rebound to pre-coronavirus levels soon, particularly if China is any indication of the future trend.

Editor’s Note: This is pretty fascinating information. Members of my planning profession and politically correct public policy makers have been trying to push people together and onto mass transit for decades now. Very dense urban communities have served as a sort of utopian nirvana among those who would decide how others should live, while they seek to preserve the countryside for their own pleasures. We’re now seeing the downside of this foolishness. Every type of living, from Montana wilderness to Manhattan wildness has its advantages and disadvantages, but people, left to their own choices, generally choose wisely for themselves and attempts to force us into tiny spaces have proven to have huge unintended consequences.

The truth is that this country is big enough for all of us to live as we wish and the freedom of the automobile, and now the digital world I might add, allows for this. This means we should also stop telling others how to obtain their food and energy. Rural America knows how to do both and we can supply both city and country if you urban politicians will get your grubby hands off us and just let us do it. Moreover, we’ll keep you warm, make your electricity and clean your air with natural gas. So stop preaching how we all should live like you, coughing in each other’s faces on mass transit, and let us get to work so we can all live as we wish.