Natural gas is rockin’ it compared to renewables according to the latest data. Forget the capacity bragging; this is the reality of natural gas use in the US.

Yet another report from the Energy Information Administration establishes the absolute victory of natural gas over other energy sources thanks to the shale revolution. Natural gas use was up again in 2019 to its highest level ever. It brings to mind Chuck Berry’s well known lines from a song later made famous once more by the Beatles:

Roll over Beethoven
They rockin’ in two by two

I must admit, though, I had some slightly different lyrics in mind as I read the piece:

Roll over green scammers
Gas rockin’ in two by two 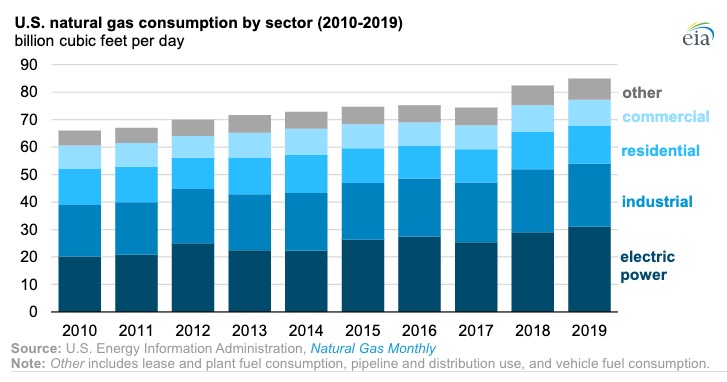 Here’s what the EIA had to say:

U.S. natural gas consumption grew in the electric power sector by 2.0 Bcf/d, or 7%, but remained relatively flat in the commercial, residential, and industrial sectors. Exports by pipeline to Mexico and as liquefied natural gas (LNG) grew by 0.5 Bcf/d and 2.0 Bcf/d, respectively. In 2019, the electric power sector consumed 31.0 Bcf/d, or 36%, of total domestic U.S. natural gas consumption. Natural gas-fired electric capacity additions grew in 2019, especially in the PJM Interconnection, which serves the U.S. mid-Atlantic region. Natural gas consumption has a smaller peak in the summer when demand for air conditioning, and therefore electricity, is greatest. In the summer of 2019, relatively high temperatures increased electricity usage and natural gas consumption. The United States set a monthly record for U.S. electric power sector consumption of 41.1 Bcf/d in July 2019, then surpassed that level to reach 41.6 Bcf/d in August. The electric power sector has been shifting toward natural gas in the past decade because of competitive natural gas prices and power plant technology improvements.

The second chart developed by the EIA shows how little impact solar and wind have compared to natural gas, which absolutely dominates. End of story! Gas is still rockin’ in two by two; just like US crude oil production.