“Christmas has come early for the renewable energy lobby, as Congress has once again reached into taxpayers’ wallets to generously subsidize wind, solar, and biofuel producers. Particularly shameful is the year-long extension of the production tax credit for onshore wind, which the industry had promised to phase-out but continues to go back on their word. On the one hand, the wind industry constantly claims they are now the lowest cost option for electricity generation, and on the other, they continue to spend millions lobbying Congress to send them billions in taxpayer subsidies. If wind is such a good deal for electricity generation, why does the industry keep coming back to Congress with their hand out?”

“It is a disgrace how Congress operates these days. Both parties do nothing all year long except trade insults and then, in a lame duck session, they leap into bipartisan action by slipping a laundry list of special interest giveaways for their friends on K Street into a year-end must pass bill to fund the federal budget. This year’s winter windfall might be good for wind, solar, biofuels, and an already bloated federal energy bureaucracy, but it is bad for the rest of us.”

Amen! The corruption in Congress is worse than ever!

The privately-held Olympus Energy — the 10th-largest natural gas producer in southwestern Pennsylvania, according to the 2020 Pittsburgh Business Times Book of Lists — completed the Midas 6M with a lateral length of 20,060 feet. That’s a record in the Marcellus Shale among completed and producing wells, according to Olympus Energy and Pennsylvania Department of Environmental Protection data.

That’s about 4 miles across.

Lateral lengths are the distance that wells travel horizontally after reaching its depth, allowing wells to become more productive by covering more natural gas reservoirs. Lateral length has jumped in the Marcellus Shale has developed, jumping from 4,649 feet in 2011 to 8,628 in 2017, according to the U.S. Energy Information Administration. That average was about 9,000 feet in 2019, depending on conditions and geology, although a number of drillers regularly pass 15,000 feet laterals.

But that’s usually for companies that have been working the Marcellus Shale for a decade or more, said Tim Dugan, a veteran drilling executive who this year became CEO of Olympus Energy.

“This is our 12th well,” said Dugan. “That’s one of the things that makes this a significant accomplishment.”

Lateral lengths aren’t done just for something to do. Mike Wahl, Olympus’ COO, said the company has spent years planning and preparing for the Midas 6M well in addition to the other wells that have been drilled to make 14 total wells drilled so far. Two other wells at the Midas pad in Plum Borough are over 15,000 feet each. Looking at it another way, the Midas 6M single well takes the place of what would have been at least three wells drilled in the earlier part of the Marcellus Shale development. That’s one well drilled instead of three.

“The amount of surface disturbance is reduced dramatically,” Wahl said. It also takes a lot of trucks off the road and has lower air emissions, Dugan said. Olympus also drew water from a nearby river, reducing the need for many water trucks on the road.

That bolded part is why natural gas development is one of the most effective preservers of open space there is; it allows landowners to retrieve maximum economic value with minimal environnmental impact.

There Are None So Blind…

Facts are stubborn things, except in New York, apparently:

New York City will soon be home to the world’s biggest utility-scale battery system, designed to back up its growing reliance on intermittent renewables. At 400 MWh this batch of batteries will be more than triple the 129 MWh world leader in Australia.

The City of New York’s director of sustainability (I am not making this title up), Mark Chambers, is ecstatic, bragging: “Expanding battery storage is a critical part of how we advance momentum to confront the climate emergency while meeting the energy needs of all New Yorkers. Today’s announcement demonstrates how we can deliver this need at significant scale.” (Emphasis added)

In reality the scale here is incredibly insignificant.

In the same nonsensical way, Tim Cawley, the president of Con Edison, New York’s power utility, gushes thus: “Utility scale battery storage will play a vital role in New York’s clean energy future, especially in New York City where it will help to maximize the benefit of the wind power being developed offshore.”

This puts the Con in Con Edison.

Here is the reality when it comes to the scale needed to reliably back up intermittent renewables. For simplicity let us suppose New York City is 100% wind powered. Including solar in the generating mix makes it more complicated but does not change the unhappy outcome very much.

NYC presently peaks at around 32,000 MW needed to keep the lights on. If Mr. Biden makes all the cars and trucks electric it might be closer to 50,000 MW but let’s stick to reality. 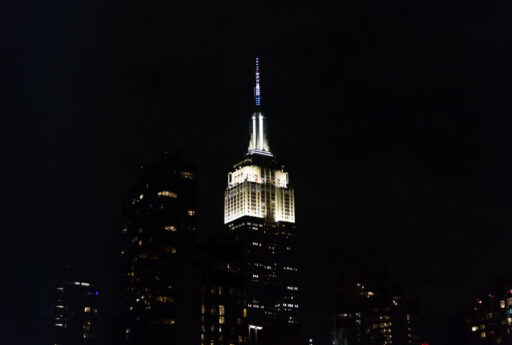 This peak occurs during summer heat waves which are caused by stagnant high pressure systems called Bermuda highs. These highs often last for a week and because they are stagnant there is no wind power generation. Wind turbines require something like sustained winds of 10 mph to move the blades and more like a whistling 30 mph to generate full power. During a Bermuda high folks are happy to get the occasional 5 mph breeze. These huge highs cover many states so it is not like we can get the juice from next door.

So for reliability we need, say, seven days of backup, which is 168 hours. Here’s the math:

It is easy to see that a trivial 400 MWh is not “significant scale.” It is infinitesimal scale. Nothing. Nada. Might as well not exist.

On the other hand, this measly 400 MWh battery array may well cost half a billion dollars, which is significant, especially to the New Yorkers who will pay for it. No cost figures are given because the system is privately owned, but EIA reports that the average utility scale battery system runs around $1.5 million a MWh of storage capacity. That works out to $600 million for this insignificant toy.

So what would it cost to reliably back up wind power, at this MWh cost and NYC’s scale? Just over $8,000,000,000,000 or EIGHT TRILLION DOLLARS. I have not seen this stupendous sum mentioned in the media. Perhaps Con Ed has not mentioned it.