I’m no fan of Newsweek and never was, even before it sold for $1.00 or so. I am a fan of Joel Kotkin, who is a talented observer of what’s happening economically and environmentally in this country. He hit a home run with a Newsweek article exposing the green war on blue collar jobs:

John Kerry, President Joe Biden‘s new climate czar, took a private jet to accept an environmental award in Iceland in 2019. “It’s the only choice for somebody like me, who is traveling the world to win this battle,” he unironically told a reporter when asked about it.

If this sounds like a clueless joke, it’s not. President Biden’s chief environmental officer took the least carbon-efficient means of travel known to man because it was “the only choice” he could think of for a member in good standing of the indulged upper classes.

But this is no anomaly when it comes to liberal climate activism; it is a perfect encapsulation of what it has become: a vanity project of the jet set that directly harms working-class interests. And it’s this green agenda that directly threatens the working class that Biden has prioritized as he has taken command of the federal government. 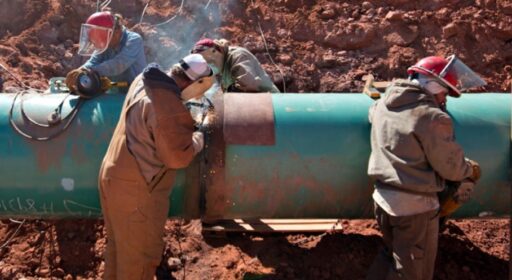 The first victims of this agenda include the upwards of 10,000 people, many of them union members, who expected to work on the now cancelled Keystone XL Pipeline. But this draconian climate agenda that cost so many jobs should not have come as a surprise. As a Rasmussen Reports poll found, most Americans—52 percent—predicted that Biden’s decision to re-join the Paris Climate Agreement “will cost American jobs and force households and small business to pay higher utility bills.”

Regions from the Appalachians to the Rockies could experience massive job losses, particularly if Biden embraces the green demand to ban all fracking, even on private land. In Texas alone, as many as a million good-paying jobs would be lost. Overall, according to a Chamber of Commerce report, a full national fracking ban would cost 14 million jobs, far more than the eight million lost in the Great Recession. That could turn even vital smaller towns into instant slums. And in places like New Mexico, where spending on public programs hinges on the oil industry—now experiencing a 60-day moratorium on new permits, thanks to President Biden—even issues like education will be impacted.

Yes, indeed. Green energy is, far too often, an elitist cause. Thank goodness some folks of influence are starting to notice.

None of this comports with green political correctness, of course, but natural gas supplies matter…

As a ‘deep chill’ from a polar vortex split spills into much of the central US, spot natural gas and electricity prices are spiking quicker than Robinhood pajama traders pumping penny stocks, low-float biotechs, and, of course, GameStop and other meme stocks in recent weeks.

The week’s biggest story is the plunge in temperatures across the Great Plains from Canada to Texas, resulting in skyrocketing demand for natgas and electric markets as tens of millions of Americans crank up their thermostats to stay warm… 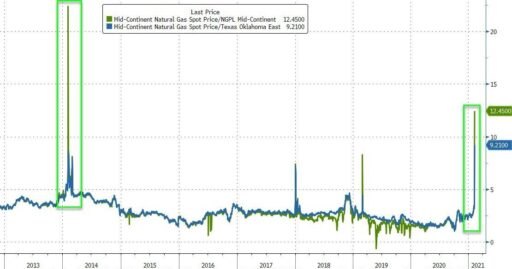 About a month before all this chaos in the central US, the polar vortex split was dumping Arctic air into Asia and Europe, it was then when Goldman Sachs flipped its thesis on natgas, telling clients how it has gone from “bearish” to now “bullish” on the commodity.

Notably, this surge in NatGas prices has serious knock-on consequences, as it is a major input to the electricity power generation system.

As Genscape data shows, the Electric Reliability Council of Texas saw power demand for electricity usage jump on Thursday as millions in the state are experiencing fridge temperatures.

The average spot price for electricity in North Texas soared 738% to $289.40 a megawatt-hour on Thursday afternoon after spiking to $1,900 earlier in the day.

The Dictatorship of Woke Capital

Aside from China, an issue to which it is related, this is the greatest threat facing our republic, our free speech and our liberty and it’s being perpetrated by our odious American oligarchy:

On Jan. 26, Larry Fink, the CEO of BlackRock Inc., the largest asset management firm on the planet, sent his annual letter to the CEOs of the businesses in BlackRock’s orbit — which, for all practical purposes, is all of the businesses traded on the American stock exchanges and beyond. In his letter, Fink reiterated his firm’s dedication to “sustainability” — usually represented by a company’s efforts to implement a “net-zero” carbon-dioxide emissions plan. He also detailed the measures by which he and his firm will evaluate companies’ dedication to what is essentially his personal political position.

Given that the other two passive-investment giants — State Street and Vanguard — have also endorsed sustainability as a guiding virtue, the “Big Three,” as they’re known, are now aligned on corporate strategy and can, in effect, impose their will on any major corporation that dares to question the efficacy of their environmental preoccupations. Do as we say . . . or else! 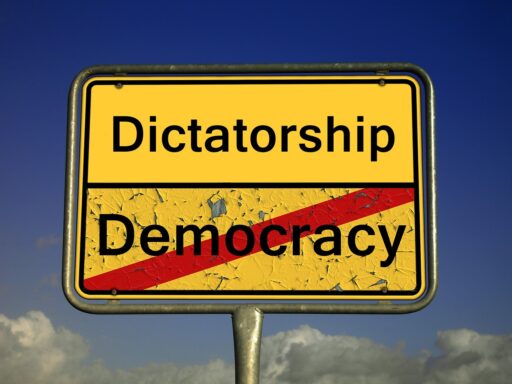 In short, Larry Fink and his allies have created a de facto extra-governmental regulatory regime, which will function as a private-sector constraint on the will of the American people. (Although Americans are increasingly worried about climate change, public opinion surveys showed that roughly twice the number of voters said the economy — i.e., the primary function of American business — was a very important issue to them than said the same about climate change.)

For decades, Democrats and the media labeled the GOP the “party of Big Business.” This was never true in the first place, but even if it were, the opposite is the case today. On Wall Street, in Silicon Valley, and indeed throughout the country, big businesses have unofficially declared war on free and fair capital markets, free and fair commerce, and free and fair political expression. This is the Dictatorship of Woke Capital.

Davd Ismay, who recently resigned in disgrace from being the Bay State’s “climate czar,” is yet another example of our American oligarchy at work. He was enabled by it and served it during during his brief assignment within state government. We now have a full-blown plutocracy in America and it must be resisted.