The usual suspect gentry class funders who finance other fractivist activity (including house organs such as WHYY, which reports this) are spending big bucks again, this time on trying to turn Pennsylvania blue/green so it can be more like other failed states such as neighboring New York:

“In many cases, these are people running against incumbents with terrible environmental voting records,” he said. “These are opponents of clean water and clean air.”

McNeil bills the investment as the largest state electoral campaign by an environmental group in Pennsylvania history. Donations are being channeled into a Super PAC called the Conservation Voters of Pennsylvania Victory Fund.

And here’s all you need to know about Conservation Voters of PA from their own website: 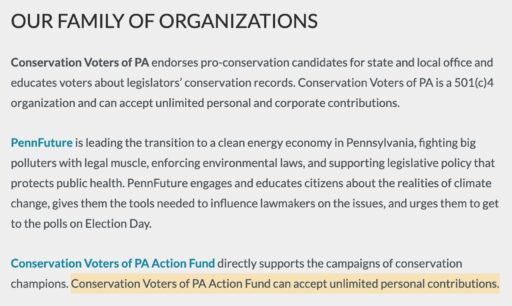 Yes, they’re part of the same gentry class family as PennFuture, which is a project of the Heinz family and the Haas family (William Penn Foundation), the same as WHYY, StateImpactPA, the Clean Air Council and the Delaware PovertyKeeper—shills all—and their political spending is unlimited. Let that sink in a moment. Two families want to turn Pennsylvania inside out to end fracking and halt pipelines, they have the money and they are spending it. It’s attempted rule by oligarchy.

This story speaks volumes about the economic stupidity of solar energy. And, this is before considering the huge additional costs associated with subsidizing solar (and wind):

The story focuses on the fact solar generates higher revenues because it generally supplies electricity at times of peak demand and in places where prices are higher, but that’s the point; solar is an expensive solution compared to natural gas, which can be made on a moment’s notice. Solar projects merely steal revenue, while the system still needs gas, and, therefore, force up the cost of all electricity. It makes zero sense. It’s all about virtue signaling and grabbing government rent.

Natural Gas Getting Better All the Time

This new report from the Department of Energy includes a nice perspective on how natural gas development has improved over the last two decades and why it’s so important to Rural America; because it supplies so much of our energy so economically with so many benefits to the environment and ever decreasing impacts on it:

The combination of hydraulic stimulation and horizontal drilling, while enabling the dramatic increase in production of oil and natural gas from shale and other unconventional formations, also has contributed to increased efficiency and resulted in smaller areal footprint per well drilled from drilling location development. For example, what took 64 well pads with 64 vertical wells to access four square miles (40 acres per well) in the early 2000s now can be accessed from a single (slightly larger) well pad with 16 long lateral horizontal wells (see Figure 21). 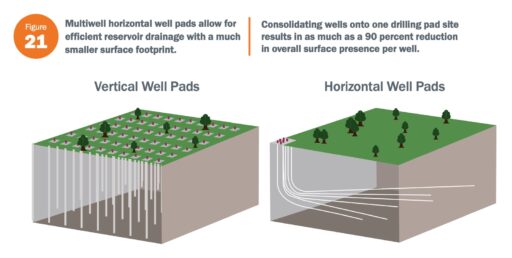 Consolidating wells onto one drilling pad site results in as much as a 90 percent reduction in overall surface presence per well as well as allows for a concurrent reduction in the number of access roads and gathering pipelines needed to service dozens of wells, further reducing the environmental footprint per unit volume of oil or gas produced.

These few words explain why natural gas development is so valuable in sustaining rural character and the families of those who live on our farms and own our forests; because no other form of economic development does so much with so few impacts. It’s a beautiful thing, just like Tiramisu!