Natural Gas Revolution Has Been A Decade of Continual Progress

George Stark talks about a natural gas revolution that has taken place over the last decade plus and a Think About Energy event he facilitated.

In a virtual Think About Energy conference held on Aug. 26, panelists who have witnessed first-hand the evolution of natural gas production in Pennsylvania since 2007 stressed the importance of continuously educating legislators and the public on the tremendous progress made since then. It’s important that we take stock of where we’ve been and apply it to the future.

“It seems like yesterday, but a lot has changed in the industry from a regulatory perspective and an environmental perspective,” said Patrick Henderson, current director of Regulatory Affairs for the Marcellus Shale Commission (MSC). Those who were not part of the process of developing the state’s first official energy plan in 30 years “aren’t familiar with and weren’t responsible for some of the battles and the accomplishments that we can point to 12 years ago. They weren’t part of that conversation.”

Panelists credited industry leaders like Cabot Oil & Gas Corporation for working closely with state and federal agencies to achieve best management practices, advanced technologies, increased transparency, and environmental excellence. But newly-elected legislators and even those more recently employed in Pennsylvania’s gas fields are often unaware of how much has been done. 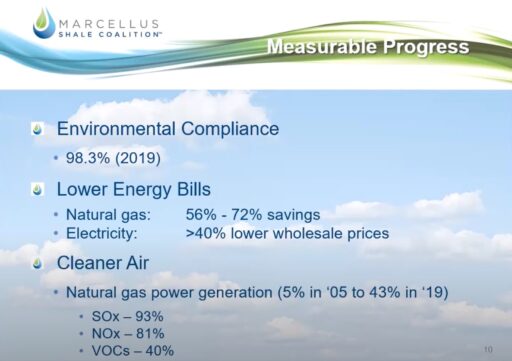 “We can all get complacent and think that everybody understands shale development,” said Kathryn Klaber, former head of the MSC, concurred. “A lot of what we needed to do was cutting edge in areas that had a unique geology and population. The scale of what we had to cover was unique.”

Joseph Reinhart, co-chairman of the Energy and Natural Resources Group of Babst Calland Law Offices, provided details for us on the comprehensive environmental laws, starting with the Oil & Gas Act (Act 13) and followed by a half dozen monumental new pieces of regulatory legislation that provided new guidelines for those of us in the gas industry. Additionally, he noted that we now work regularly with Pennsylvania DEP and DCNR, as well as multiple river commissions and a host of federal agencies.

“There was not much interaction between these agencies back then,” Joe remarked. “Now gas companies deal with all of them.”

“They were committed to doing it right for the people in their communities,” Pat added. “Industry recognized and addressed a lot of the concerns of regulators to build confidence.”

Katie made the point that operators coming to Pennsylvania from southwestern United States were no better prepared for the “vastly different landscape,” in terms of topography, politics, and public perception of the gas industry that DEP was to deal with them. The formation of the MSC, she suggested, allowed people to begin working together across the entire supply chain and brought companies into the conversation that had never worked with natural gas.

Cabot was proud to be at the forefront of that revolution. It was incumbent upon us to show off our operations to others, including other companies and regulators. We did things differently in Pennsylvania than in other states.

More than 10 years later, energy prices are lower, emissions have been reduced well beyond requirements, thousands have family-sustaining jobs, and billions of dollars have improved local economies. Yet “staying ahead of the narrative,” as Pat put it, remains a constant challenge. “We have to continuously educated them and reinforce the benefits.” Let’s keep this conversation rolling.