The shale revolution is moving fast in New Mexico as oil production soars and natural gas is on a major upswing, bringing the benefits to yet another area.

New Mexico is now the nation’s third largest oil-producing state, after Texas and North Dakota, with revenue from oil and gas production accounting for 39 percent of all state general fund revenues in fiscal year 2019—the highest share recorded in recent history. Government economists project $797 million in “new money” for the fiscal year 2021 budget that begins in July. Yet, despite this economic boom in a state that could use the funds, many of the 202 Democratic presidential nominee contenders want to ban fracking and/or oil and gas drilling on public lands. 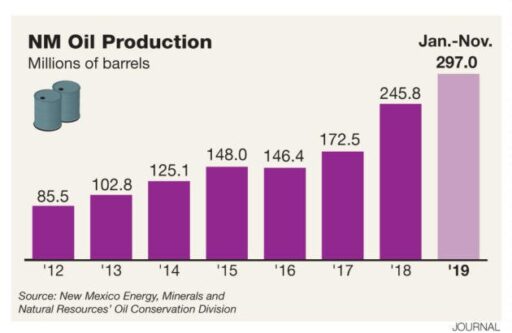 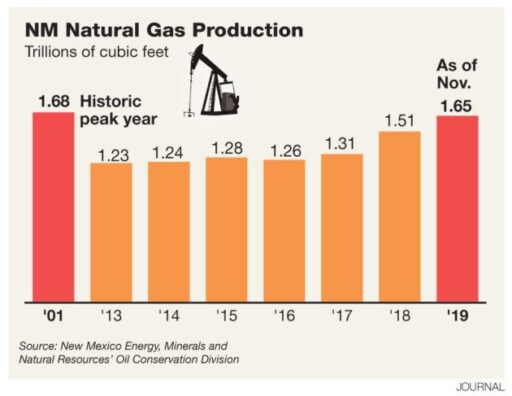 While the Permian basin has revived natural gas production in New Mexico, the San Juan basin, where gas production had previously flourished, is now experiencing fairly flat production due to depressed prices for natural gas. In late January, the wholesale price for natural gas dropped below $1.90 per thousand cubic feet—its lowest level since March 2016, due to a moderately warm winter and national gas storage levels that are 20 percent higher than at the same time last year. There are about 25,000 wells still operating on New Mexico’s side of the San Juan, but about 80 percent are considered marginal wells that produce less than 90 thousand cubic feet per day.

With continued growth, the industry’s contribution to the state’s gross domestic product could triple and local and state revenues from the industry could more than double. The oil and natural gas industry contributed an estimated $13.5 billion to New Mexico’s gross domestic product (GDP) in 2017, representing 14 percent of the overall GDP. According to the study, it could increase to as much as $60 billion by 2030, or 45 percent of GDP. The study also noted that industry contribution to state and local governments could be as high as $8 billion annually by 2030.

New Mexico’s oil and gas industry is expected to keep growing at a record pace, resulting in more revenue for the state and billions of dollars in new infrastructure investments to get the products to market. New infrastructure investments include new pipelines, access roads, well pad construction, processing plants, and refineries. Along with the investment and production growth come jobs not only in the oil and gas industry but also in adjacent industries that are needed to support the influx of workers. These jobs would be a boon to the residents of New Mexico. It is unclear how those vying for the Democratic presidential nomination, who want to ban fracking and production on public lands, could create an equivalent boom with their proposed policies.