New York State energy and environmental policy is more about optics than facts.  Nowhere is this more apparent than the recent spate of opinion pieces, reports, and even policy proposals related to peaking power plants.  I evaluated the basis of these items in a series of three posts but because they are very technical I have elected to summarize this issue in this post. 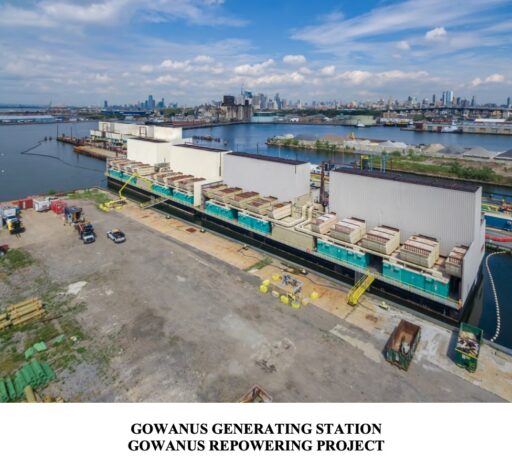 I think this is an important because the vilification of peaking power plants is getting all sorts of undeserved attention.  Although the peaking plants are alleged to be a primary driver of the environmental burden in neighboring environmental justice communities that is unlikely to be the case.  Combine that with the enormous costs of energy storage and the difficulty siting enough renewables within the city to replace these plants that means that a clean New York State energy “solution” is likely not in the best interests of society, particularly in the admittedly over-burdened environmental justice communities.

This post is a summary of three detailed technical posts.  The PEAK Coalition recently released a report entitled: “Dirty Energy, Big Money”.  My first post provided information on the primary air quality problem associated with these facilities, the organizations behind the report, the State’s response to date, the underlying issue of environmental justice and addressed the motivation for the analysis.  My second post addressed the rationale and feasibility of the proposed plan relative to environmental effects, affordability, and reliability.  Finally, I discussed the  Physicians, Scientists, and Engineers (PSE) for Healthy Energy report Opportunities for Replacing Peaker Plants with Energy Storage in New York State that provided technical information used by the PEAK Coalition.

I am a retired electric utility meteorologist with nearly 40 years-experience analyzing the effects of meteorology on electric operations.  I have been involved with the peaking power plants in particular for over 20 years both from a compliance reporting standpoint and also evaluation of impacts and options for these sources.  This background served me well preparing this post.  The opinions expressed in this post do not reflect the position of any of my previous employers or any other company I have been associated with, these comments are mine alone.

There are two drivers for peaking power plant issues.  To provide electricity to everyone who needs it when they need it the New York Independent System Operator (NYISO) has to balance power availability with the load on the system.  NYISO is responsible not only for the real-time deliver of power but also for reliability planning.  If the load did not vary this would be much less difficult but the reality is that load varies diurnally and seasonally.

Most important is meeting demand when loads are highest in the summer and winter when it is necessary to provide electricity to maintain the health and well-being of customers. Ultimately the problem boils down to the fact that there are short periods when so much load is needed that there are units dedicated by intent or circumstances to provide just that load during the year.  This is expensive and inefficient but is in my opinion a problem with no easy solution.

The second driver for this issue is that the hot and humid conditions that cause the high New York State energy use in the summer peak are also the conditions conducive to ozone formation and higher levels of PM2.5.  New York State has been working on the issue of emissions and air quality on high electric demand days specifically since at least 2006.  While there is an undeniable link between high energy demand and the high emissions that create peak ozone levels there is on over-riding requirement to keep the power on when it is needed most.

The reports both suggested that the payments for the peaking power were unreasonable.  The PEAK Coalition believes that these plants “receive exorbitant payments from utilities and other energy service providers just for the plants to exist”.  This is not my area of expertise but based on the turnover of ownership and other factors I don’t believe that they are the profit centers the PEAK Coalition believes they are.  Importantly, the units do run when power is needed most so there is a reason for them to exist.

I found that the basis for the technical aspects of the PEAK Coalition report is b work by Physicians, Scientists, and Engineers (PSE) for Healthy Energy.  PSE evaluated Federal data peaking power plants across the country based on fuel type, capacity, technology and how much they ran.  This is a blunt approach that cannot address any of the nuances that have resulted in some units running for short times.

In New York for example, there are simple cycle turbines in New York City that were built specifically to provide peaking power.  There also are some large oil-fired units that run little because their fuel costs are so high.  Off the top of my head I also note that there are units that burn oil and run only when needed due to natural gas supply constraints but there certainly could be other reasons some units run so little.  As a result the simplistic proposal for replacement is only valid for some of the facilities at best.

To prove the need for a clean energy alternative, PSE combined the peaking power plant data with ambient air quality data to show that the peaking plants often run at the same time that there are National Ambient Air Quality Standard exceedances which is a well-known fact.

However, I don’t think that the PSE approach made a convincing case that the peaking power plants are a primary driver of environmental burdens on neighboring communities.  Their vulnerability index lists other factors but makes no attempt to attribute impacts to each factor.  The ultimate problem with this approach is that the peak unit justification relies on environmental burdens from ozone and particulate matter air quality impacts.  However, ozone is a secondary air pollutant and the vast majority of ambient PM2.5 from power plants is also a secondary pollutant.

As a result, there is enough of a lag between the time emissions are released and creation of either ozone or PM2.5 that the impact is felt far away.  That means that the accused peaking power plants do not create the air quality impact problems alleged to occur to the environmental justice communities located near the plants.  In fact, because NOx scavenges ozone the peaker plants reduce local ozone if they have any effect at all.

Dirty Energy, Big Money states “Experts have found—and real-world examples have proven—that battery storage and renewable generation may be less expensive to develop and manage than the rarely used but heavily polluting fossil fuel power plants, while also meeting or exceeding the same performance standards”.  This statement is just plain wrong as I showed in detail.

As soon as energy storage is added to the renewable “solution” the projected costs rise exponentially and there are no real-world examples supporting this as a proven policy approach.  Moreover, the difficulties and cost of siting enough renewable energy within New York City to meet the in-city generation requirements also suggest enormous costs.

New York’s irrational war on natural gas continues in this vilification of peaking power plants.  I do not dispute that there is a New York City peaker problem where old, inefficient combustion turbines designed to provide peak power are being used to provide critically needed power when needed most. To force their replacement the New York State Department of Environmental Conservation (DEC promulgated new  limits for the simple cycle turbines such that they will be required to install controls or shut down. They should be replaced and probably should have been replaced long ago so the question is why hasn’t this happened.

In my opinion the continued operation of the old simple cycle turbines in New York City is the result of New York’s de-regulated market place.  I am absolutely sure that in a regulated environment the responsible utility would have made a case to the Department of Public Service that replacement with cleaner, more efficient generation was needed, the Department would have agreed  and after it was approved the utility would have been guaranteed a reasonable return on their investment.

However, in the de-regulated market there wasn’t a strong enough financial incentive to replace the old units.  Before I retired in 2010, I worked on two separate permit applications for new, efficient, and cleaner replacement power for one set of the old combustion turbines.  In both instances the permits were approved but the replacements were never built, apparently because the company decided that the business case was not strong enough to warrant the investment.

According to the plans submitted to comply with DEC’s peaking power plant rule only one company is planning to build replacement peaking power. I fear that in today’s political climate that the proposed re-powering of Gowanus will not be permitted because it is new fossil fuel infrastructure.  However, it is fundamentally different inasmuch as the proposed plant is on a barge.  If New York aspirational climate agenda works out is won’t be needed and then it can simply be moved away to another location to serve as a bridge source of energy elsewhere.  However, I am unconvinced that the clean energy alternatives proposed will work, much less be affordable.  Therefore this proposed project is invaluable insurance for reliability and affordability.

The claims that peaking power plants are dangers to neighboring environmental justice communities are based on emotion.  In the evaluation I did of the PSE analysis and the PEAK Coalition report, I found that the alleged impacts of the existing peaking power plants over-estimates impact on local communities relative to other sources.  The existing simple cycle peaking turbines in New York City are old, inefficient and much dirtier than a new facility and clearly should be replaced.

However, they reliably produce affordable power when needed most.  To maintain that affordability and reliability I think it is best to rely on a proven solution such as the proposed Gowanus re-powering project.  The solar plus energy storage approach advocated by PSE and the PEAK Coalition will likely increase costs significantly if it works.

I cannot over-emphasize the fact that it may not work because solar and energy storage is not a proven technology on the scale necessary to provide New York City’s peaking power requirements.  Sadly in the rush to prove politically correct credentials this unproven technology may be chosen despite the risks to power reliability.