The National Oceanic and Atmospheric Administration stated the environmental impact of a proposed liquefied natural gas terminal and pipeline in southern Oregon would be minimal, The Associated Press reported Sunday. 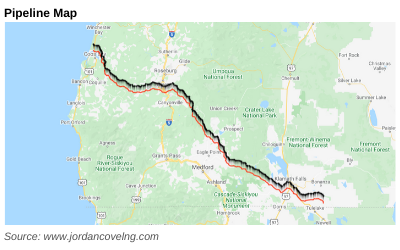 NOAA said its review shows the affects of the proposed Jordan Cove LNG export terminal and a 230-mile feeder pipeline along Coos Bay would be short term or on a small scale, and dispersed broadly across 250 miles, Kallanish Energy learns.

The terminal in Coos Bay would be capable of liquefying up to 1.04 billion cubic feet of natural gas per day for export to markets around the world.

The biological study done by NOAA scientists reviewed 17 species listed under the U.S. Endangered Species Act and their critical habitats, including whales, sea turtles, salmon and other fish species.

In November, the Federal Energy Regulatory Commission’s staff in its final environmental analysis concluded the project would likely have an adverse affect on wildlife, including 18 federally-listed or proposed threatened and endangered species.

The proposed marine terminal, in Coos Bay, would allow export of American LNG to Asia, fed natural gas via the 230-mile feeder line from an interstate gas hub in Klamath County, Oregon.

The agency’s commissioners are expected to vote on the final order on Feb. 13, though the project also needs numerous state, federal and local approvals before construction can begin.

Project opponents have emphasized that the project was earlier rejected by the regulatory commission in 2016 because backers couldn’t demonstrate a public need for the project that outweighed its impacts on landowners affected by the proposed Pacific Connector pipeline, which would stretch across much of southern Oregon.