North Face Does A Politically Correct, But Stupid, Face Plant

[Editor’s Note: North Face imagines its customers are idiots and wanted to look like a green hero to them, causing it instead to do a face plant in the snow.]

Innovex Downhole Solutions ordered 100 jackets for its workers as Christmas gifts from popular outdoor recreation and clothing giant The North Face. But North Face turned its face away and told Innovex because the company is part of the nasty fossil fuel industry, North Face would refuse to fulfill the order. In essence, North Face told Innovex to go screw itself. [Yes, it’s time to boycott The North Face and refuse to buy anything from them, and if you get a Christmas present manufactured or sold by North Face, please return it and let them know why you want a refund.] 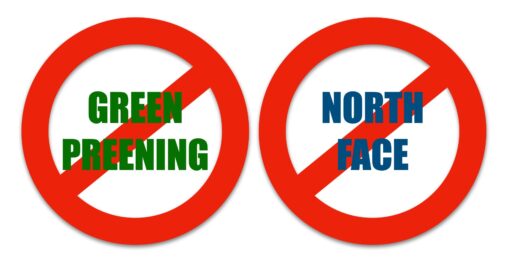 But it’s not the overt fossil fuel bigotry displayed by The North Face we want to concentrate on. It is the response by Innovex CEO Adam Anderson that desNNorth Faceerves your attention. Anderson composed a four-page letter to North Face about the oil and gas industry’s importance to modern life, including the economic life of The North Face. In fact, the very jackets North Face produces that Innovex wanted to buy are made from petrochemicals–the very oil and gas Innovex helps to draw from the ground. Ironic, no?

Anderson’s timely letter has “gone viral” and is being shared far and wide. The letter is superb and something you can share with idiot relatives this Christmas who maintain we can dump the use of fossil fuels and go “all renewable.” What a sick joke. Here’s the story:

Innovex Downhole Solutions says it was recently denied an order of jackets by The North Face, a popular outdoor recreation company because they are in the oil and gas business.

“I was surprised but not surprised if that makes sense,” Innovex CEO Adam Anderson said.

Innovex is based in Houston and has nearly 100 workers in the Permian Basin.

Each year, the company gets a Christmas gift for its employees. This year, it was supposed to be a North Face jacket with an Innovex logo, a company Innovex has ordered gear from in the past.

“They told us we did not meet their brand standards,” Anderson said. “We were separately informed that what that really meant is was that we were an oil and gas company.”

The irony of The North Face denying service to an industry that provides its ability to make and sell its products isn’t lost, either.

“The recreational activities they encourage are all ones that require hydrocarbons to make the products, to provide the means to get to whatever activity folks want to perform,” Anderson said. “It’s just so intertwined with everything that we do.”

Everything is right. It’s a position Anderson wants to convey to The North Face and the rest of the world. So, he responded to The North Face via LinkedIn, penning a 4-page letter about the oil and gas industry’s importance to modern life. It quickly went viral.

“Hydrocarbons are important not only to energy but to most the products we consume and utilize today,” Anderson said.

Innovex still got the jackets but through a different outdoor recreation company.

Anderson isn’t mad but hopes the situation can help create a dialogue about oil and gas’s importance.

“I think there’s a view out there in the world that’s increasing that says, ‘Oil and gas are bad,’” he said. “And I just fundamentally disagree with that view in every dimension.”

Editor’s Note: This episode reminds of Patagonia’s cynical green preening, the hypocrisy of which, of course, they wear like a badge of honor demonstrating they’re just so morally right and important they can afford to flaunt it. Worse, though, are the customers stupid enough to buy into the big lies for the sake appearing politically correct among their similarly shallow valued friends. Patagonia wearers already get the cold stare when they walk into my house and now North Face wearers will as well. Meanwhile, consider some of Adam Anderson’s reaction (emphasis added):

• Oil and natural gas are the only viable sources for low-cost, reliable energy today.

• Wind, solar and many other alternatives suffer from an intermittency problem that has not yet been solved.

• Any attempts to move our energy consumption to these unreliable, higher-cost sources of energy will have many negative impacts for humanity as it will dramatically decrease our access to low-cost and reliable energy.

• For example, Germany has endeavored to transition their energy grid to alternatives such as wind and solar with disastrous consequences. Electricity costs in Germany have tripled over the last 20 years and are roughly 2x the US costs (which are themselves elevated due to the partial shift to unreliable, intermittent sources of energy in the US.

• Oil and natural gas are used in many other important ways to create materials that go into thousands of critical products including, clothes, smart phones, vehicles and life-saving medical devices.

• Lastly, the Oil and Gas industry is a bastion of high-quality, high-paying, industrial jobs for our people. Last year, lnnovex employed ~650 people and paid our employees an average salary of >$85,000 per year. More than 230 of our employees earned over $100,000 last year. The majority of these individuals do not have a college degree and achieve these high levels of income due to their intelligence, dedication and work ethic. We need more high-quality jobs staffed with individuals like my team members in this country, not fewer.

Frequently people are concerned about the impacts of CO2 released from the burning of hydrocarbons.

I acknowledge that CO2 is a greenhouse gas and modest increases in CO2 level will have modest impacts on global temperatures. However, I think the climate catastrophists who claim we will endure dramatic negative impacts from these changes are terribly wrong and misunderstand how low cost energy can help us adapt to our ever changing climate:

• The US Oil and Gas Industry has enabled an ~14% reduction in US CO2 emissions over the last decade, largely as a result of significant growth in Natural Gas production.

• Climate related deaths have declined ~90% since the beginning of the 20th century as a direct result our society is more robust against floods, draughts, storms, wildfires and extreme temps.

• This greening combined with incredible technological progress enabled by low cost and reliable energy has led to a dramatic decrease in death by famine. The death rate due to famines has declined by more than 95% over the last century.

At this point, you may wonder why I am directing this letter to you, the CEO of one of the world’s largest apparel companies. We recently contacted North Face to inquire about buying jackets with the lnnovex logo for all of our employees as Christmas presents. We viewed North Face as a high-quality brand that our employees would value and cherish for years to come. Unfortunately, we were informed that North Face would not sell us jackets because we were an oil and gas services company.

The irony in this statement is your jackets are made from the oil and gas products the hardworking me and women of our industry produce. I think this stance by your company is counterproductive virtue signaling, and I would appreciate you re-considering this stance. We should be celebrating the benefits of what oil and gas do to enable the outdoors lifestyle your brands embrace. Without Oil and Gas there would be no market for nor ability to create the products your company sells.