NY’s Green New Deal: Not Really Much of a Plan at All

Governor Cuomo’s Green New Deal has ambitious goals, but it is full of uncertainties and in no way could be fashioned into a plan.

This is one of a series of posts on Governor Andrew M. Cuomo’s New York State Green New Deal. The announcement noted that it will create the State’s first statutory Climate Action Council, comprised of the heads of relevant state agencies and other workforce, environmental justice, and clean energy experts to develop a plan to make New York carbon neutral.  Not mentioned was the fact that there was a previous Climate Action Council that was not created by statute. This post will highlight the draft plan produced by the first Climate Action Council in late 2010.

According to the New York State Department of Environmental Conservation (DEC):

Executive Order No. 24 set a goal to reduce greenhouse gas (GHG) emissions in New York State by 80 percent below the levels emitted in 1990 by the year 2050. The Executive Order also created the New York State Climate Action Council (CAC) with a directive to prepare a climate action plan. The climate action plan would assess how all economic sectors can reduce greenhouse gas emissions and adapt to climate change. The Plan would also identify the extent to which such actions support New York’s goals for a clean-energy economy. 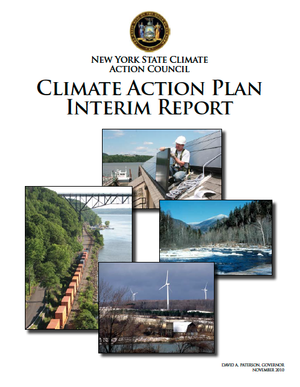 On November 9, 2010, the CAC released an Interim Report that had been prepared with assistance from the New York State Energy Research and Development Authority (NYSERDA), the Department of Environmental Conservation (DEC), and other CAC member-agency staff, the Center for Climate Strategies (CCS) and other stakeholders. This Interim Report is presented by sections and chapters at the DEC website.

For my purposes, Chapter 4: Envisioning a Low-Carbon Future is of most interest. This effort is based in large part upon a Brookhaven National Lab white paper entitled Envisioning a Low-Carbon Clean Energy Economy in New York. The ultimate question is whether the earlier New York State 80 by 50 goal is feasible not only based on cost but on technical considerations. I had originally intended to dissect this vision of the future to address those points but I think the following Important Note to Readers from the white paper speaks to my concerns. I have highlighted the critical point.

The Council’s mandate is uncommonly broad in scope. It has a planning horizon far longer than what most planners address. It entails large uncertainties. No clear precedent for an enterprise of this scope exists.

Consequently, this draft paper is necessarily provisional. As the planning process proceeds, the paper will be revised, and it will steadily gain in value as fresh insights are acquired and the knowledge base it draws from expands.

One feature of this paper is a description of three scenarios that illustrate different versions of a low-carbon 2050 future for the state. It’s important that readers understand that these scenarios are offered for illustrative purposes only. In no sense do they constitute the elements of a plan, and indeed even a casual review of them reveals that there is no way in which they could be fashioned into a plan. Rather, they’re intended to facilitate and provoke thinking about the future.

We hope other parties will generate their own 80×50 scenarios and share them. The ability to imagine a sustainable future, model it rigorously, and explore it is as vital to achieving that future as the clean-energy technologies, best management practices, and behavioral changes that must be developed, advanced, and adopted.

The Brookhaven White Paper developed three future scenarios. One scenario expanded on existing programs to make the most obvious emission reductions. Although it assumed “significant changes to current practices, this scenario falls far short of achieving 80 percent emissions reduction by 2050.” The second scenario assumed electrification of the entire light-duty vehicle fleet to hydrogen fuel produced with nuclear or other low-carbon electricity, elimination of fossil fuel combustion in the residential, commercial, and industrial sectors and significant use of locally-sourced biofuels for trucks and aircraft but was only able to make a 79% reduction.

In order to get to an 80% reduction the final scenario assumes 95% of all vehicle miles are all-electric miles, eliminates fossil fuel combustion in the residential/commercial/industrial sector with “part of the resultant increase in electricity demand met through local, point-of-use solar and much of the remainder with low-carbon generation and the wide-spread use of carbon-capture and sequestration”.

It does not take much effort to come to the same conclusion as Brookhaven that there is no way that these scenarios could be fashioned into a plan. Ultimately, the question is whether there is any possible plan to meet the ambitious goals of New York’s Green New Deal.