Green new dealers always make it sound as if their projects face no obstacles, have no impacts and are widely desired but Ocean City shows that’s not true.

The Maryland Public Service Commission (PSC) approved two offshore wind projects off the coast of Ocean City in 2017. But, Ocean City officials want the wind farms to be sited at least 26 nautical miles off the coast—a distance such that the wind turbines would not be visible from the shoreline. One developer, US Wind, agreed to place its turbines no closer than 17 miles from the coast and the other developer, Deepwater Wind, would locate its wind turbines about 17 to 21 miles offshore. Neither has agreed to the 26 miles requested by the local people.

The council asked the mayor of Ocean City, Rick Meehan, to write a letter to the Governor of Maryland, Larry Hogan, confirming that Ocean City is not opposed to the concept of offshore wind farms, but the turbines need to be sited at a distance from which they would not be visible from the shore. 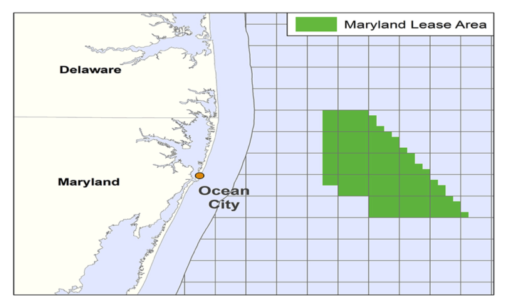 The letter also points out that the commercial fishing industry, the maritime transportation industry, the Coast Guard, and the Department of Defense have expressed opposition to offshore wind turbines. The letter claims offshore wind can hinder radar operation, impacting Coast Guard search and rescue efforts and national defense radar installations.

Another issue is that one of the town council members wants the wind turbines to be located 33 miles offshore. The justification for the further distance is that technological advances since the original approval of the projects resulted in the development of much taller turbines capable of producing even more energy, but needing a greater distance from shoreline not to be seen by resort visitors. The turbines can be as much as 12 megawatts each and over 500 feet tall, rather than the 2 megawatt, 200-feet high turbines originally discussed in 2012.

The other Ocean City offshore wind builder, Orsted, however, will use the 12-megawatt turbines that are 853 feet tall. The Skipjack Wind Farm will consist of about 15 turbines and be 19.5 miles off the Maryland coast.

The next step in the US Wind project is the installation of a 328-foot tall meteorological tower that arrived in mid-September to be located a little over 14 miles off the coast of Ocean City—about in the middle of the company’s approved Wind Energy Area. The tower will be used to collect wind resource data within the Maryland lease area in advance of the future installation of as many as 32 large offshore wind turbines. The installation of the meteorological tower was originally scheduled for July, but the project was pushed back for several reasons, including storm activity in the Gulf of Mexico, where the tower was being delivered, in August, and the threat of hurricane activity.

The Ocean City Council is Persistent

The prolonged battle between the city and the state included at least two formal resolutions passed by the Mayor and Council, endless discussions on how to address the wind turbine distance, a letter-writing campaign, and a bill in the Maryland General Assembly that would force the siting of the wind turbines at least 26 nautical miles offshore. But those efforts have not changed US Wind’s plan to site the wind turbines 17 miles off the coast. To date, there has not been a single public hearing conducted in the Ocean City corporate limits by any regulatory agency to listen to the concerns of the citizens regarding the wind towers. However, there are still several federal regulatory hurdles to overcome for the two proposed wind energy projects since they are in federally-owned waters, so there will be additional opportunities for Ocean City’s officials to comment.

One of the first large offshore wind projects expected to be built is off the coast of Martha’s Vineyard in Massachusetts. However, Vineyard Wind, the developer, is facing permitting challenges and it expects a federal environmental review of the facility to be delayed until the end of the year. The Department of Interior indicates that proposed offshore wind facilities are major infrastructure projects that must undergo appropriate review and approval. The department is continuing to incorporate feedback received on the Draft Environmental Impact Statement and is working closely with cooperating agencies to facilitate the environmental review of the project. Vineyard Wind is the first major development to reach the final stages of permitting and has the potential to set regulatory precedent for large projects under consideration for development in New York, New Jersey, Maryland, and other states.

One of the hurdles is that NOAA Fisheries, a division of the National Oceanic and Atmospheric Administration in the Department of Commerce, criticized the draft study, indicating that it did not adequately consider the project’s potential impact on fisheries or provide the mitigation efforts needed to compensate fishermen. According to some fishing companies, this is the first time officials in Washington, D.C. have seriously considered their concerns. Further, NOAA Fisheries’ comments create a potential legal opening for opponents to sue and stop the project.

Part of the timing issue for wind developers is that the federal tax credit for wind expires at the end of this year. The project had anticipated taking a 24 percent tax credit on $2.8 billion in capital costs. The tax credit is what makes these projects feasible since offshore wind is one of the most expensive forms of supplying electricity. Projects can still qualify for the federal subsidy, however, if they can show they began construction this year, but satisfying the IRS requirements needed to secure that credit may not be straightforward.

The Department of Interior has 3 ongoing studies related to the Maryland offshore wind farms:

The town council of Ocean City, Maryland is displeased regarding the location of the wind farms to be constructed offshore. The wind turbines are planned to be as close as 17 miles from shore, while the council wants the turbines sited 26 to 33 miles offshore, depending on the technology. There are still federal regulatory hurdles before final approval of the wind farms and construction can take place. But, the federal tax credit that make these expensive offshore projects feasible may be an issue since it expires at the end of this year.