Offshore wind projects make little environmental and no economic sense. They are boondoggles and reflect the rent-seeking corporatism behind climate policy.

Despite its high cost, states along the Atlantic coast from Massachusetts to Virginia are planning to invest in offshore wind. Massachusetts is preparing to obtain power from more than a score of huge wind turbines off its coast, carried to the mainland by underwater cables, with the cost passed through to households and businesses. 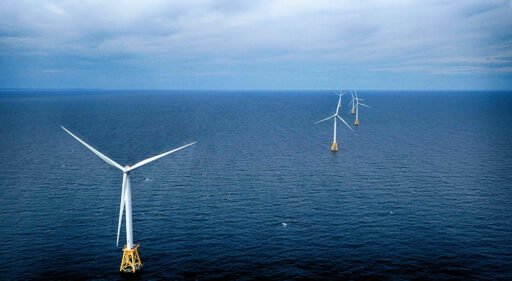 To date, the nation’s only offshore wind turbines are located off the coast of Block Island, Rhode Island. The Block Island Wind Farm went into operation in late 2016, costing $300 million—$10,000 per kilowatt—for five wind turbines totaling 30 megawatts of capacity. Operating and maintenance expenses for offshore wind farms currently add about $80,000 per megawatt each year, according to the Energy Information Administration.

Despite its high cost, this wind farm is perhaps the only project made at least some sense since Block Island had relied on high-cost electricity generated by diesel generators that obtained their fuel from floating tankers ferried across 18 miles of water. Meanwhile, though, Rhode Island is planning another offshore wind project—an 84-wind turbine farm in waters south of Martha’s Vineyard, costing $2 billion-plus $16.7 million to compensate companies that lost access to fishing grounds.

Virginia’s State Corporation Commission approved a project to construct 12-megawatts of wind turbines 27 miles off the coast of Virginia Beach in federal waters. The plan is to have the wind turbines operating by the end of 2020, making that project a steppingstone to the state’s goal of 2 gigawatts of offshore wind by 2028. The project is intended to determine how the technology works and performs in the Atlantic Ocean, with its potential for hurricane-force winds.

New Jersey’s Ocean Wind project is expected to begin construction in early 2020. The Ocean Wind project offered a first-year Offshore Wind Renewable Energy Certificate price of $98.10 per megawatt-hour—which represents costs paid by ratepayers before they are refunded for energy and capacity revenues generated from the wind project. That price is two to three times more than the cost of generating power from existing coal, nuclear, and natural gas resources. The Ocean Wind project is expected to result in an estimated monthly increase on utility bills of $1.46 for residential customers, $13.05 for commercial customers, and $110.10 for industrial customers. It is estimated that the project will create over 15,000 direct jobs during its 25-year expected life and generate $1.17 billion in economic benefits.

New Jersey’s Ocean Wind project is a major step toward fulfilling Governor Phil Murphy’s promise to install 3,500 megawatts of offshore wind by 2030. Governor Murphy has directed the state’s regulators to solicit 1,200 megawatts in 2020 and 2022. New Jersey’s offshore wind will be subsidized through charges on ratepayers’ utility bills.

The 328-foot tall meteorological tower, in roughly the middle of US Wind’s approved Wind Energy Area, will be used to collect wind resource data within the Maryland lease area before the 32 huge offshore wind turbines are installed. The installation of the met tower will begin in mid-July with a construction schedule of about 10 days. The tower will have a braced caisson foundation sunk at a water depth of 88 feet, a steel deck, and a galvanized steel mast. The construction area will include a lift barge, cargo barge, a tow tug, and several crew boats. US Wind requested a 500-meter safety buffer during the tower construction. The project is expected to create roughly 7,000 direct and indirect jobs in Maryland including an in-state investment of nearly $1.5 billion.

Ocean City wants the turbines to be sited 26 miles offshore where they should not be visible by tourists on the coast. The town council believes visible turbines would have a detrimental impact on the views from the Ocean City shore and on property values. The council is also not happy with the timing of the meteorological tower installation because it is so close to the White Marlin Open held in early August. Commercial fishermen are concerned about losing equipment and that the construction and noise will scare fish and other seafood away.

State politicians and regulators are going ahead with offshore wind farms despite their cost, impact on ratepayers, and concerns of fishermen and city councils. The tourist industry is a major contributor to the economies of Virginia Beach, Atlantic City, and Ocean City where the wind turbines are to be located. Increasing the cost of power, disrupting views, and scaring away sea life will not help those economies continue to flourish.

Editor’s Note: Climate change has been the consistently poor excuse for these boondoggle projects that will accomplish nothing but raising electricity costs to reward developers and pandering politicians with someone else’s money. If these parties were truly concerned abour climate change they’d be evaluating alternatives and natural gas would come out on top as the least costly and most effective way to make a difference. But, there wouldn’t be any government rent-seeking or graft in that, would there? So, the proponents push to impose such projects with this sort of predictable result:

The Edgartown Conservation Commission on Martha’s Vineyard voted this week to deny Vineyard Wind’s application to lay transmission cables that would pass about a mile east of Edgartown.

Separately, the federal Bureau of Ocean Energy Management has delayed issuing a final environmental impact statement that would help clear the way for construction of the 84-turbine, 800-megawatt wind farm.

The project is key to a 2016 state law aimed at boosting supplies of renewable energy.

The Edgartown board was concerned Vineyard Wind had not provided assurances against “adverse effects” from the cables, saying the area is critical for the protection of marine fisheries, flood control and protection of wildlife habitat.

Vineyard Wind said Friday it will ask the Massachusetts Department of Environmental Protection to override the Edgartown decision.

More delay and more money from other people’s pockets on the ridiculous theory this is somehow the way to deal with climate change. Meanwhile, unsubsidized natural gas is the only thing that has served to reduce CO2 emissions in the real world. It tells us everything, doesn’t it? It’s about the government rent-seeking and the graft.